Op-amp circuit voltages after power off

Following up interesting discussion here with John Birckhead (@JohnBirckhead), I decided to ask separate question on the issue.

The circuit includes UDA1334BTS, DAC powered from +3.3 V, connected using its typical application diagram (see page 16, fig. 8) and AD8512 op-amp, powered from ±12 V. Initially we were troubleshooting the problem of my circuit not working with two new op-amp chips, with chips looking like defective or damaged.

John proposed that while circuit looks good, there's a problem when it is being turned off.

Capacitors C66 and C57, which are of 47 uF value, discharge too slowly through DAC output and 220k resistors of respective channel; when system is turned off, ±12 V supply is removed very quickly, but potential capacitors are charged to remains for next several seconds, violating condition explained in datasheet that

[AD8512] have internal protective circuitry that allows voltages as high as 0.7 V beyond the supplies to be applied at the input of either terminal without causing damage.

Let's look what is going on in my circuit: 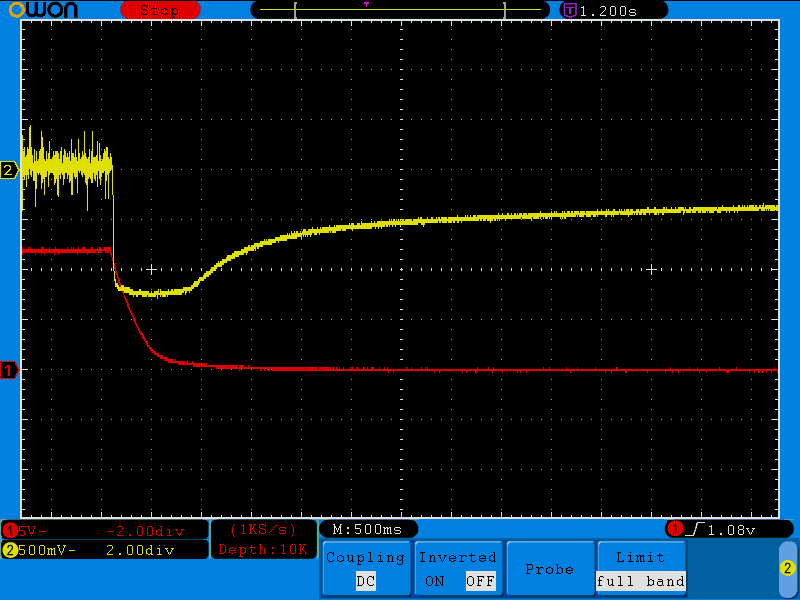 We can clearly see that power goes off exponentially (red), at the same time op-amp's input is about -1.2 V.

However further datasheet states that

For higher input voltages, a series resistor is necessary to limit the input current. The resistor value can be determined from the formula (Vin - Vs)/Rs ≤ 5 mA.

I am confused here - what matters - over-voltage, or over-current? In my circuit there's series resistor of 100 Ohm, when power if completely gone current flowing through resistor (approximately) ( -1.2 V - 0 ) / 100 = 12 mA, higher than required by datasheet.

I want to know your opinion - is there any other way to mitigate this effect? I think I did not see many circuit diagrams having diodes before op-amps.

As a side note, I have old computer with mixer (NJM4558-based)

and it also exhibits these issues when powering on or off, but, as far as I can see, voltage on its op-amp input goes down relatively the same rate as power voltage. In my case input voltage is too long outside of allowed range relative to power.

The diodes as shown are going to cause some distortion at higher signal levels.

You can meet the input current limit requirements by changing the resistors R45/R28 to 1K and decreasing C67/C58 to 1000pF. That maintains the same RC time constant and limits the worst case current (which is 3.3V/1K) to less than 5mA.

If you do add diodes, they should be to the supplies of the op-amp not to ground. For example, you could use a BAT54S and connect it to the input and to the +/-12V supplies. It's not necessary in this case, however.

The input stage (for each input) will look something like this: 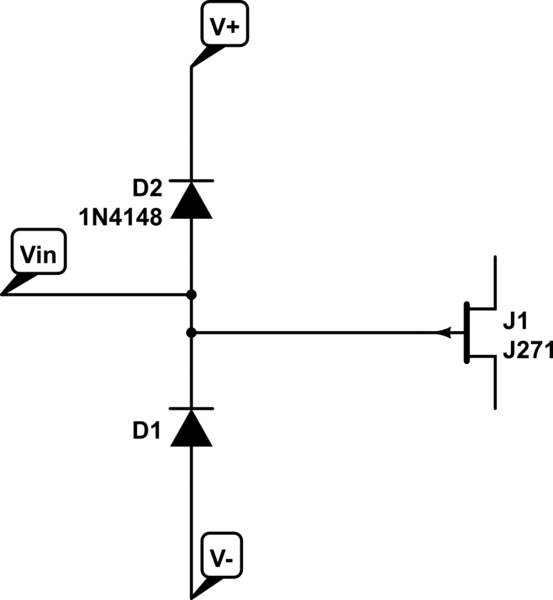 D1 and D2 are clamping diodes, and cannot handle more than 5mA continuous (a fairly typical situation), so what matters is self-heating in these diodes. These are standard silicon diodes in this instance (the 0.7V rating gives it away).

This is sometimes listed as the maximum pin injection current, incidentally.

It really is not at all unusual to see external clamp diodes (use Schottky devices) on input to prevent the amplifier input voltages achieving a voltage so that the internal clamps do not turn on when it is not practical to use series resistors.