A question on temperature regulation of a nichrome wire

A heating-nichrome-wire will be heated by conducting unipolar PWM currents switched by a MOSFET with an adjustable duty cycle. I will first calculate the heat required from this calculator and find the current required. This will be the target current in the rest of my setup. In that formula the current is continuous DC. In my case should I calculate the Irms of the current?

I will sense the current as in the illustration below: 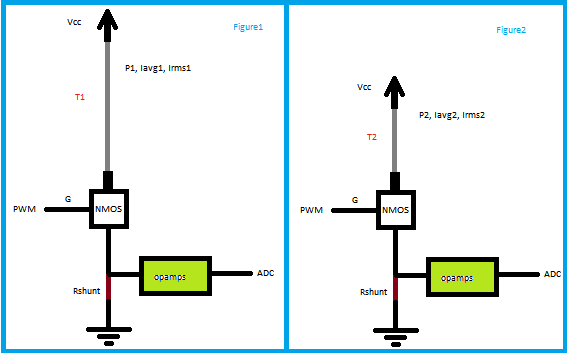 Above the green section is basically two op amps which will low-pass-filter/integrate and amplify the voltage across the shunt resistor to be read by ADC of the uC. So I can calculate the current knowing the op amps' gain and the Rshunt values. For better accuracy I will subtract the offset(coming from the input offset voltages) at the beginning when the MOSFET is off.

So since the current is pulsed and I will send the integral of it to the ADC. What I actually send is the data about the average voltage or current values for the Rshunt.

So logically if the wire length changes, the duty cycle also should be adjusted by the uC. Otherwise it will pass excessive current or not enough current. The data read by the ADC somehow should be used to adjust the duty cycle. This is the programming side.

In my case, regulating the PWM current's average or rms value to a pre-set value should be used?

And is that all? Is temperature only related to current in this case? Length has no significant effect? (Electrical power changes by the length of the wire if the current is kept the same; but in this case I want to keep the temperature same in any length)

Is the hotwire's temperature proportional to the Iavg or Irms.

\$ I_{RMS} \$ is the current which will give the equivelant heating to the same DC current so that's what you want.

But if the temperature is directly proportional to Irms ...

Power is directly proportional to \$ I^2R \$. Nichrome has a positive temperature coefficient (check this is true) so R won't be constant.

Stable temperature will be the point at which electrical power in = power lost from the wire. If the latter is not constant then temperature won't be either.

In my case, regulating the PWM current's average or rms value to a pre-set value should be used?

I would be inclined to regulate to wire resistance. That way you are controlling to a temperature. Measure both current and voltage, calculate resistance and control to that.

Is temperature only related to current in this case?

Length has no significant effect?

There'll be some additional cooling at the connectors. The shorter your heating wire the more significant these become.

If I could use a differential amplifier and measure the average voltage across the nichrome as well as the current. How would you formulate the temperature?

Take a reference reading after the power has been off for enough time to reach room temperature. Call this 100%. Measure the resistance thereafter, calculate the percentage increase in resistance and use a lookup table or linear approximation to calculate actual temperature.

I'm kind of confused. Some comments under my question mention the current is proportional to the heat of the wire. See also this link: hotwirefoamcutterinfo.com/_NiChromeData.html It says in a paragraph: "Know that it is the CURRENT not the voltage nor the wattage that heats your wire. Rather, it is the actual passing of current through the wire that ultimately determines its temperature."

The article is a little short on correct technical explanation. The last line is confusing because V and I are related by R. What they are trying to get across is that controlling the current means that you get the same result (for a given wire gauge) independent of the length. If you were controlling by voltage you would need to adjust the voltage to suit the length of the wire.

This comment is the first mention of foam cutting. I suspected that might be your application and that's why I spoke of power. There are a few points to note:

Rather, it is the actual passing of current through the wire that ultimately determines its temperature."

Again, the current sets the power. The temperature depends on what's happening outside the wire.

I think you shouldn't over-complicate your design. Make your power controller adjustable and add some sort of current indicator - maybe just your multimeter - in series with the wire. Find a current value that works for your foam cutting speed and write it down!

There are several distinct parameters here. These are the temperature of the wire, power into the wire per unit length, average current, and RMS current. None of these are the same.

However, the temperature resulting for a particular power is not so simple. For one thing, it varies depending on the conditions the wire is subjected to. As a obvious example, consider wire with a constant current going thru it in still air and in significant wind. The latter will be cooler, although the current is the same.

If you really want to regulate temperature, then you have to measure it and feed that back to the controller. One way to do that is to use the temperature coefficient of resistance. You monitor the voltage and current, compute the resistance, then determine the temperature from that.

If you would like to regulate the wire at a fixed temperature that does not have to be software adjustable, I would suggest using a bridge configuration to test whether the resistance is higher or lower than a reference. If the power isn't large, for example, and the resitance at the desired temperature would be 1K, you could do something like: 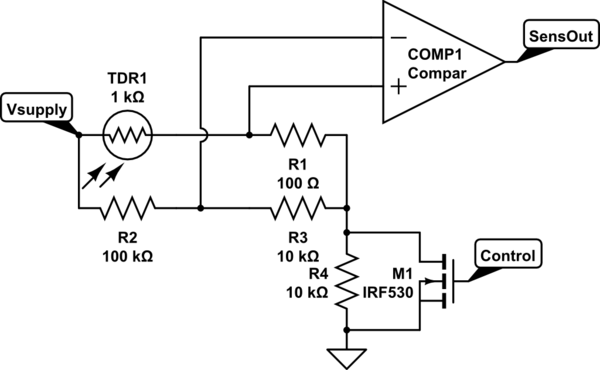 Not the answer you're looking for? Browse other questions tagged power current temperature wire or ask your own question.

-5
Using Electricity to generate the right amount of heat

17
How do I calculate the temperature rise in a copper conductor?
3
Design of a nichrome heating element - achieving predetermined power dissipation
7
How do I tell what gauge wire I need?
3
20AWG wire inductor and 8A, possible?
0
How do modern electric blankets implement thermal sensing/feedback?
3
nichrome wire not heating up
0
Design of supply for nichrome wire heater
1
Mosfet Temperature Rise: IRF4110 with 10% Duty Cycle Square Wave