Does a PNP transistor pull up itself?

Blog schematics for PNP transistors sometimes connect +5V to the emitter and a voltage divider between the base and an open drain output, and sometimes only connect a base resistor to the low side switch. In the simpler configuration will the current flowing from the emitter to the base pull up the base and turn off the transistor? How long will this take?

That's actually pretty easy. You have a schematic editor you could use here. I'll use it now. I've paired them, side by side, to match up with your pictures in your question: 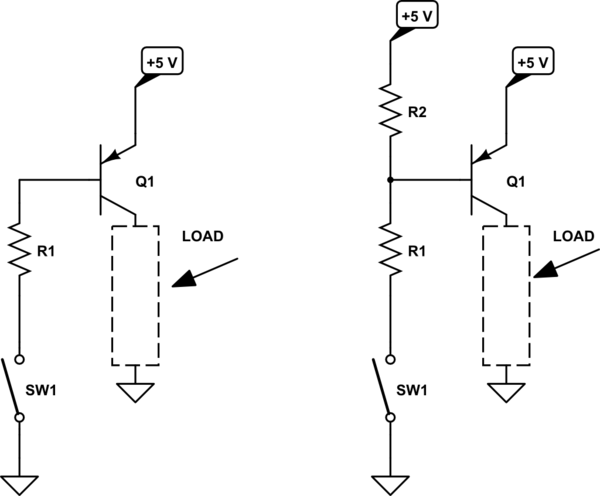 \$R_2\$ is used here as a "pull-up" of \$Q_1\$'s base. It's added security of a sort. For example, assume for a moment that there was an accumulated of dirt on the switch contacts which allowed a very slight current to flow across its contacts. Or that someone might be able to "brush by" and accidentally touch something that was connected to \$R_1\$ or directly to the base of \$Q_1\$ through dirt accumulation or other unintended means. Or also just realize that there may be very small capacitances which can hold a slight charge that might, for a moment, provide enough current at \$Q_1\$'s base to cause it to turn on momentarily.

To cheaply provide some added insurance against all of those cases, a "weak" pull-up resistor can be added to the circuit. This provides a way of pulling unintended charges away from the base of \$Q_1\$. Only when \$SW_1\$ is engaged fully and with definite intention will (then) enough current be supplied to overwhelm \$R_2\$'s weak action and turn the BJT on.

But both work when used in ideal situations. But adding the pull-up is cheap and it helps reduce the likelihood of unintended switching events when the situations are not ideal. (Which is most of the time.)

In normal situations (manual switch), there is no meaningful difference in speed between the two schematics. But even when a microcontroller is used to activate \$Q_1\$ as a switching device, there will usually be no meaningful difference in speed. When using a BJT as a highly saturated switch, like this, there is charge storage in the BJT that takes a certain amount of time to remove and a weak pull-up doesn't change it a lot. So for most uses, you can consider them of equivalent speed.

However, \$R_2\$ does improve the speed a tiny bit in practice. The stronger you make it (up to a point), the more improvement in speed you get. (This improvement will be in the turn-off time and NOT the turn-on time, which remains fast either way.) It still won't be that much of an improvement, though. In the end, you might normally see a few microseconds of delay in a turn-off and the improvement might be 10% or 20% of that time. (The actual percent of improvement will depend on details about the BJT device, itself.)

Here's a simulation to show you what's happening on the turn-off side:

In most cases, this is just added insurance and has nothing to do with improving speed. In some rare circumstances using a BJT as a switch like this (and as a hobbyist life it has never been a consideration), you might need that extra few hundred nanoseconds of speed in the turn-off time. (Perhaps to slightly improve the accuracy of the output duty cycle?) But there are better methods then.

Not the answer you're looking for? Browse other questions tagged bjt pnp or ask your own question.

0
PWM-controlled RGB LED is flickering when PNP transistor should be off. Any insights why?