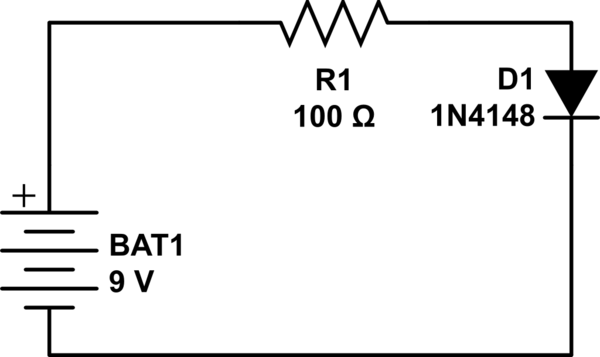 People are taught how to calculate this very simple thing, and the calculation goes from source plus to minus, and the diode is there to make sure the electricity flows in one direction.

However, we also know that electrons actually flow from the negative to the positive.

How does this actually work in real life?

Conventional current is the total flow of charged carriers.

It's rather metal-chauvinistic to concentrate on metals and get uptight about electrons having a negative charge, when there's such a diversity of current conduction mechanisms available, using both negative and positive charge carriers. The pioneers of electrical theory and measurement chose one way, but they could have just as easily picked the other. Then I guess people would have objected to the centres of atoms being negative!

The diode has three junctions in it, metal-N, N-P, and P-metal. Different things happen at each junction, only the middle one is what we'd call a rectifying diode.

Use your favourite search engine to find out how doped semiconductors conduct electricity, and how metals do, and how the junctions work. There's much too much information in those topics for a simple answer here.

The schematic you've shown models at the 'conventional current' level, and is not concerned with what particular charge carriers are involved at various parts of the circuit.

Not the answer you're looking for? Browse other questions tagged circuit-analysis theory circuit-protection circuit-theory or ask your own question.

3
A little clarification regarding voltages, and “real” current movement
0
Current and voltage sources?
4
Why doesn't current flow through the common part of a circuit?
0
Two batteries connected to a resistor
0
Why is there current flow in the sub-circuits?
0
Does anything flow out of an op-amp?
0
Current flow stops at battery's positive terminal?
0
Flow of electrons
0
How do we know the direction to draw the arrows for voltage drops and current direction when drawing a circuit diagram for an ac circuit?