I am beginner in electronics and trying to understand some basics. One thing that confuses me is transistor configuration with common terminals. Since transistor has three terminals then we must use one terminal as common for both input and output actions.

But when looking at some of the circuit schemes for common collector I can't see clearly how collector is common for both input and output circuit? Take this scheme for example (taken from: allaboutcircuits.com): 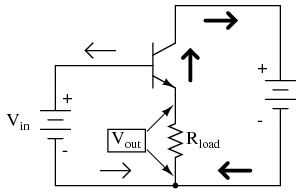 On the same page they explain it like this:

It is called the common-collector configuration because (ignoring the power supply battery) both the signal source and the load share the collector lead as a common connection point as in Figure below. 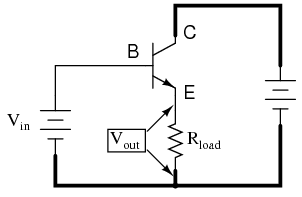 Common collector: Input is applied to base and collector. Output is from emitter-collector circuit.

But I still don't understand it. What I see from this scheme is that the input loop is (according to Kirchhoff loop law): V_in - V_BE - V_load = 0 and output loop is: V_cc - V_load - V_EC = 0. So the common for both loops is V_load that belongs to emitter terminal and not to collector's.

A BJT transistor has three terminals, namely Base(B), Emitter(E), and Collector(C). But we need actually four terminals to connect the transistor to the rest of the circuit. So we need two terminals for the input and two terminals for the output. In a common collector configuration, which is also known as emitter follower, the collector terminal is shared between the input and output signals, as shown in your schematic. If you AC ground the collector, i.e. short out the DC battery source, you would end up with the collector standing as the common terminal for both input and output signals.

The purpose of common collector is to buffer an AC input signal, not DC signal. Also note that a BJT is mostly used for amplification. So the name has something do with AC signals. A DC input signal, however, is just used for biasing the transistor. So it has no other purposes. Therefore, the name common collector comes after we AC ground all signals present in the circuit. If you AC ground the input signal, which is an AC signal, such as voice, plus a DC bias voltage, you would end up with the AC signal itself, the DC bias part would be shorted. The AC analysis of the battery like the DC bias voltage would be shorted. Therefore at the end you'll end up with the collector as the common terminal between the input and output signals.

Here's a schematic that might better show what's going on: 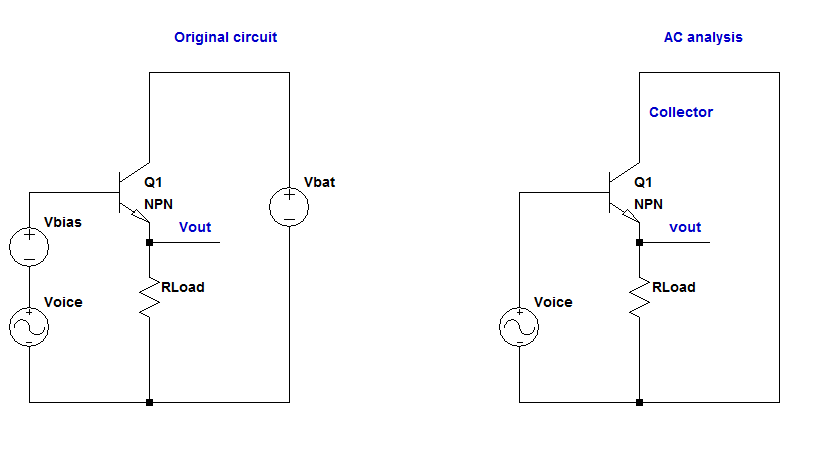 EDITED: I've found a reference with a precise explanation for the use of the word "common".

Page 98:
"As the 'name common collector" suggests, the transistor collector is connected straight to the supply line which, as far as the signals are concerned, is the same thing as the earth (common) rail, because power supply outputs are always designed to present a very low impedance to signals. The output load resistor, RL, is in the emitter circuit, whilst the input signal is fed in between base and earth in the usual way."

Furthermore, HOROWITZ and HILL(The Art of Electronics, 2nd Edition) don't even call this kind of circuit as "common collector". They call it just "emitter follower".

"It is called that because the output terminal is the emitter, which follows the input (the base), less one diode drop:

The output is a replica of the input, but 0.6 to 0.7 volt less positive. For this circuit, Vin must stay at +0.6V or more, or else the output will sit at ground. By returning the emitter resistor to a negative supply voltage, you can permit negative voltage swings as well. Note that there is no collector resistor in an emitter follower:

At first glance this circuit may appear useless, until you realize that the input impedance is much larger than the output impedance
(...)
In other words, an emitter follower has no current gain, even though it has no voltage gain. It has power gain. Voltage gain isn't everything!"

Both books (JONES, and also HOROWITZ & HILL) also refer to a "common base" circuit, and in those "common base" circuits we see the base of a BJT tied to one of the power-supply rails (positive or negative), the input signal is fed to the emitter, and the output is taken from the collector. This configuration is used at high frequencies.

My conclusion is that allaboutcircuits.com made a mistake when they said that "It is called the common-collector configuration because (ignoring the power supply battery) both the signal source and the load share the collector lead as a common connection point" , because the word "common" is exactly due to the power supply +vcc connection. The @Nasha's and @Dirac16's answers to this question also speaks about the connection to the power supply in order to define "common".

So, it seems that the word "common" is used because the so-called "common" terminal is connected to a fixed voltage (+Vcc or GND) with a very low impedance to signals, and not because it is shared by the input and output.

Take the expression "common collector" as (kind of) a naming convention, if you like.

From a closer look you can see whatever the collector voltage is, AC or DC, it doesn't intervene in the computation for the gain and output response — i.e. its potential doesn't vary since it's connected through a (theoretically) null impedance to a constant voltage source.

In a "common emitter" circuit, the emitter is connected to a constant and fixed voltage reference (i.e. ground) so that the emitter voltage doesn't intervene in computations. More accurately, not the emitter but ground voltage (i.e. 0V) does.

2
How is a common emitter different from an emitter follower?
0
Common Collector Amplifier and its name