For 3D CAD modeling, there is software called OpenSCAD which allows you to create 3D designs purely in code and then render them.

I'm wondering if something similar exists for PCB design where I could "write" a PCB, and then compile it to gerber files or similar which could then be sent to a fab site like easyEDA.

Edit: I should specify that by "in code", I mean in some language with support for things like named constants, functions, looping, etc. For example, in OpenSCAD, I can do things like

and so by changing constants, I can quickly alter the parameters of a model.

What I'm trying to do is create a pcb for a keyboard, but I'd like to be able to easily tweak the layout without having to shuffle each keyswitch around by hand. Adding or removing a row of keys, changing the staggering of the rows, etc. It seems like these sorts of things could be easy if the board was properly described in code rather than in a graphical editor.

Though EAGLE is a graphical editor, it can be controlled entirely via command line, which is the single input line above the drawing area. The commands can also be written to a script file, and though I haven't looked for it, it is for sure possible to start EAGLE from the operating system's command line and tell it to run the script and then do a CAM job to generate the Gerber files.

This is the layout of the well known simple astable multivibrator: 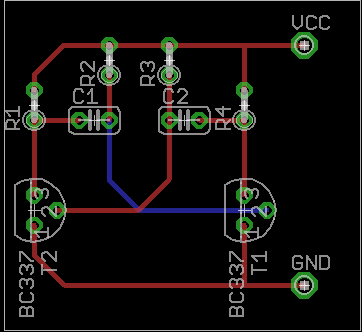 and this is a (cleaned-up) script which would draw it. (I've drawn it and exported it via the export-board.ulp from here):

One could simplify this, but yet, that's something for someone with way too much time...

8
PCB design software with ability to use PCB 'components'
4
Software to translate code description to PCB design?
1
Creating a slotted & plated through-hole in EAGLE: where to draw milling outline
0
Eagle Cad Resize PCB
0
Can you use a gerber file and a pcb printer to make a stencil?
18
Microcontroller works on breadboard, but not on PCB (which is proven to be correct)