What is the difference between Ethernet and Serial communication?

All the mouse movements, USB connections and other PC peripherals such as printers etc. are what is called serial communication. One bit per time.

So far so good. But when it comes to TCP protocol, Ethernet and internet it is not called serial communication anymore. But this is also bit per second stuff.

Why is that so? What is the main difference? I couldn't understand why it is not serial communication.

Ethernet can be transmitted serially and generally was until the days of 1000BASE-T.

But it's packetized, you literally can not send a single valid byte as there is a pile of addressing, crc, etc. overhead. Ethernet also does not insure ordering between packets, so you might send packets A B and C but the receiver could get them in the order C A B. There is also collision detection and re-transmission baked in.

Overall it's a whole lot more complicated that a serial connection.

The answer is: the ISO-OSI stack.

OSI stands for Open Systems Interconnection (ISO is the International Standardization Organization), and it's a model which defines the structure used to transmit data between every kind of devices. Each level is a different abstraction layer, and adds rules or details that define the communication protocol.

While Internet (excluding things that are commonly associated with it, like HTTP) belongs to the upper layers (the Network layer), serial communication is just a way to define the Physical layer. 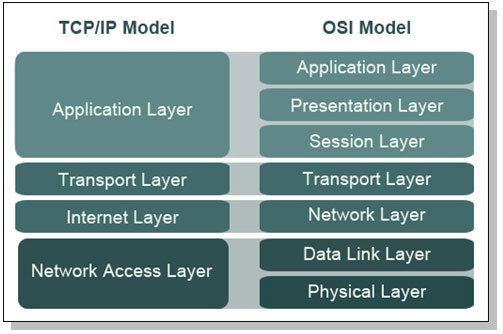 This is the OSI model stack, compared with the TCP/IP model used for Internet: you can see that Internet is defined at the network level, while the serial protocol (in strict sense, not the implementation) is defined by the physical layer, at the base of the stack.

From Wiki about the Internet protocol suite:

The Internet protocol suite is the set of communications protocols used for the Internet and similar networks, and generally the most popular protocol stack for wide area networks. It is commonly known as TCP/IP, because of its most important protocols: Transmission Control Protocol (TCP) and Internet Protocol (IP)

It has four abstraction layers, each with its own protocols. From lowest to highest, the layers are:

Ethernet and WiFi are examples of protocols that can work as Network Access Layer, providing the physical medium and the basic transmission rules (like the encoding of symbols) for the Internet connection.

Other protocols used at different layers of the stack are, as mentioned, TCP, UDP, HTTP and many others.

Several people have given you good answers to your question.

But there's another distinction nobody has mentioned yet.

When we talk about serial and parallel peripherals for a PC, historically we talked about a point-to-point link. One computer talks to one printer or one modem (per cable). In general there is a master device that controls all communications over these links and slave devices that just do what they're told.

When we talk about Ethernet, we're talking about networking. Multiple computers are connected a network, and none of them is necessarily master or slave. In the early Ethernet protocols, multiple computers would actually be hooked up to the same coaxial cable. Nowadays generally Ethernet means point-to-point links but Ethernet includes protocols that enable communicating with multiple other devices in a peer-to-peer network.

Of course USB somewhat changes the picture for PC peripherals because its a multi-point network, but its still a peripheral interconnect with defined masters and slaves, rather than a peer-to-peer network.

So, I'd say that discussions of serial and parallel interfaces don't mention networking don't mention TCP or Ethernet because those things live in a completely different world from peripheral interconnects. Like when you talk about all the kinds of apples (Red Delicious, Braeburn, etc.) you never mention Gros Michel and Cavendish.

In my work as a control system engineer for power plant design, we have hardwired IO (input/output) point lists and a separate "serial" points list. My preference is to call these "soft" point lists a "communicated point list" instead since they are typically Ethernet based (Modbus TCP, DNP3, Profinet etc.). Many colleagues still insist on using the historical "serial point list" title. I'm interested in hearing from others on the proper nomenclature for such lists.

One byte at a time is also called serial communication, except by hardware people. Nobody cares how the signaling is done. Think about a modem. Although the RS-323 interface driven by a UART chip may be banging out the bits one at a time, the actual encoding done by the modem may use parallel encodings whereby multiple bits are transmitted at the same time.

Ethernet also used to be strictly serial (baseband pulses at a rate of 10 Mhz). Modern Ethernet protocols are not serial.

The word "serialize" is often used to mean "pack some data in memory into a byte-by-byte format" (where issues of bit order and such are taken care of way down in some datalink and physical communication layers).

Not the answer you're looking for? Browse other questions tagged serial ethernet protocol network-interface or ask your own question.