I have been trying to implement an open drain Serial output using a Arduino Nano. In the following example I have used 2 Arduino Nanos (both operating at 5V Vcc), using one Arduino as the transmitter and the other as the reciever.

The Transmitter is programmed to send the following series of bytes:

The receiver is obviously expected to receive the same. But instead this is what the receiver seems to be receiving:

The following is the circuit I am using to interface between the two Arduinos:

I apologize if the terminology I have used here isn't totally accurate, since I am only a beginner in the field. Am I missing something in the circuit? Is the N-Channel MOSFET I'm using here appropriate for this application? Any insight would be greatly appreciated, thanks in advance.

This is messed up a number of ways:

First of all: Why do you want to use the MOSFET there?

And what use shall R1 have?

Using one single MOSFET will invert the output of the IC so when the IC outputs high level on the Tx pin you'll get low level on the Rx pin and vice versa!

I was just checking the waveform of fe fe 68 and the waveform of 00 00 09. Assuming some timing parameters (time between two bytes) one of the two waveforms is exactly the inverse of the other waveform.

So when the Tx pin is high when sending fe fe 68 it will be low when sending 00 00 09 and when it is low for the first sequence it is high for the second sequence.

So this is the reason why you don't receive what you expect: The MOSFET acts as a NOT gate.

Note: I am assuming that your goal in the open-drain quest is to eventually have a plurality of Arduino transmitter nodes connected to a single receiver.

The usual serial class of the Arduino uses the hardware UART and idles high (and, of course, is a push-pull output). The expectation of the chip designer is that you will use an inverting RS232 driver and an inverting RS232 receiver.

So if you want to make an 'or' allowing two transmitters and one receiver you can either invert twice using a pair of PNP BJTs or p-channel MOSFETs at the transmitter (with a pull-down resistor), and an inverter at the receiver, or you can use diodes like the dual shown below, with a pull-up resistor: 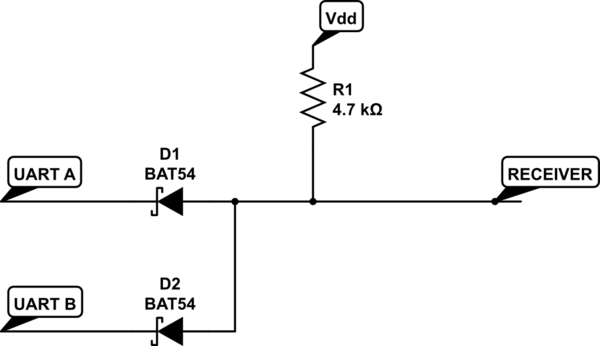 Keep in mind that RS232 drivers and receivers were designed with levels, impedances and protection for robust operation with long-ish cables and if you attempt that sort of thing with CMOS inputs/outputs you will open yourself up to all kinds of issues.

The preferred solution in this case, in my opinion, would be to use RS485 drivers and receivers with a properly terminated twisted pair (plus a common ground) and enable only the transmitter that is active. You would use an extra GPIO to enable the active transmitter.

Anyway, this would be the way to do it as you were thinking: 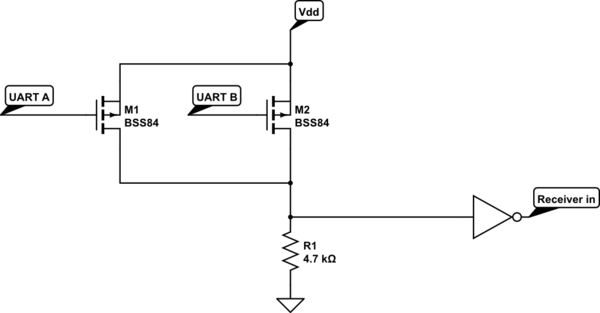 Finally, you might be able to modify the SoftwareSerial class to diddle the DDR bit rather than the output and simulate open drain using the AtMega output directly (requiring only a resistor and no transistors), however that's more work and has other disadvantages (such as lack of speed) over using the provided hardware on the chip.

Not the answer you're looking for? Browse other questions tagged arduino mosfet serial open-collector open-drain or ask your own question.

4
Problem with RF transmitter/reciever and VirtualWire
1
Wiring an IR phototransistor
1
Interrupts and Arduino EthernetShield
0
Custom PCB for USB to Serial output?
1
Arduino 433MHz transmission fails if falling edge is less than 122ms
3
Thermocouple temperatures change drastically when my whole system is powered vs when just my arduino is powered
0
Raspberry Pi 2 to arduino RF Serial link with USB to Serial TTL Converter
0
What do I need in order to make my arduino to transmit / recieve signals exactly at 433.68 MHZ?
1
PIC32MX UART Interrupt Not working