Is this noise in current amplifier feedback because of my PCB design?

I am trying to design a 24V, 4A BLDC motor driver. Here is the PCB I have designed for it.

Discussion on this topic could be found here. In summary, open-loop works, but closed-loop is all over the place.

Here is my current feedback readings and below is the one for the reference board. These readings are transferred to my computer over UART with the help of Kinetis Motor Suite GUI. So, these are the readings of the ADC of the microcontroller which measures the output of the current sense resistor amplifier. More specifically CUR_A, CUR_B etc.. 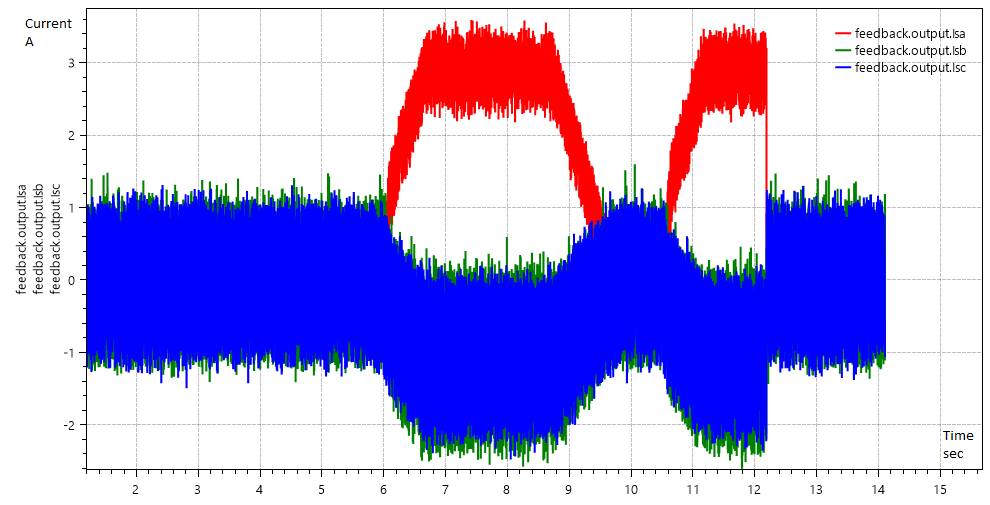 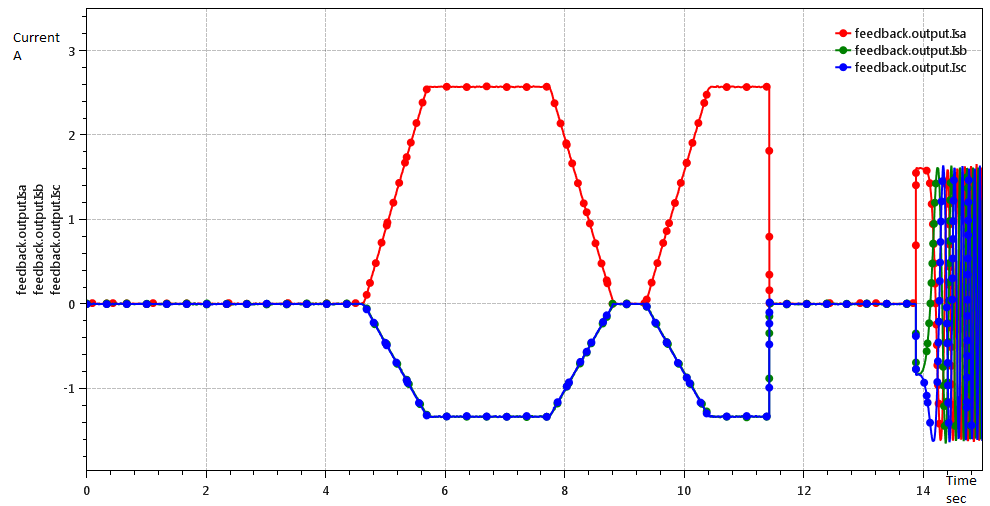 With no activity on gates, here is the voltage across R52, which is the Phase C current sense resistor. Scope is AC coupled and BW is limited to 20 MHz in this measurement. Scope probe ground lead has about 1 cm length: 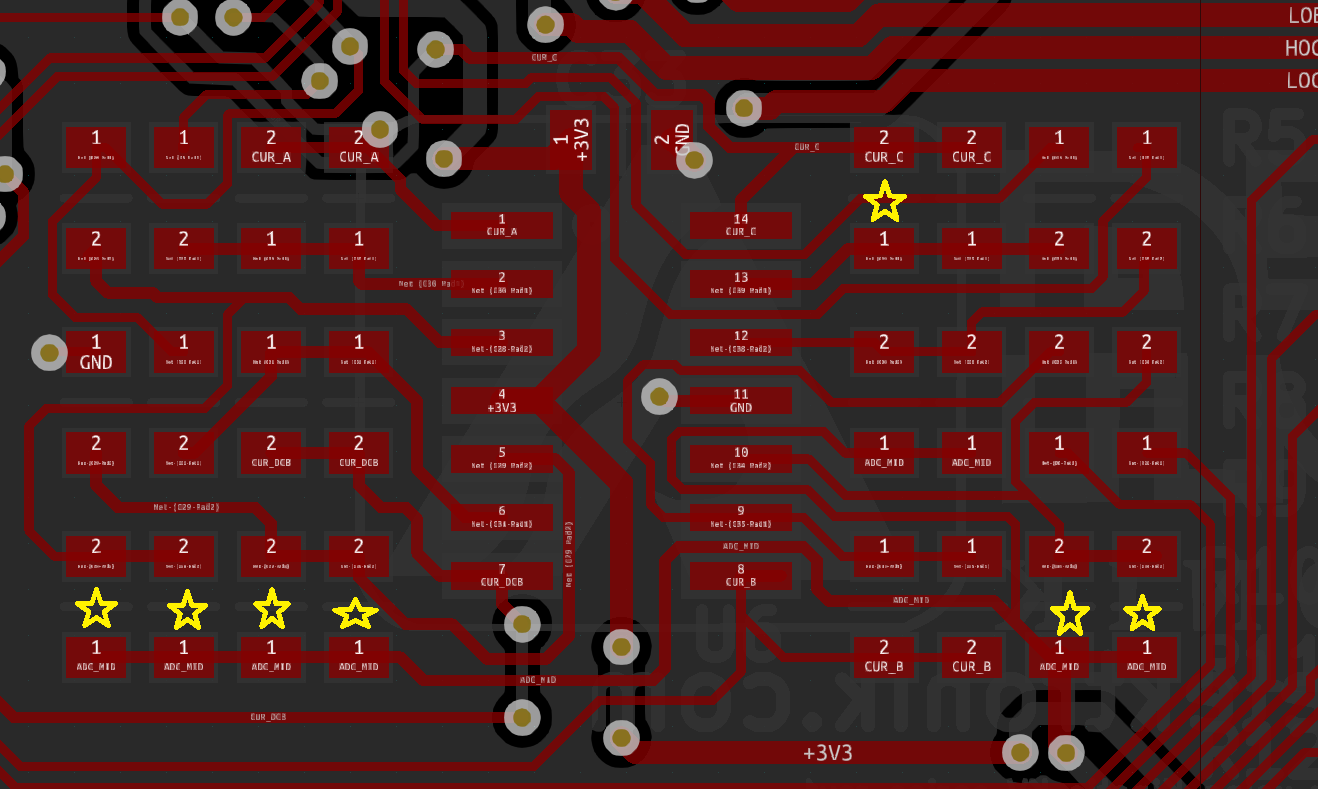 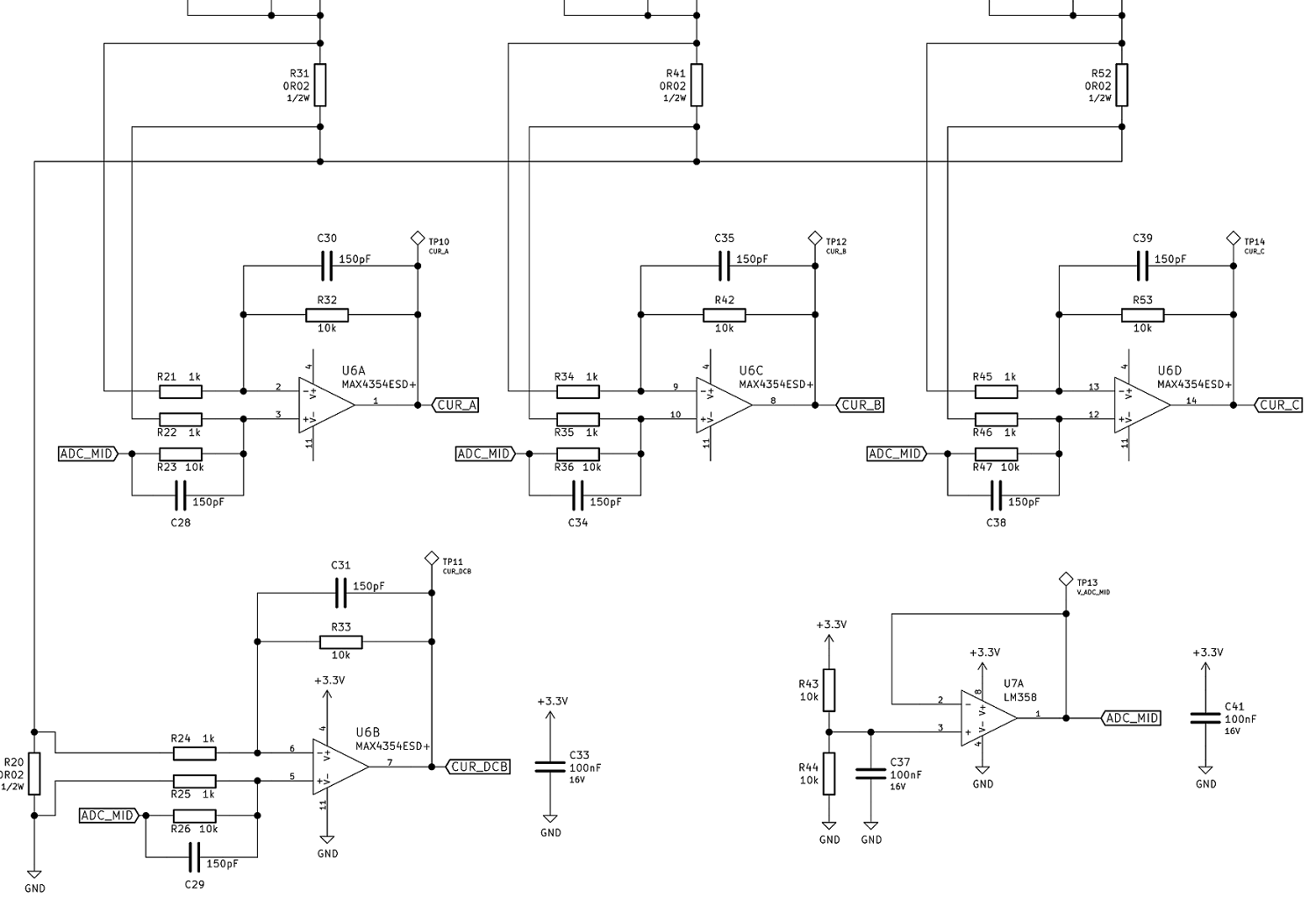 I have removed the feedback capacitor C39, which did not have much help with the oscillation, then, when the starred components are not populated, which are C28, R23, C29, R26, C34 and R36 from left to right, the above oscillation problem is solved. Not populating these components effectively prevents ADC_MID line from going to other OP-AMPs in the package. Why would this cause a problem?

I am suspicious that my PCB design is problematic. Here are my schematics, layer drawings and gerbers. Could you notice a problem that would cause this? 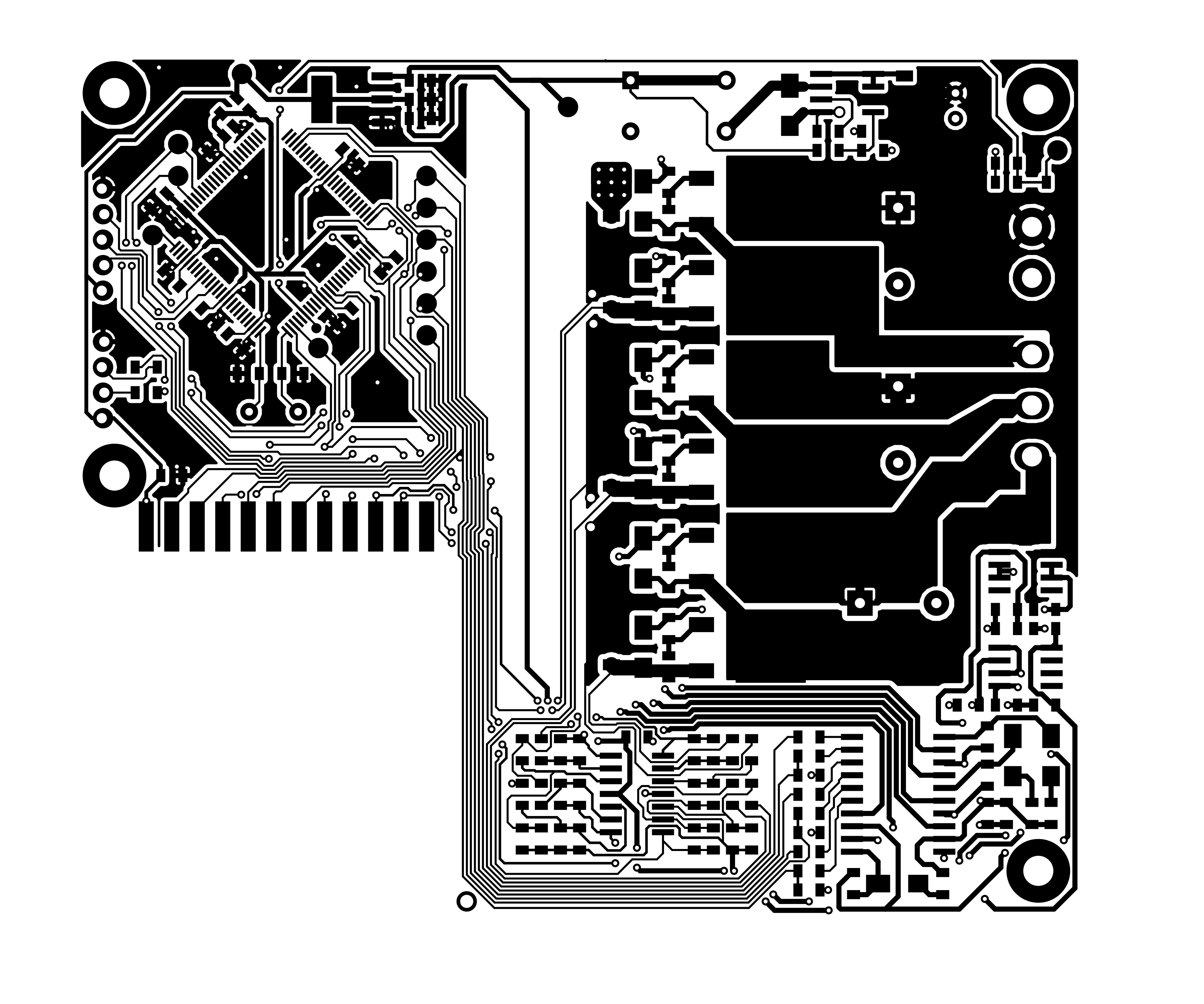 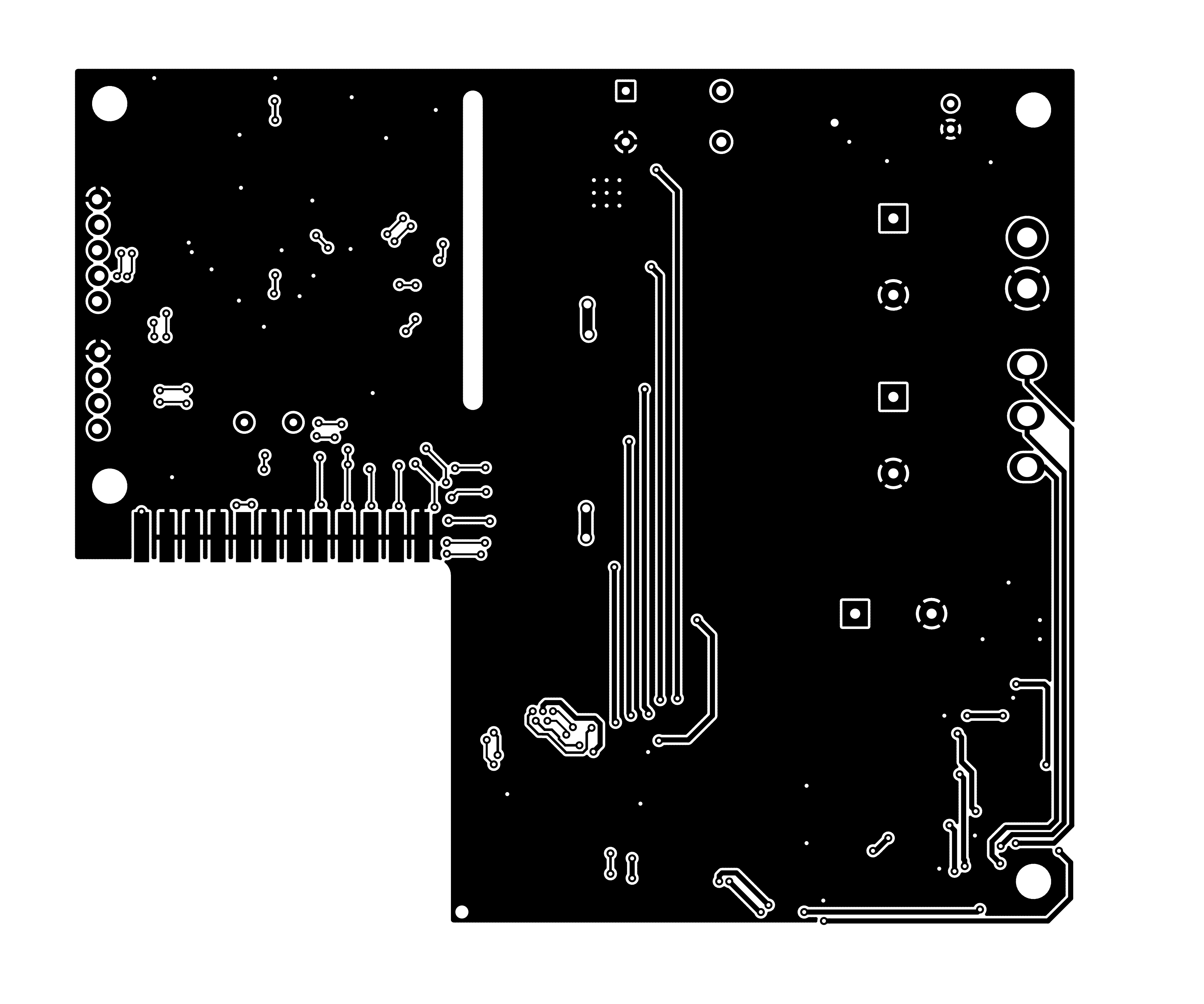 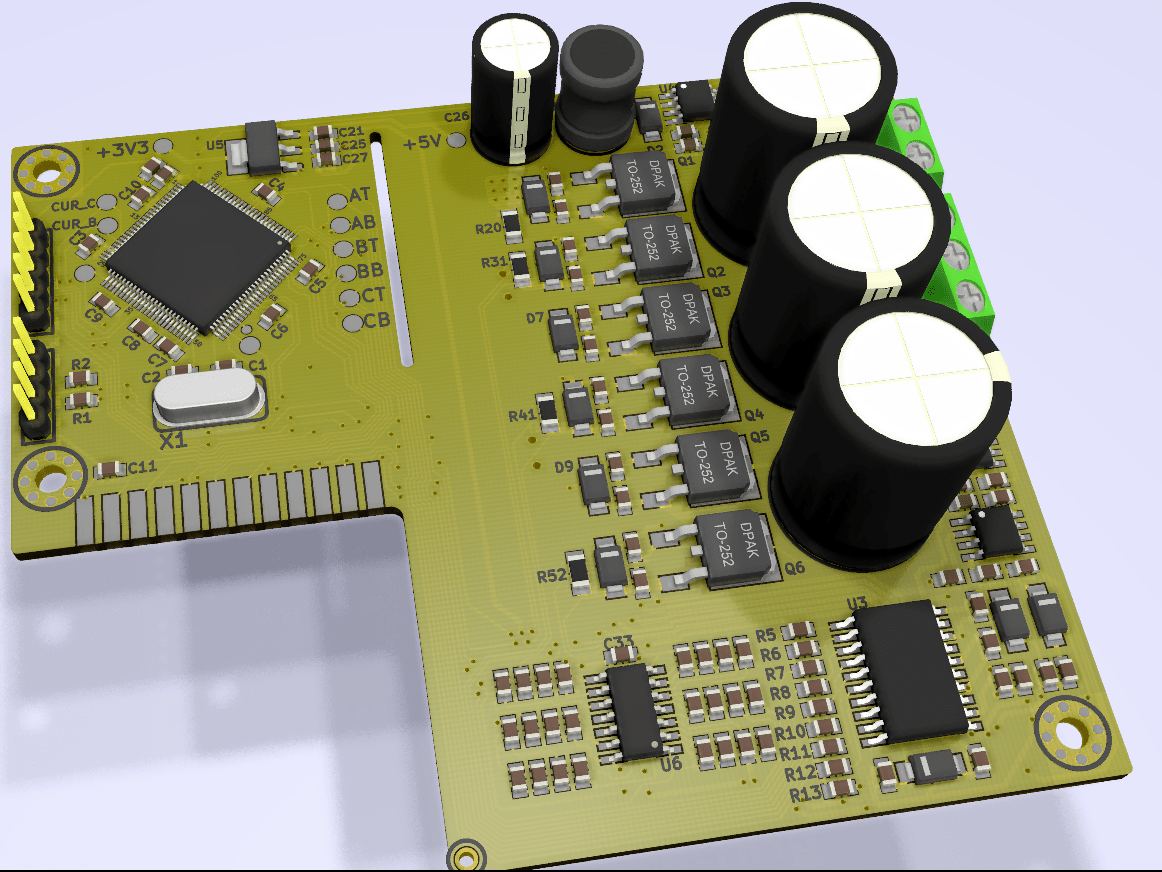 Congratulations on your well written question loaded with information.

The answer to your question is in the opamp's datasheet:

Your schematic sets the MAX4354 opamp for unity gain at HF via the feedback capacitors (C31 and the rest). Therefore it will oscillate, this is inevitable.

The fix is to remove all the 150pF caps.

Now, the amplifier will still be unstable, as explained in datasheet page 11 "Choosing resistor values". You really don't want a 10k feedback resistor on such a fast opamp, this will create a pole with the input capacitance, let's say 3pF or so including trace capacitance. This adds phase lag into the feedback, which will eat into the phase margin and either make it oscillate or screw up transient response and settling time, which I presume are important to you since you chose this fast opamp for a reason!

Considering the motor currents involved, you're not saving milliamps on the opamps' power supply, so you need lower feedback resistors. Try 1k/100R instead of 10k/1k.

Problem is, all the extra traces and pads for your unnecessary capacitors do add parasitic capacitance, so put the feedback resistors in whatever SMD footprint is closer to the IC (which will probably be the caps) and cut the traces to the unused footprint.

If it still gives you trouble, don't do another board revision yet. Just solder the feedback resistors across the MAX4354 pins, and cut more unnecessary traces to reduce capacitance. With 0402 resistors this should work just fine. If this gets your opamp rock stable, then you know your next board revision should have the resistors R33 and R24 (and their equivalents for the other opamps) as close to the pins as possible with minimum length traces.

But it will still suck on transient response, maybe ring, because the opamps are driving capacitive loads, which are the long traces to the microcontroller. I would add 15R to 33R resistors at the opamp outputs.

You could even use lower feedback resistor values, although the LM358 might start to bitch a little.

LM358 is a old piece of crap with crummy slow transient response. Your fast MAX4354 is drawing steep current pulses from its output. Output impedance of LM358 at high frequencies is "mmeeeehhhh" because it has 1MHz bandwidth.

Therefore ADC_MID is likely to move around. The fix is to have a look at the internal schematics of LM358 (datasheet page 13), notice how the compensation is wired, and stick a resistor between the output and ground (like 470R) to bias the output stage into class-A, which will lower its output impedance and make it faster.

If this is not enough and you notice transient variations on ADC_MID,
stick a big fat low-ESR cap right across the output of LM358, like 470µF 6.3V Panasonic FR which costs 9c and has 80 mOhms ESR. Or even a polymer cap. Opamps driving capacitive loads will be stable if the cap is large enough.

FYI by following these rules I did a board with 4 switchers, 1 micro, 1 H-bridge, everything switching all over the place, and I got less than one ADC LSB noise on the current sense resistor.

I can now see the full schematic, and you say the oscillations go away when disconnecting ADC_MID from the other three current sense opamps. A few new observations:

100 nF was chosen for bypass caps in the Pleistocene not because the value was optimal, but because that was the largest cheap and small ceramic capacitor you could get.

In general I note that there are inadequate bypass caps throughout the design. A motor controller has high di/dt so extra care must be taken. A good practice is a ceramic in parallel with a tantalum. And place them liberally through the board.

I also note that you do not show the other half of the LM358 op amp. Make sure this is properly bypassed to prevent oscillations. This could be a source of your problems.

Another likely source of your noise is the switching regulator. Simply tacking an electrolytic on the output will not adequately suppress the harmonics. I recommend disabling the switcher and power the circuit with a linear bench supply to test this theory. If it proves out, you will want to revisit the position of the supply on the board and improve your output filtering of the supply. Also do not overlook the fact that the switcher can place noise on the 24V bus.

The quad op amp appears to be powered by a single supply and you are attempting to pick up current signatures that are near ground level. This is typically problematic even with an input offset circuit like yours. You should consider a differential supply with an appropriate op amp.

I believe the issue you are facing is a schematic level one. When you capactively load an opamp you end forming a pole with the intrinsic output impedance of the opamp.

For a buffered reference I suggest you mod wire the following, 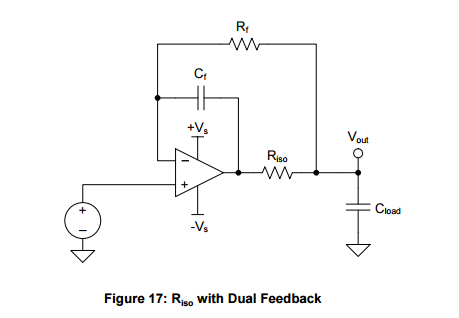