Does this voltage regulator use "on-off" control, or is it a voltage follower?

In Electronics A2 (GCE), we are currently studying voltage regulators.

An example voltage regulator circuit is provided using an op-amp and a power MOSFET. 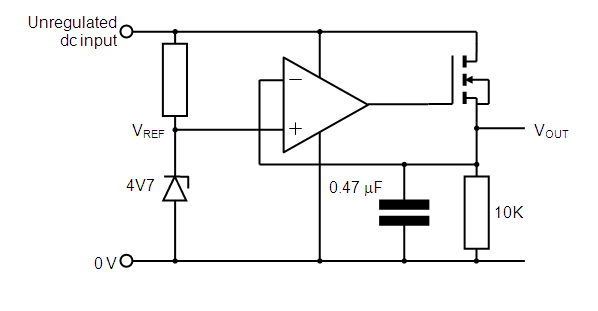 I would judge this to be a voltage follower.

The workbook however claims it uses on-off control. In other words, if the output voltage is below the reference, the MOSFET is turned hard-on; otherwise, it is turned off. Since the cap takes time to charge, this causes the circuit to regulate at a voltage.

However, I would have thought that due to the lack of inertia in the circuit (at most the on-resistance of the power MOSFET, around 0.02 ohms) would cause it to constantly overshoot if it did this; instead, it simply regulated normally.

When the gate waveform was checked, it was steady, which further convinces me that it is essentially a power follower for the op-amp.

The teacher claimed that it was probably switching on and off too fast to see at the gate using "only" a 50MHz scope. The time constant to charge the 4.7uF cap (changed from diagram) through the 0.02 ohm RdsON would be on the order of nanoseconds, so this could be true, but I can't see how a general purpose TL071 op amp could possibly do this, especially without a gate driver and high speed PCB layout.

Interestingly, the original circuit used 470nF which worked up to around 40mA load; the cap had to be increased to 4.7uF to maintain a stable output up to 250mA (otherwise, it did appear to exhibit a form of oscillation, around 500mVp-p noise at a few kHz.)

I could see this being on/off control (a switcher) if there was a inductor in series with the FET. However since there isn't, this won't work as a switcher.

This topology looks like it is intended for linear operation. However, the capacitor slows down the system response so that the controller could easily oscillate under some conditions. This is not a good idea in this case. The way to fix it is to slow down the controller. This can be done by "compensating" the opamp if it has such control. If not, the right size cap between the opamp output and its - input will slow it down. For that to work, there will have to be a resistor between Vout and the - input. You can start with a 1 kΩ to 10 kΩ resistor and then use the capacitor value that is just a little above the minimum where the system doesn't oscillate at all operating points you care about.

There are more sophisticated ways to control power supplies, but what I described above is a quick fix that only adds two parts to the existing topology. The tradeoff is that is will slow the transient response. If you care about performance, then you need to start from the beginning and design a power supply the right way.

The circuit will be stable as a linear circuit OR act as a PWM switcher - whichever you don't want it to be on any given day. Murphy loves this circuit. I build ad-hoc circuits similar to this on occasion for specific test purposes and if this circuit oscillated I'd not be surprised.

There is no formal positive feedback to provide hysteresis and make it switch reliably so you may expect it to sit down stably as a linear regulator - but you would normally be disappointed. When it is at the linear operating point a small amount of noise on either opamp input will tend to flip it rail to rail and lead to oscillation and noise. Putting a capacitor on the inverting input means that impulse noise which appears on the zener, even though attenuated severely by zener action, is possibly enough to drive the opamp well away from the linear operating point.But, it's also possible for it to be stable.

The TL071 dataheet here is somewhat capable compared to some alternatives. The 16 V/uS slew rate and 4 Mhz gain-bandwidth product is 'useful'. The gain is 200,000 typical and about 50,000 minimum. 10 uV of noise on the zener will swing the opamp out put by 50,000 x 10 uV = 0.5 Volt swing on the FET gate in around 1 us range and the capacitor slugged inverting input has its hands tied behind its back, as it were.

This sort of circuit will be snappy (and potentially oscillatory) because there isn't any feedback compensation. When the sense input goes below the zener reference voltage, the open-loop gain of the opamp will sharply swing the output high. When the sense input goes goes above the zener reference voltage, the opamp will swing sharply to zero.

So, this is on-off control - only because (as Olin said) it's an extremely poorly implemented regulator.

The fact that you managed to observe a steady waveform isn't a coincidence - even uncompensated circuits often find their way to equilibrium under specific circumstances (for you, it's likely a fixed input and a fixed output load).

The fact that you saw oscillation tells you that the circuit needs compensation.

To achieve compensation, there needs to be a resistor and capacitor in series between the opamp output and the noninverting input. This turns the open-loop opamp into an integrator, which will control the MOSFET gradually (in the linear operating region) to bring the error as close to zero as possible.

This circuit is an op-amp version of the "classic" circuit which uses a zener diode and two bipolar junction transistors. One transistor receives a feedback voltage and amplifies the zener diode's reference voltage, controlling the other, the "pass transistor" in a feedback loop.

Here, the role of "pass transistor" is played by a mosfet and that of the other transistor by an op-amp.

One small problem with this circuit is that the feedback voltage is exactly the output voltage. The voltage from the top of the 10K resistor is fed directly to the (-) input, which compares it to the Zener voltage. This is only useful if you want the output voltage to mirror the Zener voltage. You don't want to simply choose a bigger Zener to get a greater voltage. Here is why. For these circuits, the Zener diodes are chosen in the 5-6 volt range because of the temperature stability of Zeners in that voltage range. Smaller or larger Zeners will show temperature drift. The idea is to take a temperature stable reference voltage and then scale it to the voltage you actually want. Thus you usually want to take the feedback via a voltage divider. It's easy to add a potentiometer to make it adjustable. For instance, if you replace the 10K by two 5K in series and take the feedback from the midpoint, you are scaling the reference voltage by two. The circuit tries to make the midpoint match the zener voltage, and so the top of the divider is double that.

The more serious problem is that this circuit has no overcurrent protection. In spite of using an op-amp which contains some dozen transistors, it fails to provide the fold-back current limiting that a three-transistor circuit can provide.

Not the answer you're looking for? Browse other questions tagged operational-amplifier voltage-regulator stability control-loop or ask your own question.

2
Did Capacitative Loading Kill My Op Amp?
2
Op amp voltage reference with emitter follower
2
MOSFET voltage follower for non-inverting op-amp biasing
0
How can I keep this MOSFET in cut-off when Vcc > 5.5V?
1
Why mosfet doesn't turn off when battery voltage is low?
0
Do i need to use capacitors with a 5v voltage regulator?
1
Voltage regulator does not start if driven by mosfet
0
op amp rail to rail voltage follower latching up
1
Beginner nodal analysis exercise: Why would the voltage of the output of the op amp swing from 15V and 0V when op amp is in the follower configuration