I am having confusion for this stability question of induction motor. The real question is here 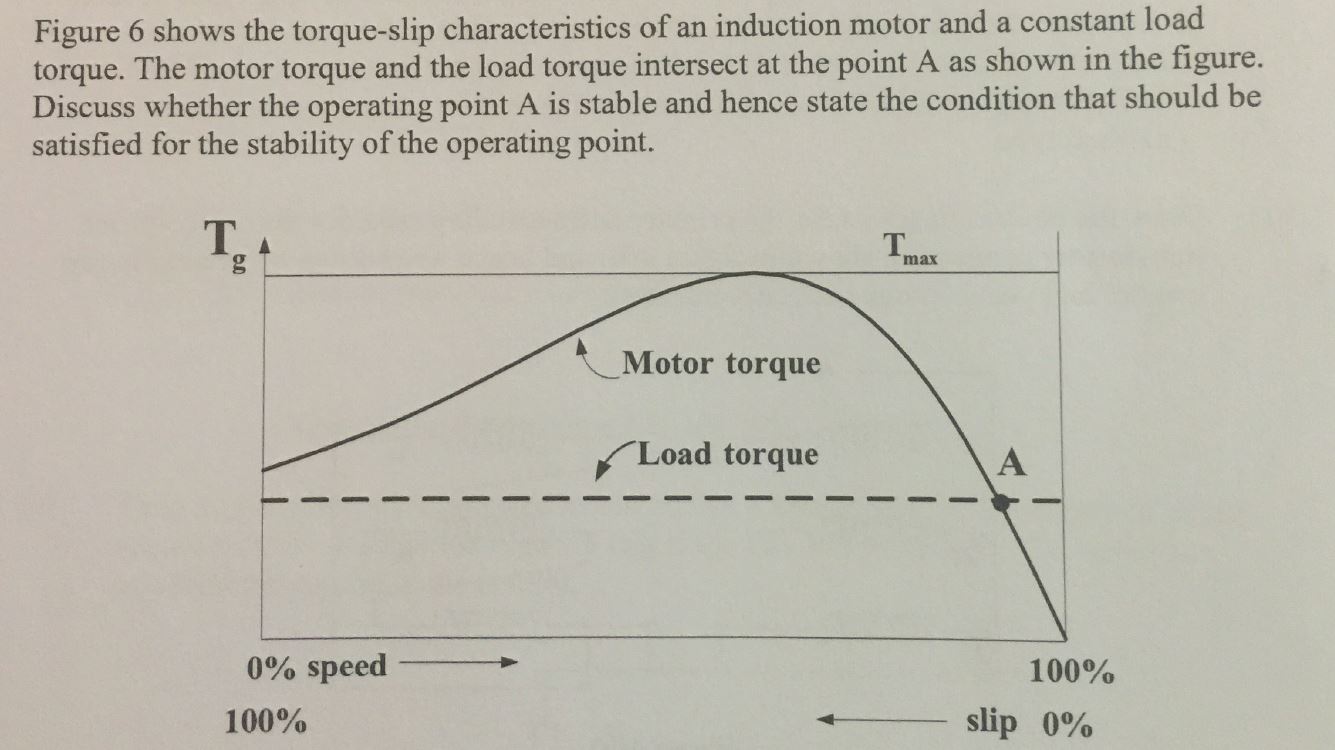 I searched and searched online, keep reading and reading, but still not enough to answer my doubt.

My understanding (that I learnt from here http://electricalbaba.com/understanding-induction-motor-stability/#comment-2645 ) on why point A is stable is like this: "If I increase the load torque, as the load torque increases, the new operating point has higher slip compared with that of point A which in turn means that speed of Induction Motor has decreased, and hence operating point A is stable".

Is this reasoning correct? But how about the condition that should be satisfied for the stability of the operating point A?

Hope some people can kindly help me. Thank you!

At the operating speed indicated by the point marked, the torque capability of the motor is equal to the torque required to turn the load. Thus the motor has no tendency to provide the additional torque that would be necessary to accelerate the load. Also there is no tendency for the load torque to overcome the torque provided by the motor and decelerate.

Any difference between the torque required to turn the motor at a given speed and the torque capability of the motor at that speed is applied to the inertia of the load as accelerating or decelerating torque. Any change to in the load or motor characteristic curve will move the operating point to the new intersection of the two curves.

Here is an illustration: 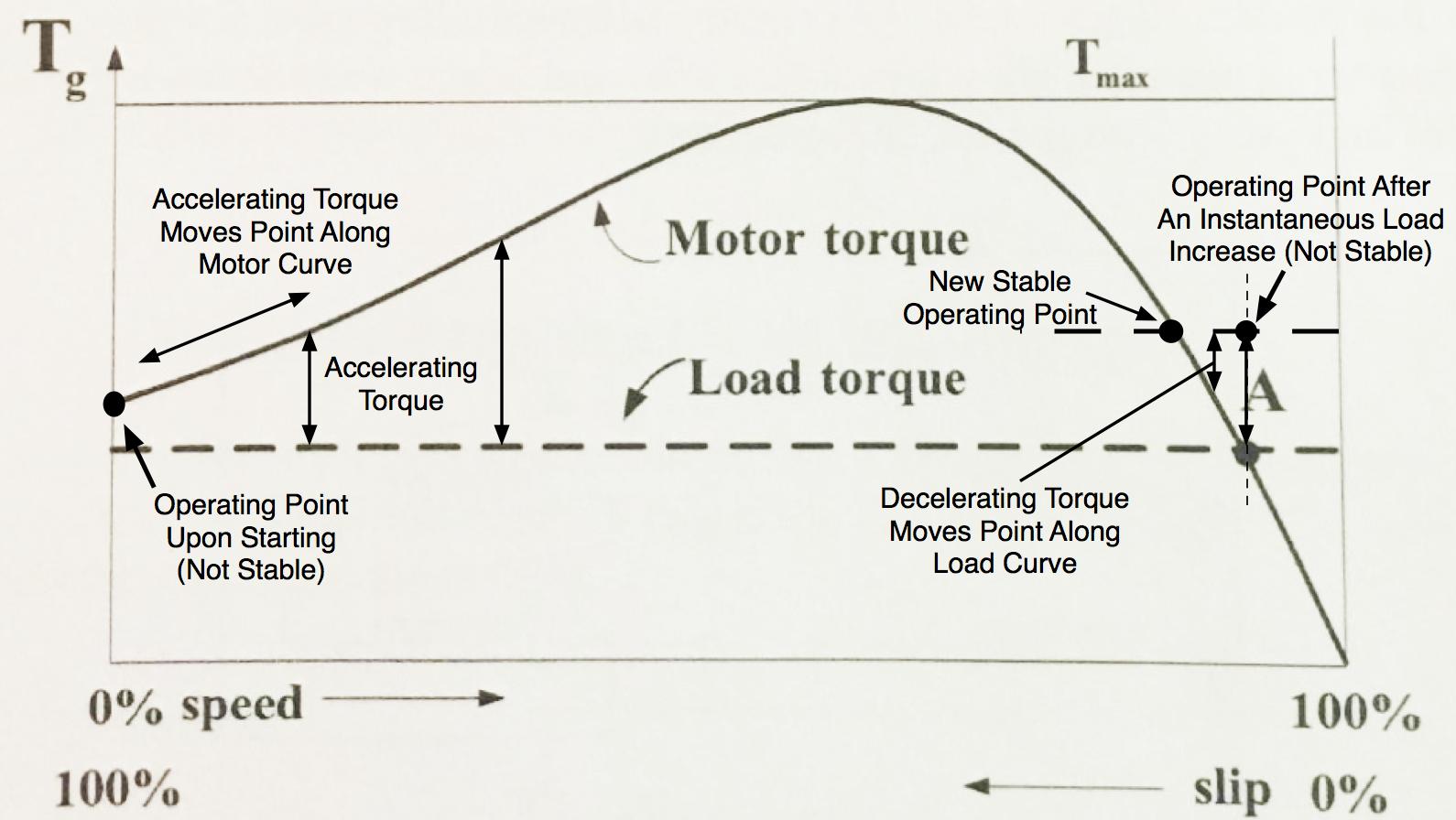 Note also that the motor curve can be expected to change. Normal (or abnormal) increases and decreases in the supply voltage will increase cause the available torque to increase and decrease. Motor warmup upon starting and ambient temperature changes also have a small effect on the motor's torque curve. That means that operation at the peak of the motor curve is not a stable operating point because the slightest decrease in motor torque or increase in load torque can cause the motor to stall. Of course operating continuously at that point is normally a severe overload condition.

The essential condition that defines a stable operating point is that it is the point where the torque requirement curve crosses the motor capability curve in a region where the motor torque capability is declining as speed increases. There are conditions that are more complicated than the diagram shows, but they are beyond the scope of the question. As the situation is presented, when the motor is switched on, it simply accelerates to the stable operating point. At all speeds lower than that point, the motor curve is above the load curve and accelerating torque is applied. At all speeds above that point, the motor curve is below the load curve and the deficit in motor torque allows the load torque to decelerate the load.

This is true for all motor-load combinations, not only those which operate on slip as an AC asynchronous motor does.

However, if the higher load torque were applied once the motor was up and running then the system would be stable because it could back-down (a bit) on the graph without going past the point of no return (maximum torque).

We know from linear and rotational acceleration that F=ma. Thus a constant speed is achieved (stable) when the forces are equal at a point on the load line.

Where it is unstable is below the Tmax. This is a boundary conditions where Tload < Tmax and where equal determines RPM with no acceleration force and constant velocity. The other is starting up if the load is between Tmin and Tmax, it wont start up, so startup caps and coils are used to boost the motor current until a speed where the transfer switch has about the same torque as Tmax

Otherwise the motor would never start up and the load torque must be less than the starting torque to start up.

Now the slip effects cause this low torque at 0 RPM and this loss of torque declines with rising speed ( ie torque rises) such that when it generates BEMF which ends up limiting the voltage drop internally and thus current drops with available torque.

Past this peak, Tmax Torque is now dominated by BEMF as the slip effects are now minimal but depends on the magnetic design. 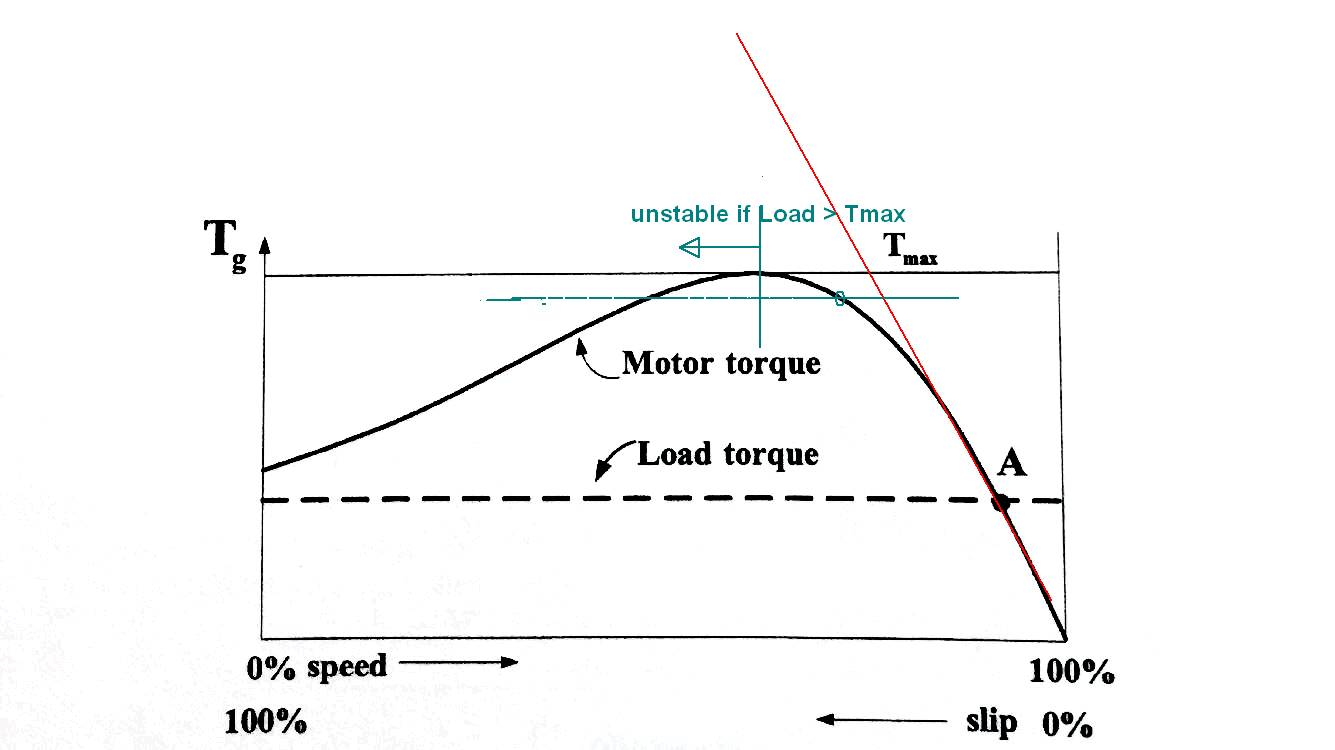 Just like a voltage regulator with resistance. Voltage drops with more load current V=Voc-IR or like a spring in the linear stable part of the curve that deflects down x with force in the same direction, F for x=F/k for some spring constant, k.

Thus we see there two factors that reduce torque in AC induction motors.

1) Slip frequency which demands a boost circuit for startup and

2) back EMF , which generates a voltage opposite to the applied voltage and for Induction Motors it becomes 0 torque at some integer ratio of the line frequency and number of poles.

This optimal peak ratio of RPM / max RPM depends on the motor design and there are standard torque curves that differ from your example.

The maximum power is at a higher RPM than Tmax since Power = speed * Torque when using MKS units.

Not the answer you're looking for? Browse other questions tagged induction-motor stability induction or ask your own question.

3
Why is there a pull-up torque during the starting of an induction asynchronous motor
0
induction motor stability
0
Induction motor: T-Slip Characteristics look weird