I am trying to make a fault analysis of a bunch of ceramic capacitors.

Short description of the application:

10 220 µF ceramic capacitors 1210 package are placed in parallel with a 3.6 V battery. A MCU wakes up periodically (maximum once per minute) and draws current (maximum peak 10-15 mA for a few milliseconds). Total time before going back to extremely low power sleep is 130 ms. The capacitors are supposed to hold enough energy to cover this without dropping below 1.6 V (minimum supply voltage for the MCU).

This is needed since the operating temperature is low, and the battery cannot deliver. The battery has enough time to recharge the capacitors while the MCU sleeps.

I am suspecting shorts in the capacitors. Because:

To see this for myself I have attempted making cross sections, but I have a hard time understanding what I am seeing.

How I made the cross section:

I repeated this on two PCBs.

There are 3 capacitors next to each other: 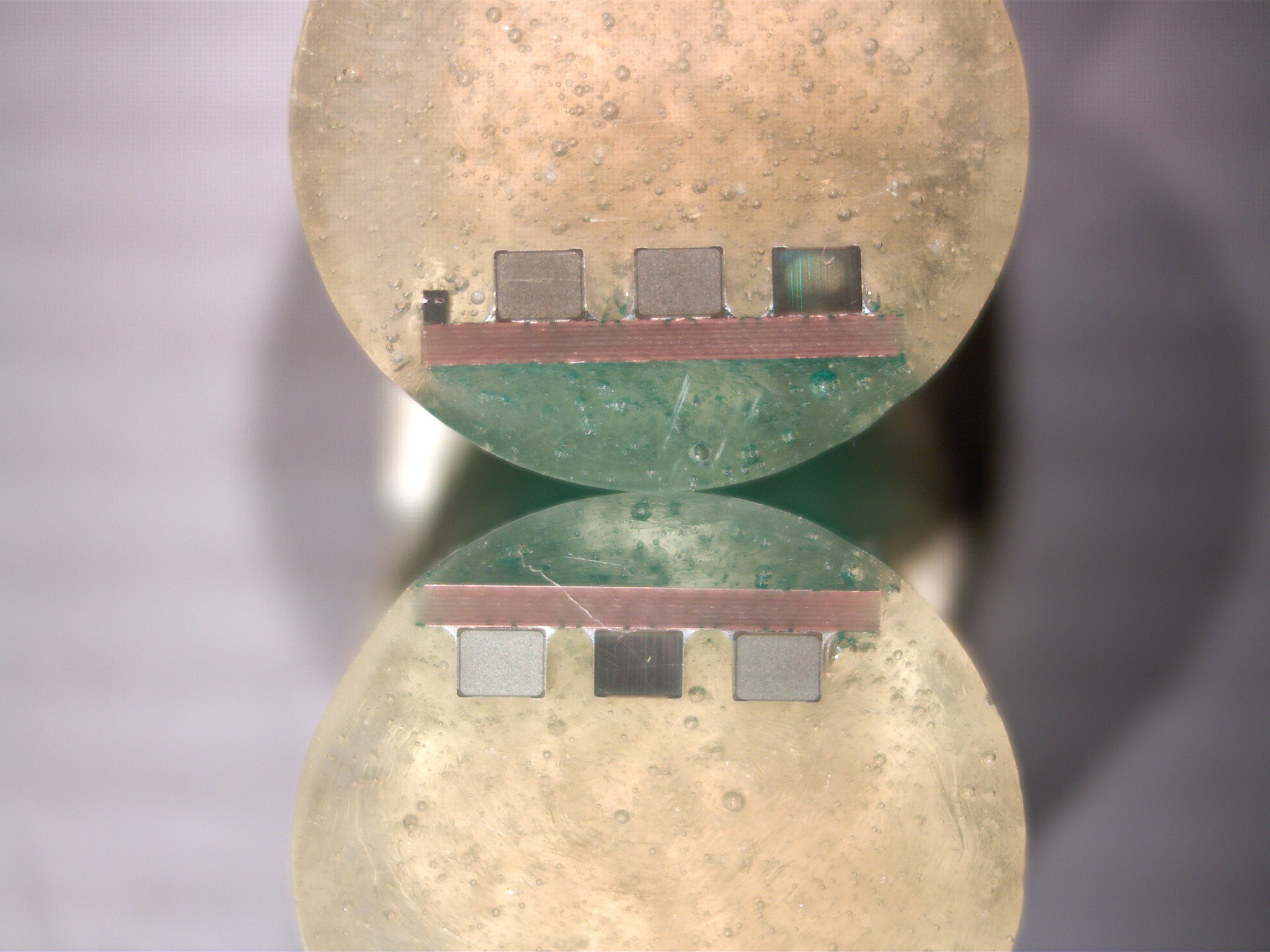 Here you can see a color difference between the capacitors, top right and bottom middle are darker in color. But as you can see, not in the same position.

I don't have enough rep to add all images. I will comment links to all the images. Would appreciate if someone could edit and add the images to the post.

The darker colored ones (top right, bottom middle) look like this close up. 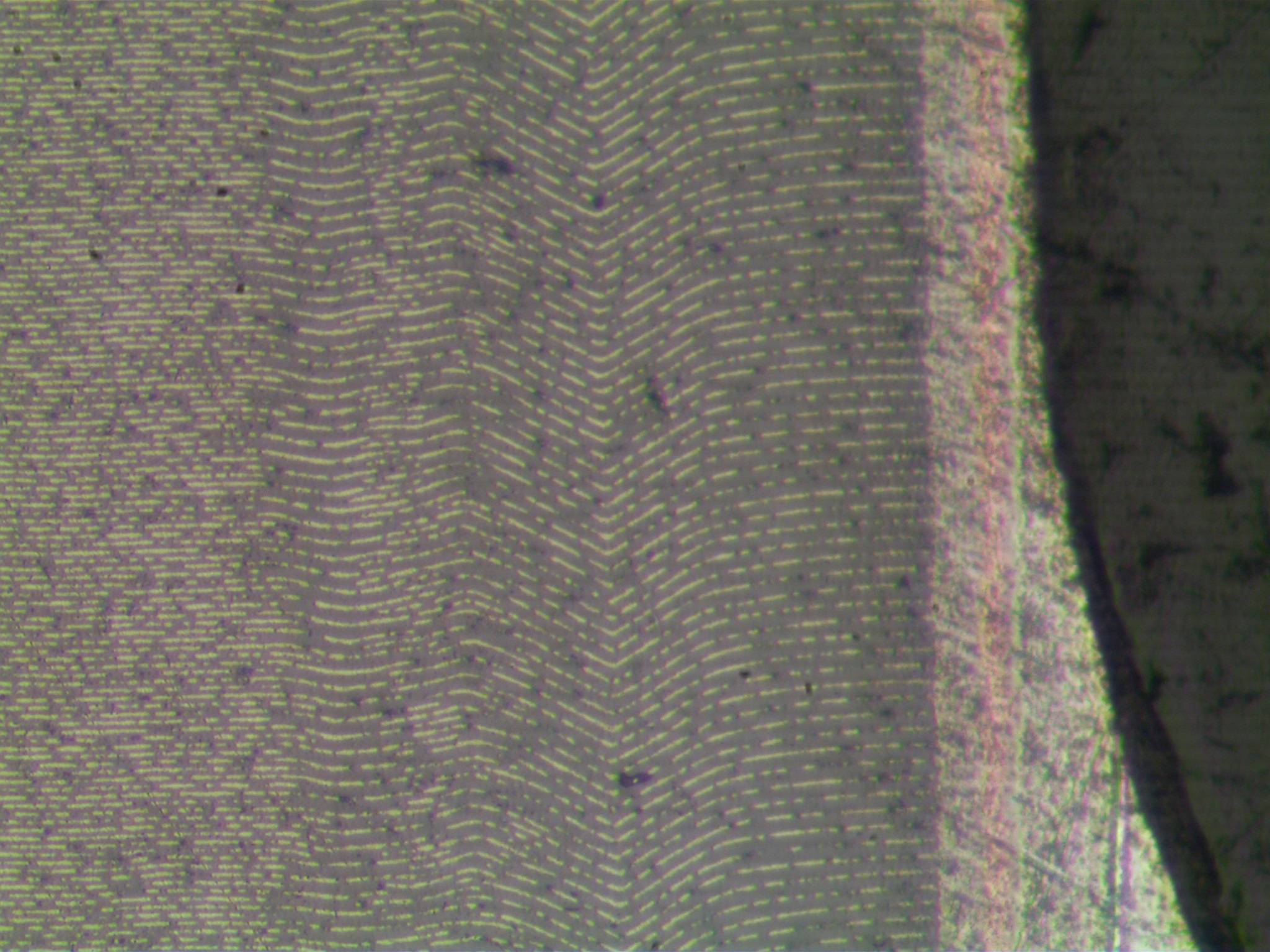 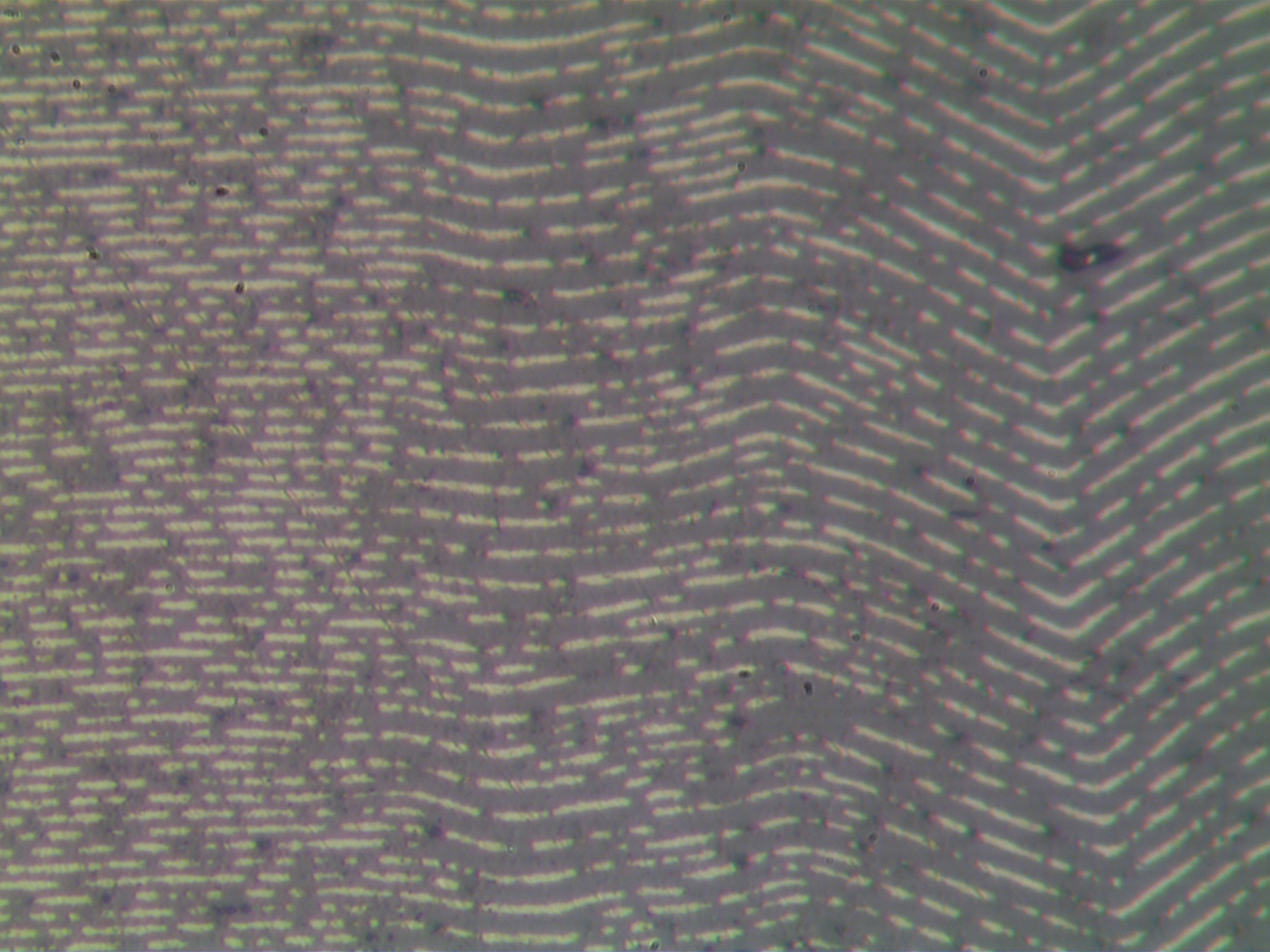 Almost what I was expecting a ceramic capacitor to look like. At least you can see some kind of layering. But the layers are not solid as I expected. Can this be damage caused by the grinding and polishing?

The distance between the layers is 2 µm. 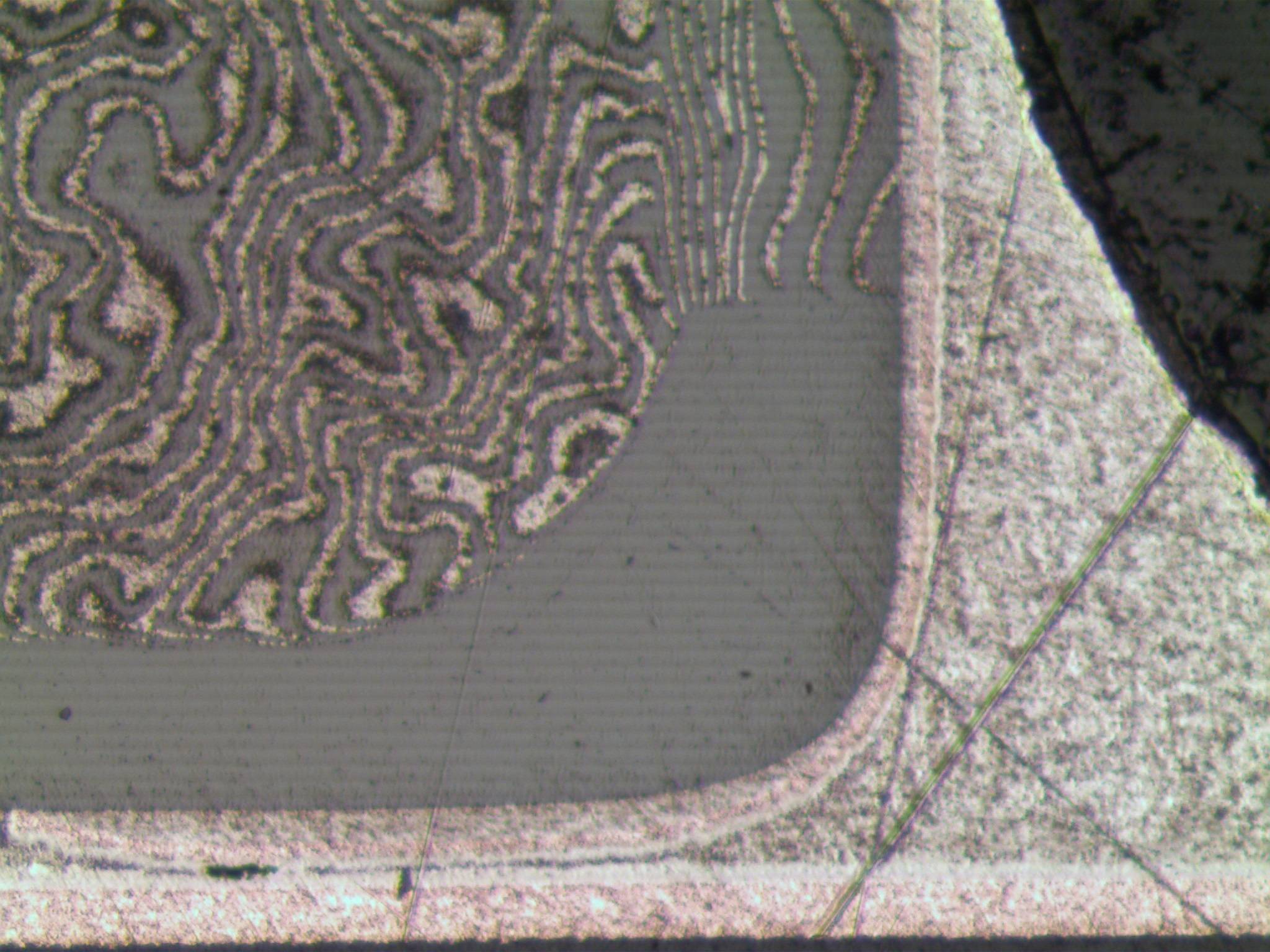 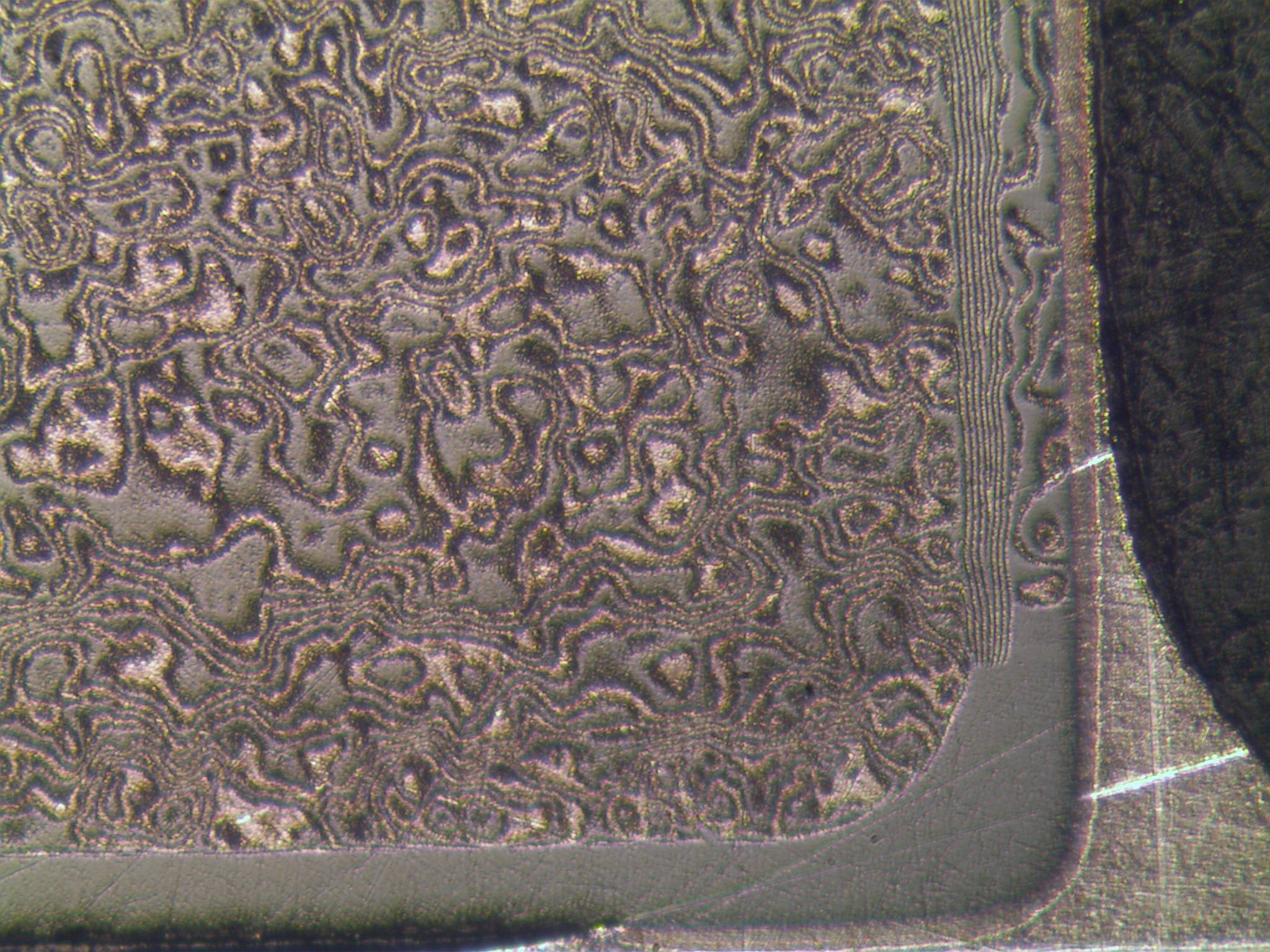 What is this?! Can e.g. high currents cause the layers to melt together like this? Or can this also be caused by my grinding and polishing?

Here we can see an air bubble in the solder. But the gap close to the bottom, can that be damage caused by mechanical stress? 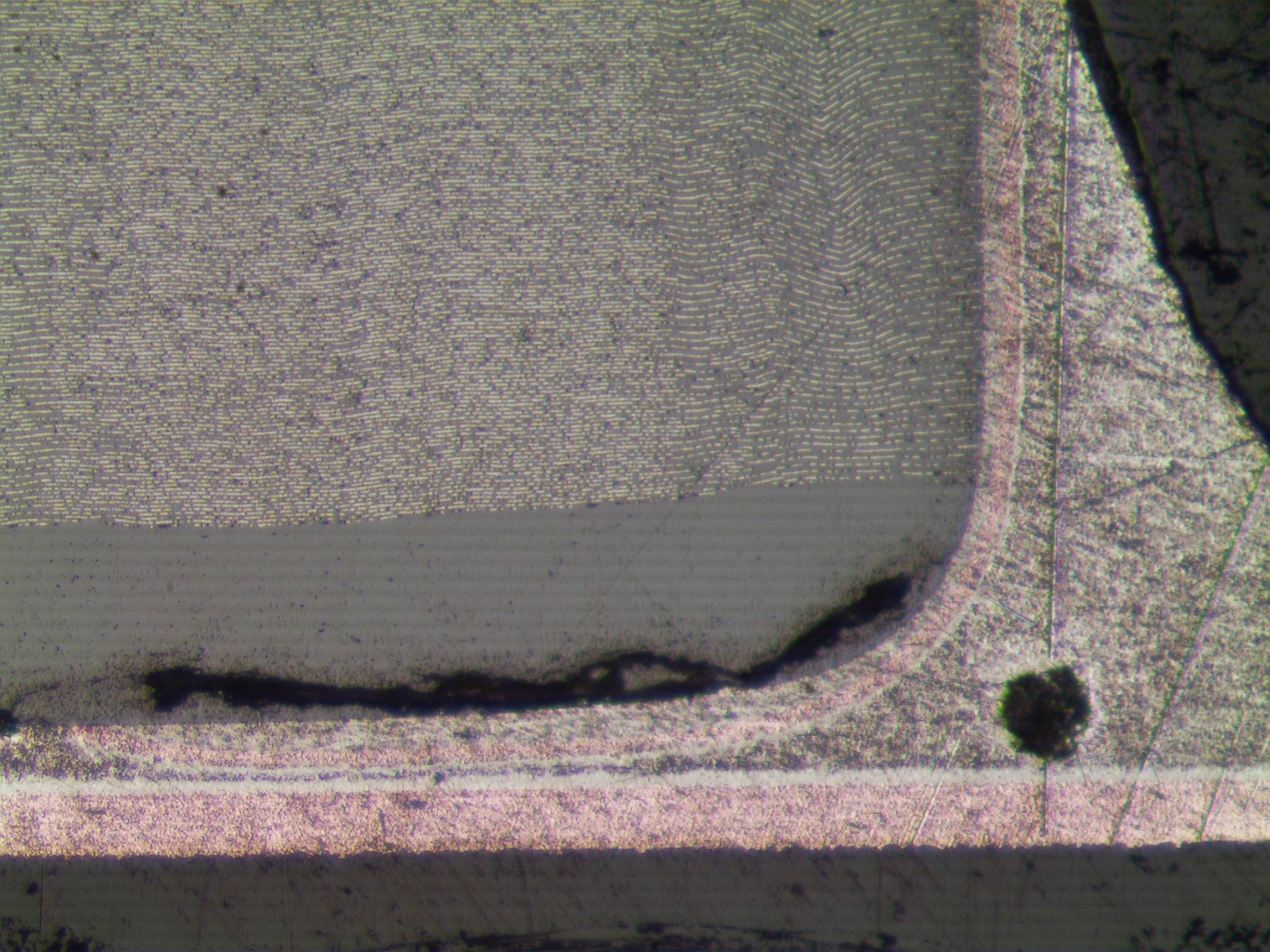 It looks to me like the grinding/polishing has been done fairly well (with more care you could have less scratches), and you're looking at an accurate and undamaged image of the capacitor cross section.

The "dark" images are more or less what I'd expect to see from a capacitor cut across the planes of the electrodes. Metal electrodes in a darker ceramic matrix. For lower value capacitors I'd expect to see thicker parallel lines, but for the lines to be slightly wavy and broken isn't a huge surprise. I expect that this results from the special steps they've taken to get the very high capacitance in a tiny package. Possibly a combination of grid electrodes rather than planes, and squashing/forming the ceramic after building the layers but before final firing in order to get the layers thinner.

The "pale" images are more or less what I'd expect for a capacitor sectioned parallel to the electrode planes. Assuming you've used a metallographic grinder (looks like it) then your section plane is flat, but the electrodes aren't. So you get contour-like features where the electrode crosses the section plane.

I doubt you'll find your leakage in these images. Other places to look:

I assume the purpose of this exercise is to source capacitors that are OK.

Unless you are buying gazillions of the things, and so would have the purchasing clout to make the manufacturer listen, doing physical analysis of the capacitors is not going to advance you along the road of being able to get good parts, even if you can figure out what's wrong and how to change the manufacturer's process.

First, identify all the different capacitor manufacturers. Then buy a few samples of a suitable capacitor from each. Measure their leakage before soldering. Solder to boards and remeasure their leakage. Identify specific part number that are OK to buy, or should not be bought, as a result of these tests. Then stick to good part numbers.

220uF is a lot for an SMD capacitor. You might get better results by using a less extreme capacitance/volume ratio, even if it means using more parts. Manufacturers use different ceramics for different C/V ratios, and you might find that leakage has been sacrificed for capacity in the particular size ratio you bought. Note that designations like X7R, Y5U etc do not identify the ceramic, only the tempco and tolerance spec. They don't identify the voltco (a very bad feature of high C/V ratio ceramics) and will also not identify any leakage specs.

Not the answer you're looking for? Browse other questions tagged capacitor analysis or ask your own question.