I am trying to add a height captor for a line of my production where I work. I found this Banner captor (QS30LLPQ) and it has 2 bipolar discrete outputs (PNP and NPN). Now, I am trying to decide which of those two outputs I should connect to the input card of my PLC. This input card is a sinking type.

My question is, if that is true? From what I understand, the sourcing output will drag voltage from the sensor and then the PLC will take it and sink it to the ground, thus bringing the input to a high state from the PLC perspective.

So, will that make my output in the sensor go to a high state when it is activated (it should detect boxes moving in front of it)?

In Figures 1 and 2, below, an external sensor is connected to a PLC input. Let's assume that the PLC input has an opto-coupler to the internal logic to isolate the sensitive logic circuitry from the outside world. The circuit, as far as external switches are concerned, is an LED with series resistor. If we short the input terminal to the common terminal we should expect about 5 to 15 mA to flow (determined by the internal series resistor).

In Figure 1. The opto-LED anode is connected to +24 V supply and the cathode is connected through the resistor to the input pin. When the input pin is connected to COMM- the LED will light giving a logic '1' to the PLC CPU. The sensors usually use an NPN transistor in this configuration. Either way, the PLC input provides or sources the current through the LED (red arrow) and is known as a "sourcing" input. Since NPN transistors can be very easily switched in this configuration they are generally used - hence "NPN" inputs - and the sensor "sinks" the current. 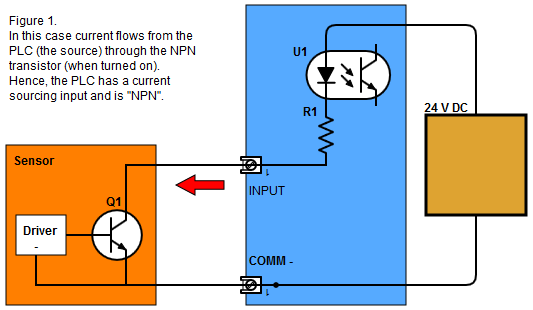 One major advantage of this arrangement is that the transistor can be powered from a supply of different voltage to the PLC - e.g., a 5 V micro-controller and once it shares the common negative it effectively becomes a level shifter between the two systems.

The main disadvantage is that the logic is somewhat inverted. A high voltage on the input is logic 0 and a low voltage is logic 1. This can be confusing. 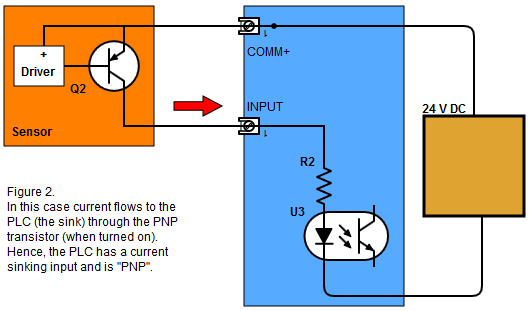 Figure 2 shows the PNP / sinking circuit. Here current flows from the + supply, through the transistor and the PLC "sinks" it.

The logic is the right way up now and this style of input is preferred on most industrial equipment at present.

Note some PLCs use bi-directional opto-isolators - two LEDs connected in opposite directions. By connecting the input common terminal to + or - supply the inputs can be made sourcing or sinking.

So, will that make my output in the sensor go to a high state when it is activated (it should detect boxes moving in front of it) ?

That depends on the sensor. Some provide a switch or teach mode to allow the user to configure it either way. Since it is being fed into a PLC you can inver the logic there anyway.

A more important consideration is what way you want the system to behave on loss of signal. i.e. If the sensor fails due to disconnection, etc., what will be the effect on the machine. If you are simply counting boxes then it won't matter. If you were filling boxes with stuff then you would want to make sure that the switch is configured to signal "box present" rather than box absent.

PLCs are great. Have fun.

The Banner sensor is powered from a 10-30 VDC source. Ideally your PLC input should be rated for the voltage at which you are powering your sensor. Then simply connect the black wire of the sensor to the PLC input. When an object is detected, the black output will go high as will the input to the PLC.

Not the answer you're looking for? Browse other questions tagged output input plc sourcing sinking or ask your own question.

1
Noise on Proximity switch signal on PLC system
0
Is it possible to accept analog input, digital input and provide digital output and analog out on a single MCU Pin?
1
Power used by a PLC for communication
0
PIC16F15345 Microcontroller, RA5 Digital Input Pin Issues
0
How can I connect two mutually exclusive output on one pin of a MCU?
0
How to connect multiple sensors to single PLC input?
1
Interfacing 24VDC output with 5V TTL input