Does cassette tape change its velocity while playing?

Looking at the old cassette tape, 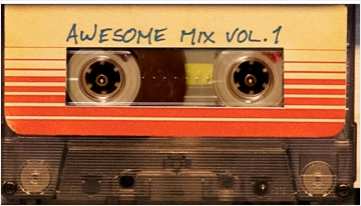 But looking at the right wheel, which is the one that's pooling the magnetic medium - its radius is growing(!) over time.

I don't think that's true. What is really going on here? Radius is growing over time, for sure. I also assume that \$\omega\$ is constant. so did \$v\$ increase?

The details of how a cassette drive works are well covered by this Wikipedia article. The tape is pulled by a capstan next to the playback head, and this capstan pulls the tape at a steady rate. 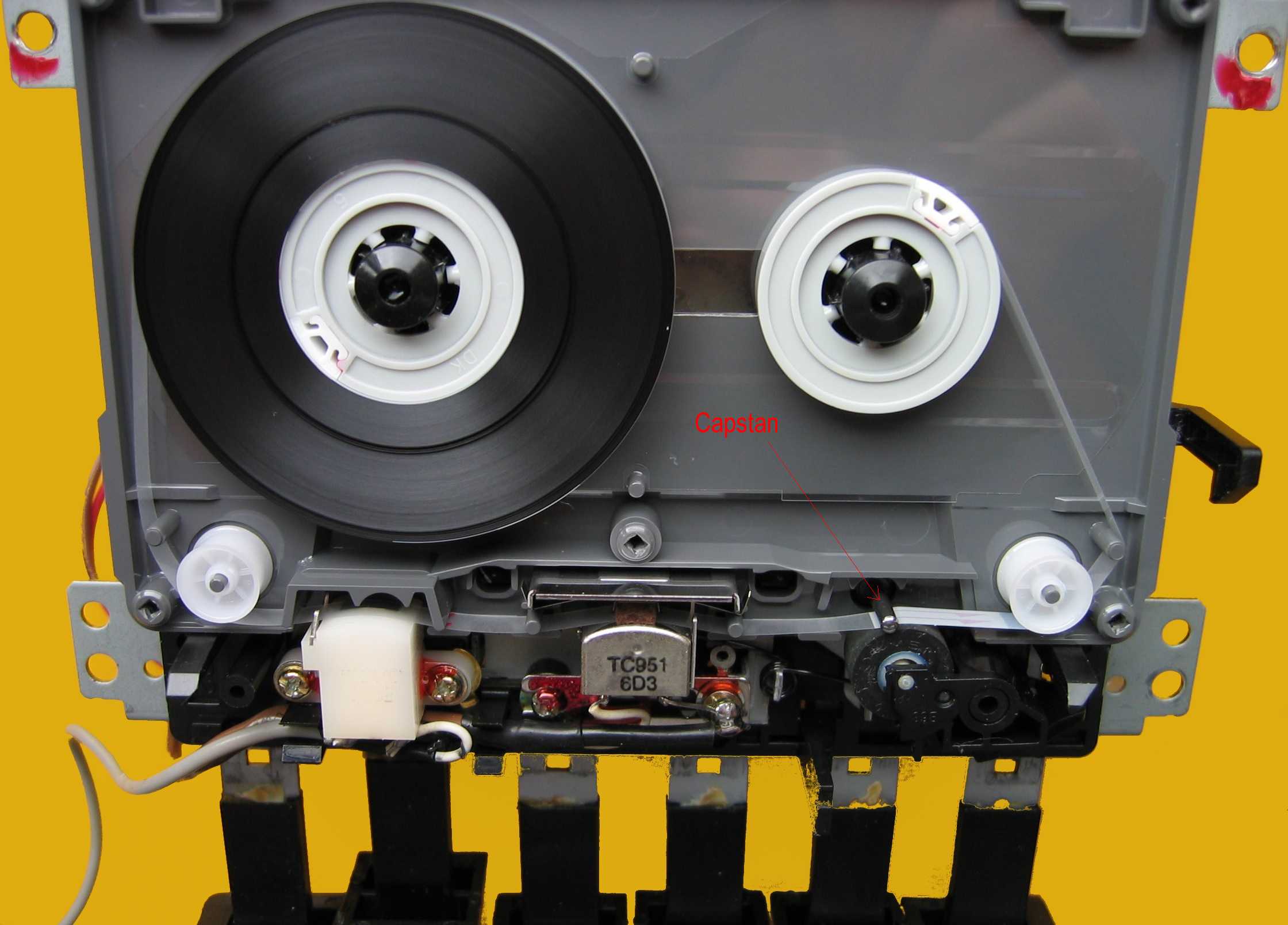 (picture from the Wikipedia article)

You probably need to click on the picture to see it full size. I have indicated the capstan by a red arrow. The take-up spool doesn't rotate at a fixed speed. It uses a slipping drive, as badjohn says in his answer, so it takes up the tape at the speed the capstan moves it.

The specific mechanisms for cassette players and decks largely depended on how much you paid for them.

On a one or two motor system there would be a slip mechanism driving the take up and feed reels. The feed reel need to put reverse pressure on the tape to maintain tension across the heads.

The clutch that allowed the reels to turn at variable speeds could be a simple as letting the belt slip on the pulley. I saw a number of these when disassembling broken players as a kid. On three motor systems, the reels would be driven in the appropriate direction by its own motor. Presumably it was a relatively low torque motor so it would not stretch the tape.

Either way, the rotation of the capstan, pressing against the pinch roller would govern the speed of tape travel. The 1 7/8 inch per second speed was the standard, but some players could play at other speeds, usually to extend the recording time for low fidelity used, such as voice notes.

The speed past the head is constant: 1⅞ inches per second. A slipping clutch allows the take up reel to vary its speed as required.

The very early cassette players did not have capstan drive. The tape was driven from the takeup spool. As a result, the speed of the tape did vary. That was not a major problem as long as you record and playback on the same device. The device was meant to be cheap, not high quality.

Later cassette devices, driven by the high fidelity craze of the 1960's, incorporated capstan drives that maintained a constant tape velocity over the record/playback head, as previous responders have noted above. That made tapes portable from one device to another. The cassette drive manufacturers would try to outdo each other with wow and flutter specifications, and the devices became more expensive. I just trashed mine because the rubber rollers and belts inside are shot and there are no replacement parts available.

I wonder if I could fabricate rollers from RTV silicone caulk... possibly chilling the material with dry ice and turning it on a lathe... Hmmm...

Not the answer you're looking for? Browse other questions tagged motor music or ask your own question.

25
In earlier tape recorders, how was tape spool angular velocity adjusted?
0
What kind of DC motor is this and what does the circuit do?

8
Limiting current for a DC motor
8
How does a hair dryer change its motor speed? Diagram included
0
Dahlander winding: Does the voltage rating change between connections?
0
why are pm (permanent magnet) machines synchronous? and how do I start them?
1
DC motor constant acceleration
9
Why does my BLDC motor change behavior at high speed?
0
Power consumption for an in-wheel motor
2
Sizing a motor for a conveyor
0
VHS(C) tape speed issues - how does the speed change for different modes?