This is a question about hard-field back-projection as used in x-ray tomography, but applied to magnetic induction tomography (MIT). Al-Zeibak and Saunders (A feasibility study of in vivo electromagnetic imaging, 1993) have shown that an x-ray filtered backprojection method, can be applied to an exciter and receiver coil, with a straight line of magnetic flux between them along the central axes of the 2 coils. Therefore this would take the place of a straight-line beam of x-rays, to scan and image the sample object (plastic container of saline solution). 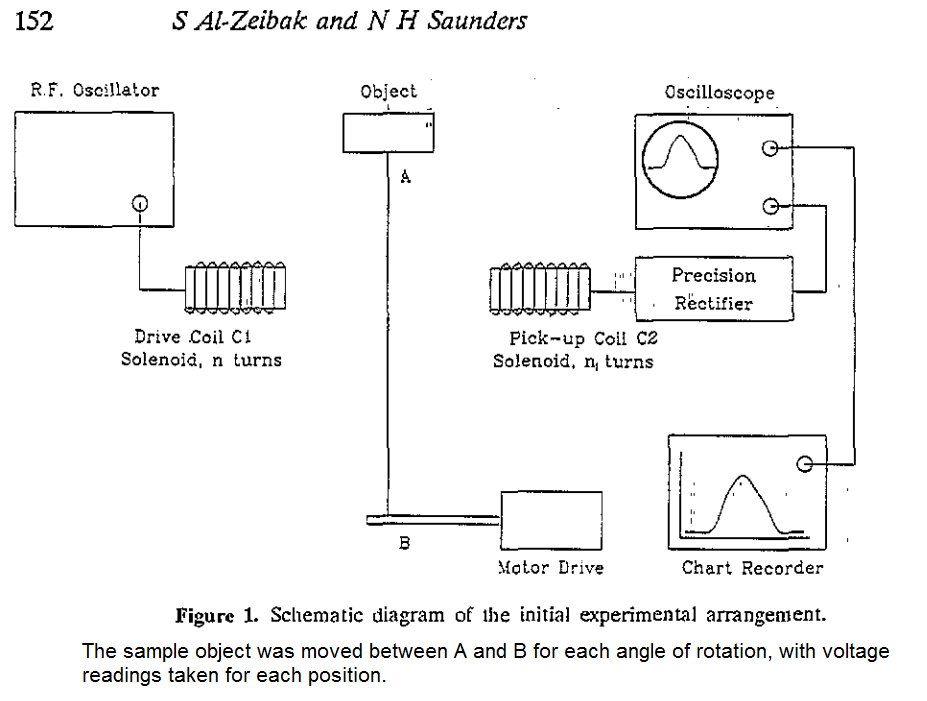 In place of the summation of the x-ray attenuation coefficients (mu),

they appear to detect the summation of voltages by the receiver coil:

Where V(x,y) is the voltage in the object at (x,y)

Would it be possible to convert this (Al-Zeibak and Saunders method) to a square Helmholtz-coil assembly, providing a uniform AC magnetic field (i.e. straight lines of flux) and a square array of air-cored inductors as the receiving/sensor coils. So that a metallic object being scanned would generate a summation of voltages for each approximate straight line of flux of the Helmholtz coils?

It turns out that it is possible to image slices through a metallic object such as an Aluminium coke can, using hard field magnetic induction tomography (MIT)

Back Projection in x-ray tomography and MIT, shown in figure 1, is a basic method of imaging cross-sections through an object. 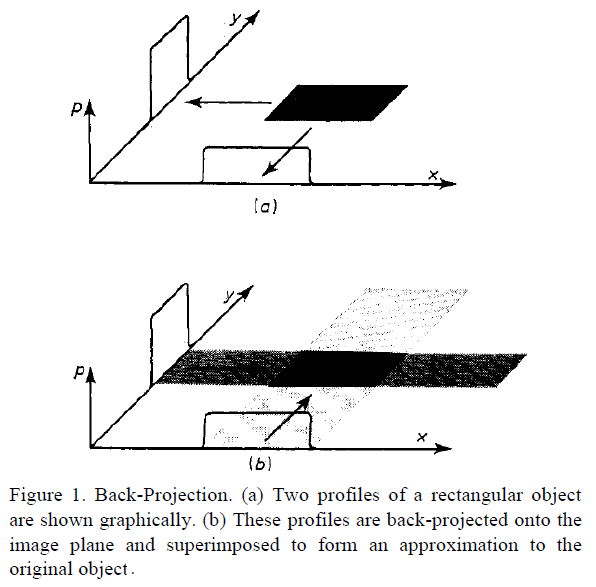 For x-rays, back projection uses the summation of x-ray attenuation coefficients and for MIT we will use the summation of voltage phases between driver and sensor coils, but the method is essentially the same. In the most simple case, back projection, as shown in figure 1(a and b) involves the object being imaged in 1D by a row of sensor coils at 0° and also 90°, thereby obtaining a projection as shown on the x-axis at 0° and one on the y-axis at 90°. Using an algorithm the 2 projections are smeared across x-y axis as shown in figure 1(b). This is achieved by summing the phase values of the x and y axis projections so that the intersection of the 2 projections is highlighted. Interpolation of x-y values is also used to increase the number points in the cross-sectional mapping procedure to 32 × 32. The main part of the code for this is shown in figure 3, and the equation of simple back projection is given in (1) and (2)1.

Also see figure 2. In the following ‘ray’ can be interchanged with straight lines of ‘magnetic flux’. $$\hat{f}(x,y)$$ is the approximation to density-function produced by Back projection; $$p(r,\phi)$$ is the ray-sum or ray-projection, or 1D projection of phase shown in figure 1(a); 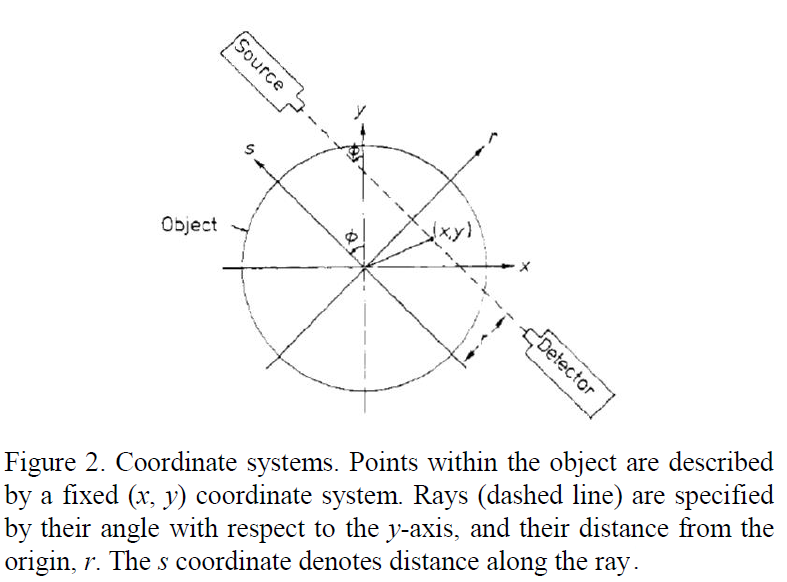 𝑟 ‒ distance of a given ray from the origin (figure 2); 𝑠 ‒ path length along a ray; 𝑓(𝑥,𝑦) ‒ density-function of object (linear attenuation coefficient in the case of x-ray tomography, and phase angle in MIT); 𝜙 ‒ angle between a given ray or group of rays and the y-axis; m ‒ number of projections.

Figure 3. Main part of MATLAB code2 to interpolate and smear projections at 0° and 90°. Note functions frac and hb are not used here.

The value of $$tw=\frac{1}{1.15√2}$$ is for the worst case scenario of the row of coils being rotated 45° around the object or vice versa, when more rotations are used. So that in the square image 14 coils can fit diagonally across the image, which is 16.4 cm. 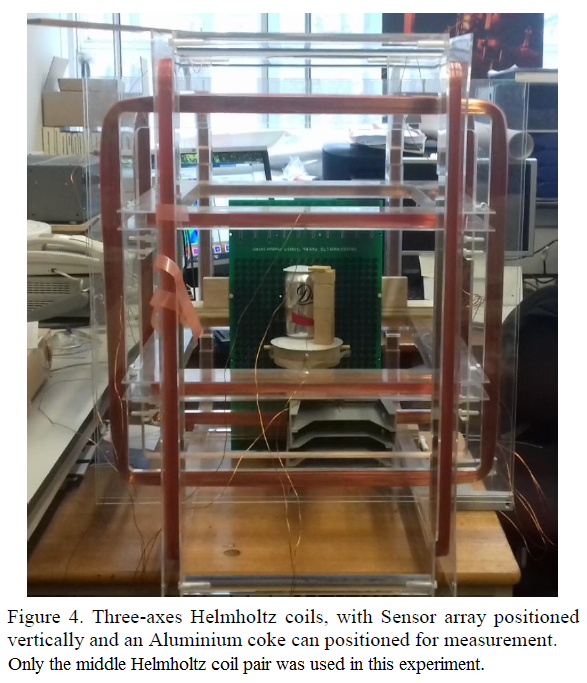 The 1.15 value is because MATLAB will not accept 1/√2 in this operation. The maximum on x and y axes is 10 coils = 12.7 cm. Figure 4 shows the setup. So far using the method described above a simple back projection image taken at 0° and 90° projections is shown in figure 5. Better images were obtained when the Aluminium can was moved closer to the sensor coil array. 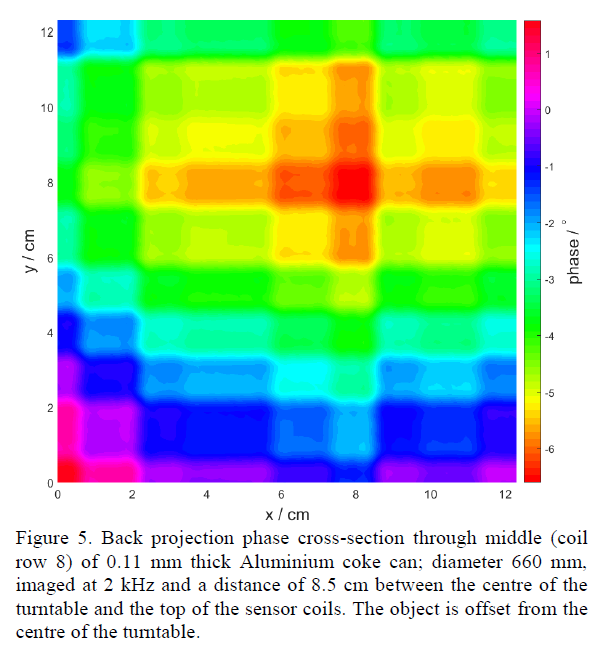 Clearly not. If the goal is to sample that one magnetic line of flux that lies along the solenoids' common axis, you can't use a coil that also intercepts many other lines of flux as well. There's no way to remove the influence of those other lines from the resulting signal.

You also cannot create a "virtual coil" that has a smaller effective cross section than the physical coils you're actually using.

Not the answer you're looking for? Browse other questions tagged electromagnetism imageprocessing magnetic-flux x-rays or ask your own question.