Driving a laser diode with an LM317

I want to make a a line of sight sensor. I want to drive a laser diode with constant current and aim it at a photodiode, then using a transimpedence amplifier I will monitor any changes in light intensity. The reason I am using a photodiode and a laser diode is because I want fast response times.

I have in my hands 2 OPV382 laser diodes that I fail even to turn on. I am using an LM317T to provide constant current to my laser diode. In the datasheet it states that the diode starts conducting at less than 2mA and that the maximum continuous current should be 12mA. I decided to try with a low current first just to be on the safe site but nothing happened.

My circuit was a resistor between the adjust and output of the LM317T to set the current and then the laser diode connected to the output and to ground. I used various resistor values from 220 Ohms to about 70(and connected the laser diode only momentarily but still nothing).

I also added another resistor from adjust to ground to set the voltage to 2.2V that is the maximum forward voltage and again nothing. Can you explain to me what I'm doing wrong? The supply voltage is 5V(measured 4.9V)

The only thing I can think of is the series resistance of the laser diode which is 20-55ohms according to the datasheet, could this be affecting the rest of the circuit?

The laser diode requires 7 mA and it will drop a maximum of 2.2 volts at that current. If you have a regulated 5 volt supply, you can simply put a 400 ohm, or slightly larger, resistor in series with it. A 1/10 watt or higher power rating for the resistor will be more than sufficient.

Since the laser is infrared, you will not be able to see it with the naked eye. But a clever trick is to look at it with your phone video camera. Most phones are quite sensitive in the infrared range. You can confirm that this works with your phone by trying it with your TV remote. You should see flashes from the IR LED when you are pushing a button on the remote.

I'm going to go away from W9IQ's answer and say do NOT use a resistor as a power supply, especially if using a battery, or over a long time. This can over-current your diode and burn it out (which they do quite easily, I may add). A simple circuit to control the current going through your diode my be as follows. this sample will push 7.35mA, and a larger resistor can be used to push less 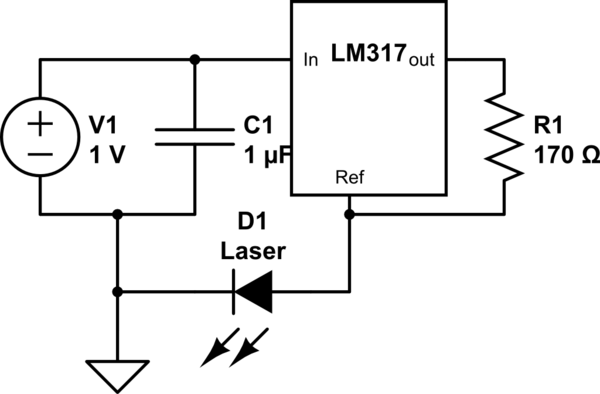 Not the answer you're looking for? Browse other questions tagged diodes driver laser lm317 or ask your own question.