I have a 3v motor driven by a MOSFET that gets its input off an inverter circuit that comes off the output of a 555: 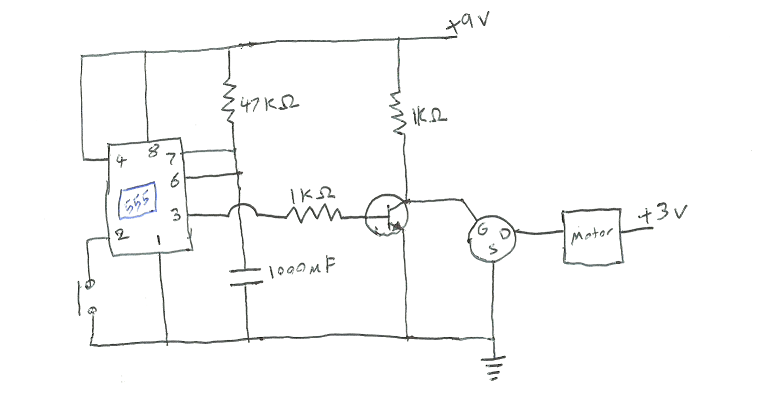 The idea is that when you press the button, it waits for about 20 seconds and then starts the motor. (It's for a rotating banner that goes under a drone, I need it to start spinning after the drone lifts off from the ground and not before!)

So it seems to work if I put an LED instead of the motor, but with a motor it makes a mess and becomes flaky. Sometimes the motor turns on, sometimes it doesn't, sometimes it runs for a few seconds and then turns off.

Motor is supposed to run on 3v, but I think it's not getting the full 3 volts. It's hard to measure as the voltage seems to change when I put the voltmeter on! When I replace it with an LED it seems dimmer than it would be if I hooked it up to straight 3v.

(The "GDS" circle thing is an IRFZ34N N-Type Power MOSFET, sorry I didn't know how to draw it.)

Any ideas what I might be doing wrong and how I can get this to work? (Thanks for your patience, I'm a bit of a noob)

I bet you will learn a lot more if you figure it out yourself.

So, rather than telling you the answer, I am going to help you to get the answer yourself.

First break the problem/circuit into parts and check each part against how you think it should work.

For each part, consider what is required for each state. Start at the Motor and work backwards and check each with a DVM until something doesn't respond as you expect it would.

Ex: For the FET

Not the answer you're looking for? Browse other questions tagged mosfet 555 or ask your own question.