How to map RGB LED to wavelengths?

I've made a really primitive spectrophotometer using an RGB LED and a transimpedance amplifier, and I'd like to fine tune it a bit. Most importantly, I was wondering if it was possible to map RGB values to a specific wavelength so that I could graph output voltage values against wavelength values. I found this online tool: Link here, but I'm not sure if it's accurate for an LED. Also, I found that most colors appear uniform with the LED, but mixing equal red and blue is always distinctly red and blue; i.e., it doesn't appear purple. Any suggestions/input? 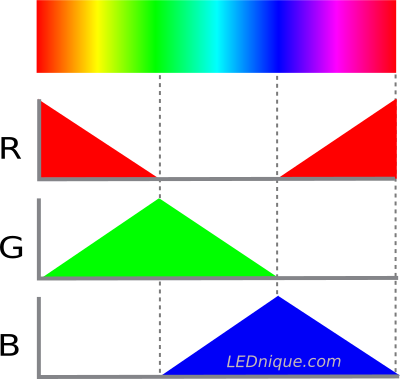 We tend to think that by mixing RGB intensities that we can generate any colour or wavelength. This is, in fact, not true. What happens is that due to the way the eye is designed that we have the perception of the new wavelength. 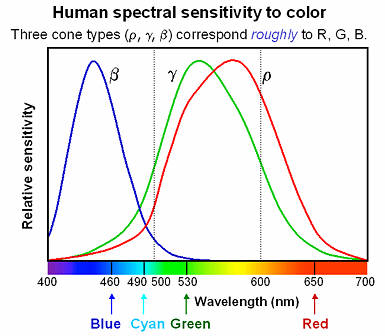 The perception of colour is due to the relative signal strength detected by each cone.

Most importantly, I was wondering if it was possible to map RGB values to a specific wavelength so that I could graph output voltage values against wavelength values.

No. The wavelengths emitted by your RGB LED won't change - only their relative intensities. (They might shift slightly due to temperature at higher brightnesses but not as much as your question suggests.)

An RGB LED produces only three frequencies, (in different mixtures) so with an RGB LED as source you can measure at only those three (rather broad) frequency peaks.

So you have a spectrophotometer that produces only three data points per assay, I think "rather primitive" is an understatement,

Not the answer you're looking for? Browse other questions tagged led rgb or ask your own question.

2
LPD6803 RGB LED Strip with an Arduino
1
What value resistors should I use for this LED?
3
RGB led driver maximum current
4
LDR + RGB Led = Color sensor. How to calibrate it?
2
how to get the RGB value of a color using phototransistor or photodiode?
1
Choose the right resistor for your RGB led (calibrate the colors)
4
How can I stop the flicker of LEDs?
2
Why is my RGB LED strip passing current through the transistor?
1
How do I interpret an RGB LED max amperage given as a range e.g. 30mA-70mA?