Electronic component that is like an LCD version of an LED?

Is there a liquid crystal display version of a light emitting diode? I want a visual indicator that is a small and simple 2 pin device like an LED, but instead of emitting light it just turns black or white, or black and clear like how an LCD screen does.

I want to make a solar electronic compass. Its a magnetometer wired up to a solar panel and then to some kind of indicator that turns on when you point north. LEDs would be perfect for the indicator except they cannot be seen in sunlight, and they drain several milliamps which is a bit much for a solar panel.

LCDs can operate in the microamp range which is perfect, and can also be seen in direct sunlight because they reflect light. This seemed like an ideal fit, but most LCD modules I can find are several inches across which is kind of big for what I had in mind. They also involve a lot of pins and complex interfaces. Also the cheapest LCD modules I could find cost about 2 dollars. All of this is a bit much for a simple on-off visual indicator. LEDs cost like 2 cents each for comparison.

After that I looked into 7 segment displays, but almost all of those that I can find for a reasonable price are LED versions that you would be unable to see in sunlight, and would again draw too much power. They make LCD versions of these too, but they seem to be much more rare and expensive. Again you have a lot of pins and large sizes and higher costs.

All I want is a little plastic dot that can turn black or clear when you run some power to it. Does this exist? This doesn't seem like it should be so hard to find. Does humanity not have little black dot technology? We definitely have little glowing dot technology; you can get LEDs in huge packs for cheap in every color of the rainbow. I guess you could call this a "LCD pixel" or "single-segment LCD display" or something like that. 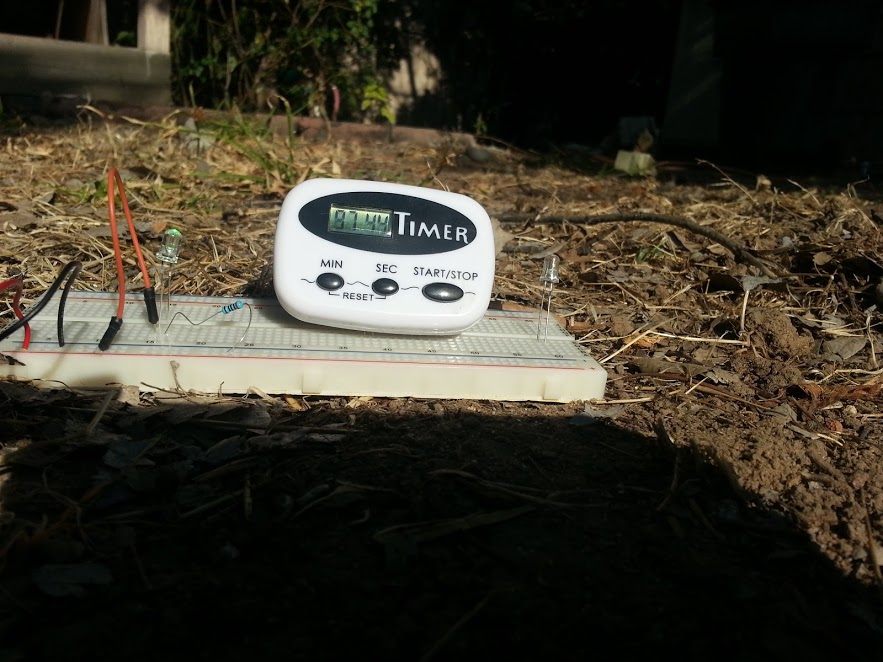 Direct sunlight. Left LED is on, right is off for comparison. 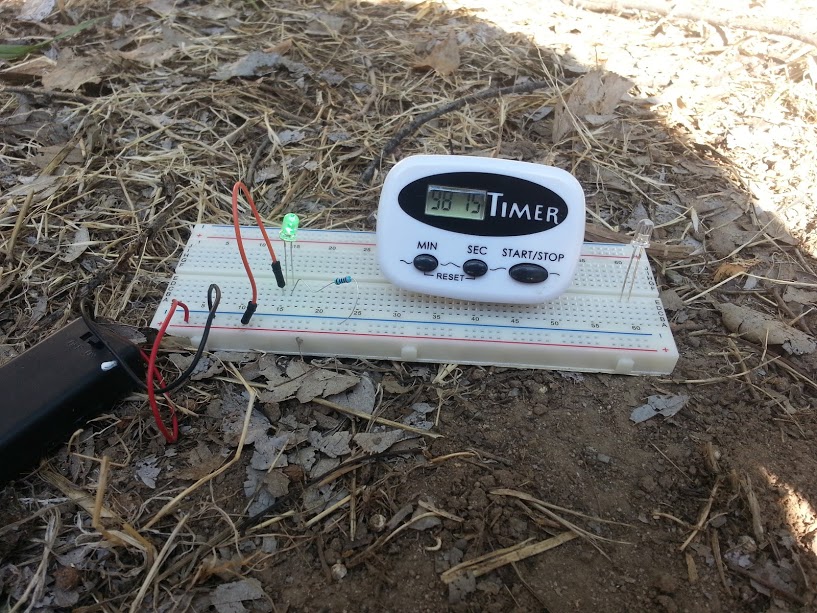 Outside but shaded. Left LED is on, right is off for comparison. 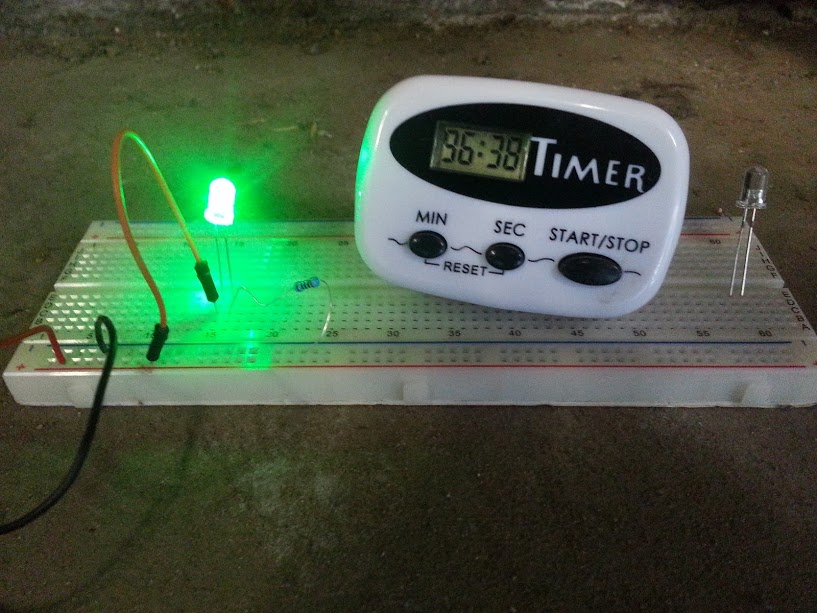 I really could see the green LED even in direct sunlight. It was faint, but I could tell that it was on. The LED on the right is completely unpowered for comparison. This LED drew 3.25 milliamps. The LCD I used to compare is a cheap eggtimer I got from walmart for 88 cents.

Judging from the posts here it does not seem like this circuit component exists. The light valve was the closest one and they don't make them small enough to be used for a small indicator.

Could we get this made? Based on the large number of views relative to other questions asked on this site it seems like people are interested in a component like this. Is there any chance that writing to some kind of LCD manufacturer could get something like this made?

I know LCDs run on AC power, but I also know factories can build fairly complex circuity right into the plastic somehow. I have seen LEDs that have built in blinker mechanisms, where you just hook them up to a battery and they automatically blink once per second. The blinking circuit is built right into the base of the LED so small you can't even see it. It seems like they could do a similar setup with some sort of h-bridge to invert the power to AC so the LCD would work even just hooked up to regular dc power.

Another possibility was a "Grating light valve" which uses microscopic metal ribbons instead of liquid crystals. As far as I can tell it runs on DC power. It also looks like the patent is just about to expire.

The closest thing I can think of to what you're describing is an LCD light valve. It's a single piece of LCD glass with two electrodes on it. If you've ever used a self-darkening welding helmet, this is what's used to make the window in those. Most of these will probably be bigger than what you have in mind, though.

If you plan on manufacturing this product in quantity, contact an LCD maker. They make custom LCD glass designs all the time -- you could probably get a real "compass" design made, instead of just a single indicator.

A better solution for this may be a mechanical thing. This could be a device that works similar to the pixels of a high contrast dot matrix sign where a colored dot is flipped between color or black.

You can buy relatively inexpensive E-Ink modules that have very simple displays (just a few dots / pixels). They provide extremely low power consumption, can be seen under direct sunlight, and interface similarly to LCDs.

If you need low power consumption and ability to see in sunlight, I would recommend using an e-ink display.

What you might look for is a single pixel, negative mode, TN (twisted nematic) lcd glass. It's black in powered or unpowered mode, depending on polarizers used.

This is an old question but this might fit the bill.

It requires considerable current to flip (a couple hundred milliamperes) but it’s just a 2ms pulse.

Not the answer you're looking for? Browse other questions tagged led components lcd indicator outdoors or ask your own question.

6
How are dot matrix LCDs controlled?
5
Name and reason for space between pixels on an LCD display
1
Any more subtle alternatives for LEDs to indicate status?
1
Creating a "virtual" LED display
0
Replacing a sound module's LCD/EL backlit display with a LCD/LED backlit display
6
Why not use monochrome LCDs instead of E-ink?
1
How can I indicate that an IR LED is functioning without detecting its emissions?
1
Get LED that is steady to flash when voltage drops below set value using 3V battery
0
LED indicator component with separate power and signal inputs
1
OLED (or other) screens combined with e-ink