I wanted to understand how colpitts oscillator works and so I tried to simulate one in proteus. I have a common emitter amplifier with a gain of -10 (inverter) and a the tank circuit with the 2 capacitors has a gain of -0.1 at resonnance so I would expect to have some maintained oscillation at the output of C6, but I don't get oscillations. Why is that? (don't pay attention to the oscillation on the left figure, it is for an other circuit). 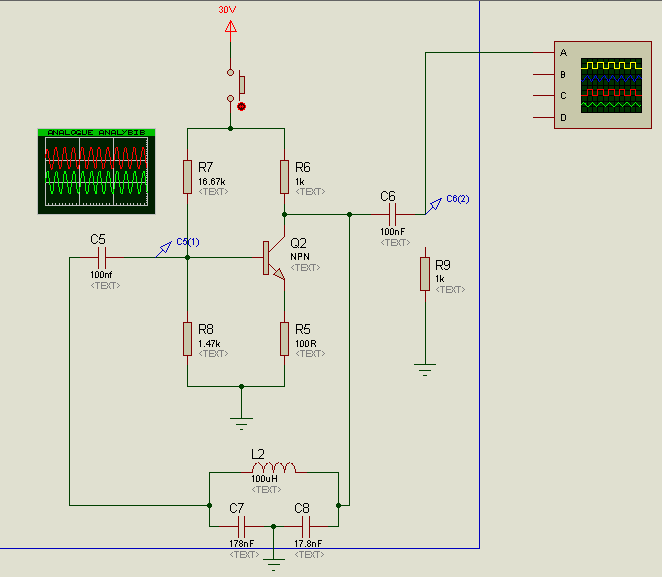 strange, I added a 10uF decoupling capacitor between the emitter of the BJT and the ground and now it seems to oscillate. Do you know why?

Resonance is something that this type of oscillator doesn't run at. It runs off-resonance i.e. the peak of magnitude that the resonant circuit is capable of does not produce 180 degrees phase shift and if it doesn't produce that phase shift it won't oscillate at that frequency. Peak resonance can be up to sqrt(2) lower than the frequency that produces the "right" phase shift.

The inductor and twin capacitors are intended to produce a phase shift of 180 degrees and when this is added to the 180 degrees (inversion) produced by the common emitter amplifier, you reach a point where sustained oscillation is possible.

If your gain at resonance is -0.1 then your gain at the frequency where the "right" phase shift is produced will be less. You should increase your common emitter gain in stages until it oscillates.

Because your circuit values are impossible to read I can't really confirm your claim about circuit gain and tank loss but, for what it is worth, at the oscillating frequency and with equal value capacitors, the tank gain should be 6 dB and this includes the effective output resistance at the collector so you are probably loading the tank output too much and lowering its theoretical open-circuit gain.