For a given op amp, in my case a OPA197 by TI, I'm trying to calculate the output impedance for a near DC signal.

The datasheet gives an "open loop" output impedance of 375 Ohm, to me that seems high, unless I have lulled myself into believing op amps are more ideal then I though. I expected something in the 10s of Ohms. Also Wouldn't an output impedance be gain dependent?

Can anyone give me the proper way to find/calculate output impedance? Note I'm not looking for a method to measure it.

This question may have the answer and I am just not understanding... 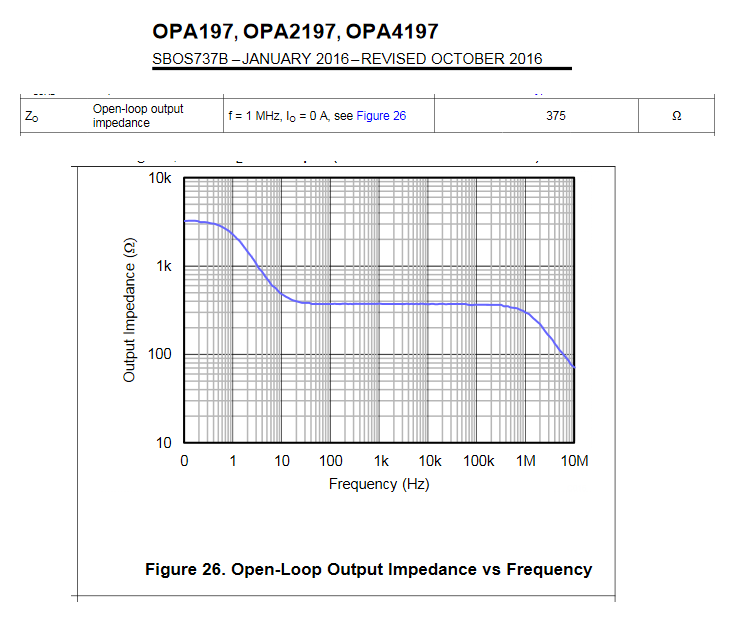 When the amplifier is operated with the "loop closed" i.e. it is run at (say) a gain of unity or ten or other normal sorts of gains, then the effective output impedance drops massively from 3 kohm to sub 1 ohm at DC.

This is due to the effect of negative feedback. So, you look at the open loop gain (about 120 dB or 1 million at dc) and factor this and the circuits target closed loop gain to calculate closed loop output impedance.

One more thing to remember is that the open loop output impedance is a real measure of the output transistor's ability to deliver current to a given output load so consider this: If the DC output impedance is 3 kohm and the load is 1 kohm, the maximum peak dc voltage that can be produced at the output is severely limited by this potential divider irrespective of the chosen closed loop gain.

Personally, I think that TI are potentially pulling the wool over people's eyes given that they state in the DS (page 8) that the maximum volt drop with a 2 kohm load (to mid rail) is only 500 mV. They refer to this as: -

And, it can only be for high frequencies else it contradicts the open-loop output impedance graph. Be aware of this.

However it is current limited to less than the short circuit current.

The datasheet gives an "open loop" output impedance of 375 Ohm, to me that seems high, unless I have lulled myself into believing op amps are more ideal then I though. I expected something in the 10s of Ohms. Also Wouldn't an output impedance be gain dependent?

On a non rail to rail opamp, you can expect an output stage like the one on the left:

This emitter follower topology has rather low open loop output impedance. However, it is not rail to rail. The output can't go higher than Vcc minus one Vbe, minus the top current source's minimum voltage.

The schematic on the right is rail to rail, but then we have a common emitter output stage, and the output is taken from the collectors.

So, yeah, without special circuitry, a rail to rail opamp will have higher open loop impedance due to the topology of its output stage. It counts on feedback to lower it.

Low OL impedance in a rail to rail opamp indicates the designers employed some clever local feedback around the output stage to improve performance. It's a compromise wrt cost, idle current, etc, as usual, can't have everything.

3
Why only common collector method is used in class AB amplifiers?
1
Output impedance of Op Amp with Voltage Divider?