How to power 24 7-segment displays with Arduino?

I'm working on an Arduino project where I need to power 24 7-segment displays (model Kingbright SC56-11YWA).

I decided to control them using 8 bit shift registers (model 74LS164N). This is working fine for one prototype. But already I notice that the segments are brighter when there are only two lit up as opposed to all 7.

Will an Arduino (Mega) be able to handle this when I connect all 24? Or is it OK if I use an external 5 V power source (converted from AC) for all the shift registers?

There's a 220 ohm (around that number) resistor connected at the 7 segment GND. I suppose decreasing that number or eventually omitting the resistor, would also do something, but maybe not enough for 24 of them.

I hope my question is clear. 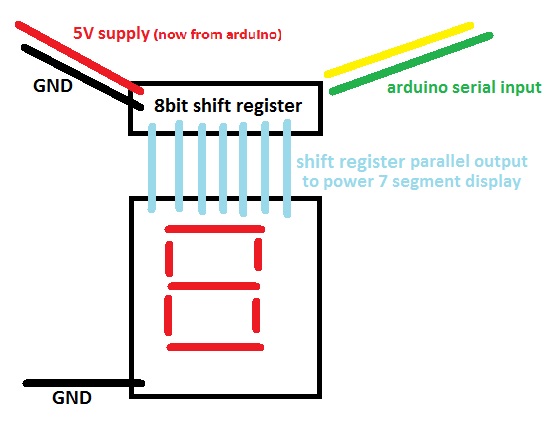 You should be able to drive this very easily with nothing but the Arduino Mega and 8 resistors, so you don't necessarily need 24(!) shift registers. You won't be driving all of them at once, you'll be driving one of them at a time. But it will be the simplest to build and take no extra chips. In all, you'll probably need 32 of your pins, but the Mega has no shortage of pins.

Remember that each of the IO pins is tristate. Putting them into input mode puts them into high impedance mode, which is like putting a very high-value resistor on that pin, essentially removing its effect from the circuit. By wiring each of the common cathode pins to IO pins and setting all of them to input, you can then set single pins to output low (connecting it to ground) and drive a single digit at a time. Then all you need is a timer and cycle through each of the digits.

The only thing to consider here is how much current you're sourcing and sinking through the MCU. But for only 8 LEDs at a time, I think it should be OK, depending on how much current they like and what else you're powering with the MCU. I tend to go for designs with fewer external components, so this is the solution that appeals to me.

Also, the others are right in saying that a single current limiting resistor on the cathode is not sufficient. Your brightness problem is either related to this, or to the amount of current your shift registers can source.

Next, the LS164 is a bad choice. You want a latched shift register, where you can freely shift data without disturbing the outputs. The TPIC6C595 is compatible with the often (ab)used 74HC595, but the latter can't supply 20mA to all outputs at the same time. (The supply current for one 74HC595 should never be greater than 70mA!) The TPIC6C595 outputs are open drain to ground however, so you'll need common anode displays.
(You would also need common anode displays for a low-power Schottky shift register like the 74LS164. LS-TTL can hardly deliver any current, and even can't sink enough to drive the LEDs!)

Dimmer LEDs when there are more connected often points to a too short duty cycle when multiplexing, but I think this is supposed to be static. Check the power supply to see if it can deliver the required current. Count on 20mA per LED, that's a total of 3.4A! That's a lot, and may be the cause of your problem. Note that multiplexing will add complexity, but will do nothing to save power; you'll need exactly the same.

The Common Cathode resistor is limiting the current

With your current circuit, you've connected a single resistor to the common cathode. That will cause the current to be dependent on the number of segments which are lit at a given time.

Each LED will drop approximately the same forward voltage. For the standard red indicator LEDs in most 7 segment displays, that's about 2 V. Assuming that you are using a 5 V driver, that leaves 3V to be dropped over the resistor. Ohm's law says that the current through that resistor is given by:

or about 13.6 mA. This 13.6 mA will be constant regardless of how many LEDs are lit. If you light all 7, the current in each will be 13.6 / 7 ~= 2 mA. The current in an LED is proportional to the luminosity; 2 mA is barely visible. To fix this, you need to connect a resistor to each anode of the LEDs. This will allow for 13.6 mA in each resistor which does not need to be shared. The current through the common cathode can then be 13.6 * 7, so you'll get full brightness.

That is a lot of resistors, however. If you're using through-hole resistors, it could increase the size of your circuit considerably. You can save board space, soldering time, and component purchasing cost by writing some slightly more complicated software.

An alternative control mechanism would be to only illuminate one segment at any given time. By blinking (or not blinking) each segment at 200 Hz or faster, your eyes will see the average. Because the LEDs will only be illuminated for 1/7th of the time that they would be with individual illumination, the average luminosity will be less and you'll want to increase the current. Over 20 mA or so, these LEDs won't increase in brightness appreciably so just use a 150 ohm resistor.

As already mentioned by UziMonkey and most others, a single resistance at the cathode is 'dimming' the segments as more segments are to be lit up. The current thru' the resister ought to be more when more segments are lit, and this increases the voltage drop on the resister, which is why they are getting dimmer. You need to use 8 separate resistors on the anodes, so the above wont happen.

About Driving multiple LED segments. Use a 5 to 32 TTL Demultiplexer(aka demux, example : 74LS154) so you will get to control upto 32 7-segment LED modules. The 5-inputs to this demultiplexer shall come from the arduino. Connect all the 24(or 32) outputs of demux to the cathodes of 7-segment LED modules. Now, The Arduino will drive the 7 segments thru 7-lines, and the demux outputs will select which display is to be 'ON'. Several factors like voltage to be applied to the LED segments depends on the scan frequency of the Demux.

I agree with @stevenvh, see the DayCounter Kit - it's basically your project modularized using 74HC595 latched shift registers. We also provide cables to chain boards together and extension cables for the 7 segment displays. I even wrote an Arduino library for it that handles arbitrary chaining depth. See schematic here.

As promised, here is the unedited response I got from Texas Instruments to the question of "How much current can each pin sink in the context of driving LEDs, and is there a limit for the overall current that the outputs could sink?"

The SN74HC595 can sink or source a maximum of 20mA from each output. The limiting factors are two fold:

So you can have individual outputs sink or source 20mA max , but the total for all of the outputs cannot exceed +/- 70mA. As long as you meet this spec you can drive LED's as long as the current draw per output does not decrease to less the forward voltage of the LED.

I have several projects that use 595 shift registers to directly drive 7 segment displays (Thru resistors!). I was aware of the output pin limit of 20mA per pin but unaware of the total limit on VCC and GND of 70mA. One of my projects is a LED clock that uses abacus type rows of LEDS to show the time. The first 595 controls the 8 LEDS from 1 to 8-o-clock. Between 8 and 12 am or pm, all 8 of these LEDS are lit. I am using 220 ohm resistors on each output, which equates to aprox 15mA per pin. 15 X 8 = 120mA! Well over the mex limit. The clock has been running for over 2 years now with no problems.

Not the answer you're looking for? Browse other questions tagged arduino shift-register 7segmentdisplay or ask your own question.