Arduino-controlled slot car set - Why are my MOSFETs burning out?

I'm attempting to control the speed of a slot car using an Arduino and a MOSFET.

I'm new to MOSFETs, however, and while my setup works for a moment, eventually the MOSFETs (N-Channel) open up, and they no longer regulate the car's speed. 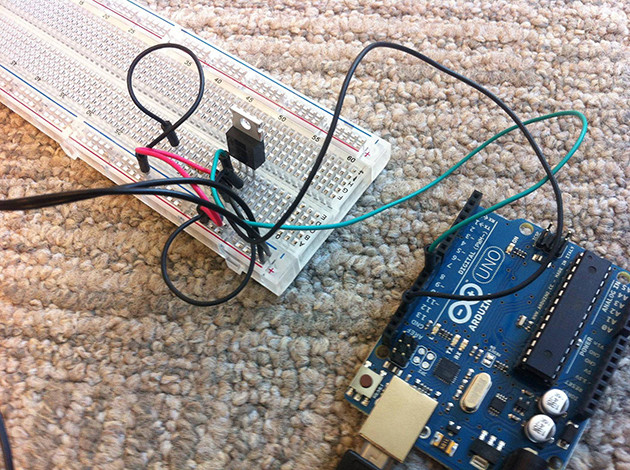 I'm using this slot car set and this MOSFET.

I'm able to fluctuate the speed of the car for a while, but eventually, the MOSFET goes out and no longer works. The slot car power supply is 17V DC.

Here are some more photos: http://imgur.com/a/iRL7D

What could be causing the MOSFET to burn out? The car flying off the tracks, maybe? Or, could it be heat? Would a heat sink attached to the MOSFET eliminate my problems? Do I have the right MOSFET?

I see a couple of things here; none directly obvious as the culprit.

What is the maximum current?

I think it is either:

All looks OK. Power feed cannot be seen in photos but presumably 17V is fed to track via controller and MOSFET is on negative side of load so actual V+ does not appear on breadboard.

Run a V+ lead to breadboard and connect a reverse diode from FET Drain (centre terminal) to V+, Cathode to V+ so diode is reverse biased usually. I know you show a diode across the tracks BUT having one at the FET elminates several possible errors and problems.

You risk blowing up your Arduino as is. MOSFETs can short drain to gate in some failures and insert 17V into your Arduino.

If control is PWM on/off this appears fine.

Is Arduino providing 3V or 5V gate drive?
3V is a bit low for those FETs but should be OK.

Under PWM the FET should not get more than barely warm.
How hot does it get?

You need an anti-parallel diode across the slot car. In other words, from V+ driving the car to the drain of the MOSFET. This is reverse biased, so it's not a short circuit when the FET is on. However, since the slot-car is an inductive load the current will need a place to go when the FET turns off. By adding this diode the current is able to recirculate through the motor instead for driving a huge voltage spike across the FET.

This is also equivalent to using a half-bridge where the high-side switch is replaced by this diode.

First of all, stop using cheap diodes like the 2n4001-4. DC motors can create high BEMF, due to load and frequency...I would get ultrafast switching diodes like mur2020. The heat could be cause from the gate not getting enough power. Check the spec on mosfet gate input...5 to 12v range. Mosfet need to be fully on, or off...If you have it half way on, it will create heating. This could be the main problem, but also a heat sink is needed when pulling amps...

6
Arduino-controlled slot cars - alternative to MOSFETs for speed control?
8
Why do I have to use the same ground?
0
GSM SIM-300 read msg problem
0
linear-control 12V DC fan with 5V low-current (Arduino)
3
Control Power Resistor with MOSFET
2
What is the conventional circuit to control a P-MOSFET with MCU?
1
Why do my mosfets keep breaking/ dont work?
22
Why am I cooking MOSFETs?
0
ESP32 destroyed by mosfet