In my circuit I am seeing strange behavior from my piezo. I am driving a 4Khz (TDK PS1240P02BT) piezo buzzer with a BSS138K N-channel logic-level enhancement FET. The PWM output of my microcontroller (PIC18) is connected directly to the gate of the transistor with a 100K Ohm pull-down also attached to the gate. The PS12 piezo has a 1K Ohm resistor in parallel just like the data sheet recommends. The voltage driving the piezo is 12V, and the gate voltage is 3.3V. 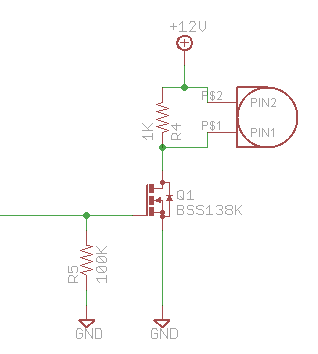 The issues I am seeing are dying transistors, piezo volume dropping during longer tones, and the piezo failing to work for a while after playing, and then working again after "resting" for a while.

I have a couple of questions:

Piezo elements can look quite inductive to the circuit. They can also produce high voltages from external shocks. Some barbecue lighters make a spark electrically by whacking a piezo, for example.

The problem is that either or both of these effects are causing high voltage which is frying your transistor. Make sure there are reverse diodes to ground and power to provide a safe path for any current that would otherwise cause a high voltage. Schottky diodes would be good in this case since they are fast and your voltages are low.

The first thing I would try is: add something between the CPU and the FET to convert the CPU digital output (0V and 3.3V, right?) to a higher voltage -- perhaps 0 to 5V; or 0 to 12 V -- and apply that higher voltage to the gate of the FET. Perhaps something like:

where I'd start with R1 as the recommended 1 KOhm, and R2 and R3 perhaps 100 Ohm. (There are other, more efficient piezo driver and FET driver circuits available. Many piezo drivers replace R3 with an inductor.).

The next thing I would check is the power supply. Ultrasonic piezos are notorious for pulling more power than people expect, dragging down the power lines, where the low power supply voltage causes CPU resets and other unexpected problems.

I have noticed piezo devices with the built-in oscillator driven by DC can be rated as low as 2~9Vdc. You however are driving it at 12Vdc and later 14.4Vdc +/-?

THese are probably driven at resonance in a classic Colpitts oscillator equivalent circuit. You however are NOT driving it at the recommended level which is Input voltage = 3V [Vo-p][Rectangular wave].

Now you know the piezo effect is reciprocal as suggested by Olin's BBQ starter. I don't profess to know the long term effect of DC on a crystal. I know there is a max spec= Maximum input voltage 30V 0-P max. [without DC bias.],which implies the maximum reduces "with DC bias" but is not stated what the maximum dc bias is.

My suggestion is send a detailed report to TDK tech support via your distributor to make sure it gets proper attention.

For best reliability for automotive needs, I would avoid DC bias. Best circuit to generate this is use two CMOS inverters to drive the device with inverted square waves and a 1K resistor in between. Use of Colpitts filter caps can combine the positive feedback resonant condition. With 10MΩ self biasing resistors in feedback for each inverter, you might be able to drive the device with zero dc and 24V p-p or 12V o-p at the self resonant fundamental frequency of 4KHz ( drifting to 5KHz) or if unlucky with buffered inverters get the overtone mode. :(

Impedance of the crystal can be obtained with a swept tone generator on a scope with a fixed resistor to measure current vs Voltage in X-Y mode. or use a time base with an envelope method of sweep for max peaks like below.

The reason your driver may be getting hot is the capacitive loading causes safe operating area (SOA) to be encroached by a high V*I transient power drop on the transistor which reduces the gain (gFS Forward Transconductance) with temp. , then it stops making sound and then it cools and recovers with a few minute time constant. How convenient alarm? cycling alarm ..ha.

Make sure the signal is a square wave on both inverters of my design. get rid of our Q1 with the ultra high speed voltage switch, you get ultra "high" current spikes. Ic=C dv/dt. You should be able to drive this off 2 CMOS inverters with 5V. Anything more and people may be putting tape over the hole.... :) 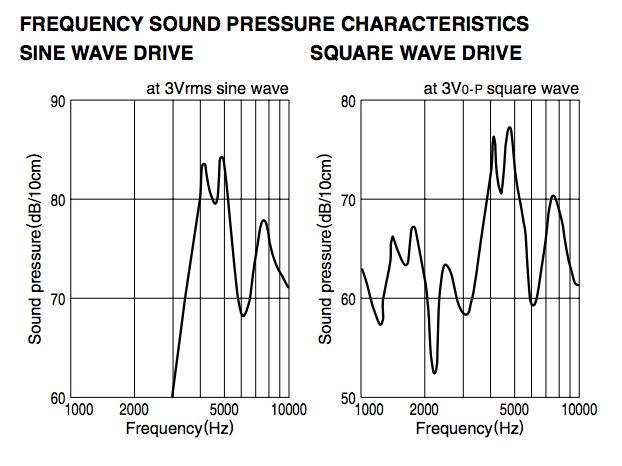 The entire driver schematic should be shown!, but my best advice is already given based on a few assumptions. If you really want to drive people out of the car.. drive it with a bang bang switch with inductor to get a high voltage spike or using step up auto transformer and get 30V o-p without dc bias. Consider 2 'HC04 drivers or equiv. YOu will need additional protection for automotive use.

Not the answer you're looking for? Browse other questions tagged transistors pwm piezo-buzzer or ask your own question.