DDR4 reportedly uses something called pseudo-open-drain-logic or PODL. How does it work?

Perhaps I can add a little simple information. As I understand it, POD (Pseudo Open Drain) drivers, have a strong pulldown strength but a weak pullup strength. A pure open-drain driver, by comparison, has no pullup strength except for leakage current; this is why the term "pseudo" is used. The remaining pullup strength is provided by parallel-terminating the receiver at the far end to the HIGH voltage, often using a switchable, on-die terminator instead of a separate resistor. The purpose of all this is to reduce the overall power demand compared to using both strong pullup and strong pulldown, as in drivers such as HSTL. DDR4 memory uses POD drivers, replacing push-pull drivers in DDR3 that drove strongly in both High and Low states.

You can get the standard from JEDEC (Free, registration required). It has single-ended master driving address and command bits. Each slave has a pull-up to VDDQ such that the parallel resistance is 60 ohms.

PSEUDO OPEN DRAIN (POD)
The output device is a MOSFET the output is called open drain and it functions in a similar way to "open collector" transistor switches. When open it appears like a charged capacitor & discharged when closed. So the memory state is sensed by voltage and not current.

Actual design details are proprietary and my opinions are hypothetical. Tony
Please vote on what you think of this entry 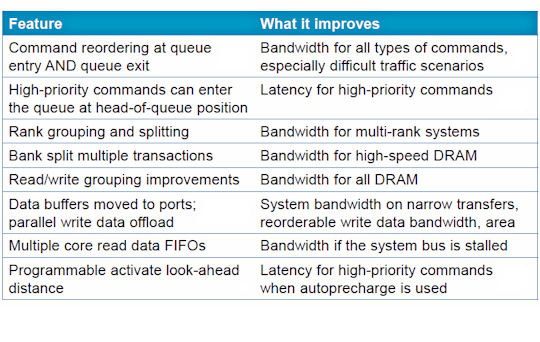 Now the DBI reduces the cross-talk of all these symbols being stuck at 0 or 1, so an extra bit can choose to invert the data when set to 1, like an odd parity or RLL encoding scheme to reduce ISI from consecutive all ones or zeros.

What's this stuff about PSEUDO? (I need Bob Pease to explain this in part 2... Bob are you reading this?)

The Pseudo hasn't changed too much, nor the POD concept, but the stuff to make it work at these speeds and size has made it more complex. There is another compatibility downside, it needs to run above a certain speed to work. Parity is no longer an option and is used on Addresses and CRC is used on data.

I forgot to mention DDR4 will actively queue memory fetches on a priority basis to improve performance. So SDRAM's are much more than just POD memory chips.

Not the answer you're looking for? Browse other questions tagged sdram or ask your own question.

9
Freezing DRAM for forensics (coldboot)
0
Sampling 133MHz bus with OWLS Logic Analyser
10
How does random memory access of RAM work?
6
Interfacing with RAM from a PC, e.g. SDRAM / DDR, to a microcontroller
7
How to implement memory mapped IO
1
Using 16bit SDRAM with 8bit bus?
1
DDR3 bank activation
1
Why is the WL charged at Vccp for DRAM cell?
0
How does a computer address ddr 4 sdram memory?