I am newbie to electronics. Basically I developed a mini circuit just to understand concept of electronic circuit. What I did was I developed a circuit with 3Volt AA battery and 1 LED. The LED lighted up. When I increased the number of LEDs to two, the second LEDs didn't light up.

So, I increase the number of battery so that it became 6Volt. The two LEDs light up fine. Then I added the third one, but only two light up and the third one didn't. Also I noticed that the brightness of the light is decreased when I add the third one.

For your information, I connected the LED in series. My question is, how can I determine the number of LEDs can be used for specific volt? I understand that LED is not a resistor, so why the volt dropped from LED to LED in series and how to determine this?

I did know the V=IR thingy. Thanks.

LEDs cause a pretty constant drop which, like Malife says, depends mainly on the LED's color, and also varies a bit with current. This chart shows you that all visible light LEDs require at least 1.8V. A red LED will drop about 2.2V, so like you saw it can be powered from a 3V battery. Two LEDs in series require at least 4.4V, so it won't work with the 3V battery, but the 6V is OK.

That three LEDs are weird. You say two light up faintly and the third doesn't. A LED's luminosity is determined by the current, and the same current passes through all LEDs so they should all three light evenly. The only explanations I can think of is that the third one may be defective, or it may be an IR LED. Though a LED which fails because of too much current will usually be open, not shorted. Also a shorted LED shouldn't decrease brightness.
LEDs are extremely sensitive to ESD, and that may have caused the dead LED. If you don't have any other ESD protective tools, touch a large metal object before handling your LEDs.

Now there's a big mistake in Malife's schematic, and that's the absence of a resistor. You'll have a difference in voltage between the LEDs and the battery. For the two LEDs that will be about 6V - 4.4V = 1.6V. You have to do something with that, if you connect the three just like that there might flow a very large current which can destroy your LEDs. So you place a resistor which will handle the 1.6V. Since you know Ohm's Law you can calculate the resistor's value if you know that a typical indicator LED needs 20mA:

For the single LED this would be 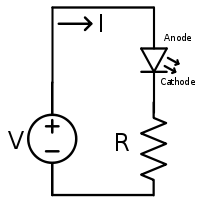 It doesn't matter in which order you place the LEDs and resistor.

If you haven't used a resistor in your experiments and the LEDs didn't go up in smoke it's probably because the battery can't supply too much current.

edit (after your comment)
Next to Ohm's Law there are also Kirchhoff's Laws: Kirchhoff's Voltage Law (KVL) and Kirchhoff's Current Law (KCL). KVL says that the sum of all voltages in a loop is zero. In our case, the battery's voltage is equal to the sum of the voltages over LEDS and resistor. (The voltage over a component is often called the voltage drop over it.)
In the schematic above we start with 3V at the top. The LED "drops" 2.2V, so the voltage at the cathode is 0.8V. There's only the resistor left before we arrive at 0V, so that 0.8V is the resistor's voltage drop.
For more than 1 LED start at the battery's positive contact and walk through the loop, subtracting voltages as you pass components, until you arrive at 0V when you return to the battery.

It really depends on the LED you are using. LED's Voltage drop vary from one part number to another and it is related to the LED's color . Regardless, it is always specified in the LED's data sheet. Typical ranges go from 1.8 to 3.3. Based on what you describe seems like you have something lower than 3 volts (since it does turn with 1 battery).

You can see in the following image I have a 3 volt-drop LED, if I power it with a 6V battery I have both LEDs light up. As I measure the voltage between the LEDs I read 3 Volts, as expected. 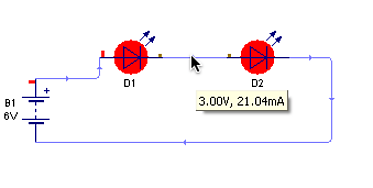 4
How to avoid/reduce heat for three 1W LED's?

0
How do I power 100 LEDs in series with low voltage?
0
led wont turn on in series circuit
3
How many ohms do you need before you need a resistor?
0
How many LED's can a TLC5940 16-Channel LED Driver power?
17
Why are LEDs in my home unaffected by voltage drop?
5
How can a DC18V ~ 36V LED driver work with DC3.6V LEDs without burning them out?
1
Use LEDs to indicate voltage
0
Why are LEDs so tolerant of voltage?