I try to build simple unitary push-pull amplifier which amplifies also DC. Here is a result of my work: 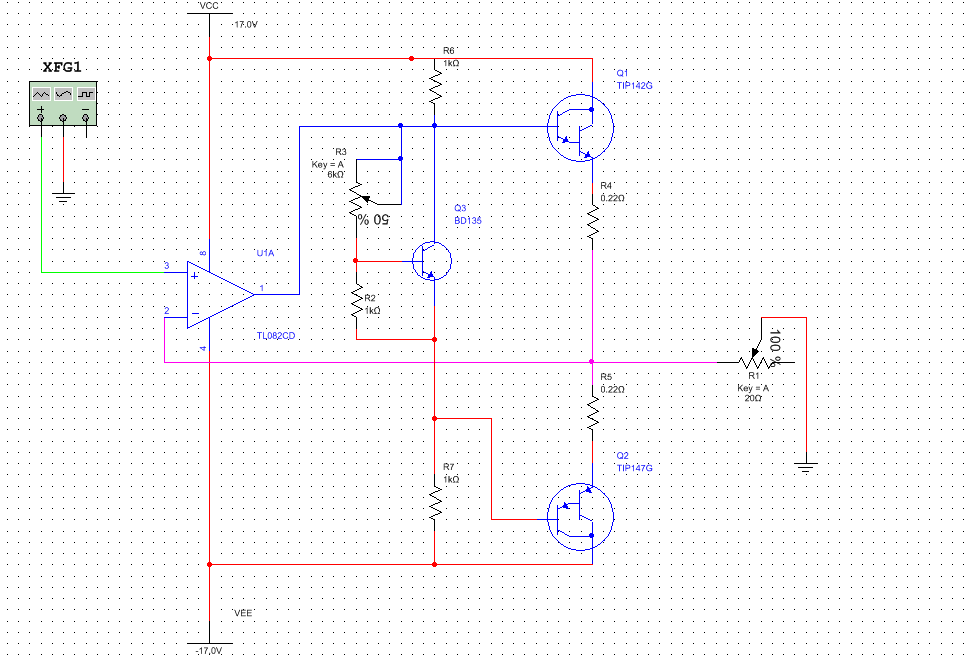 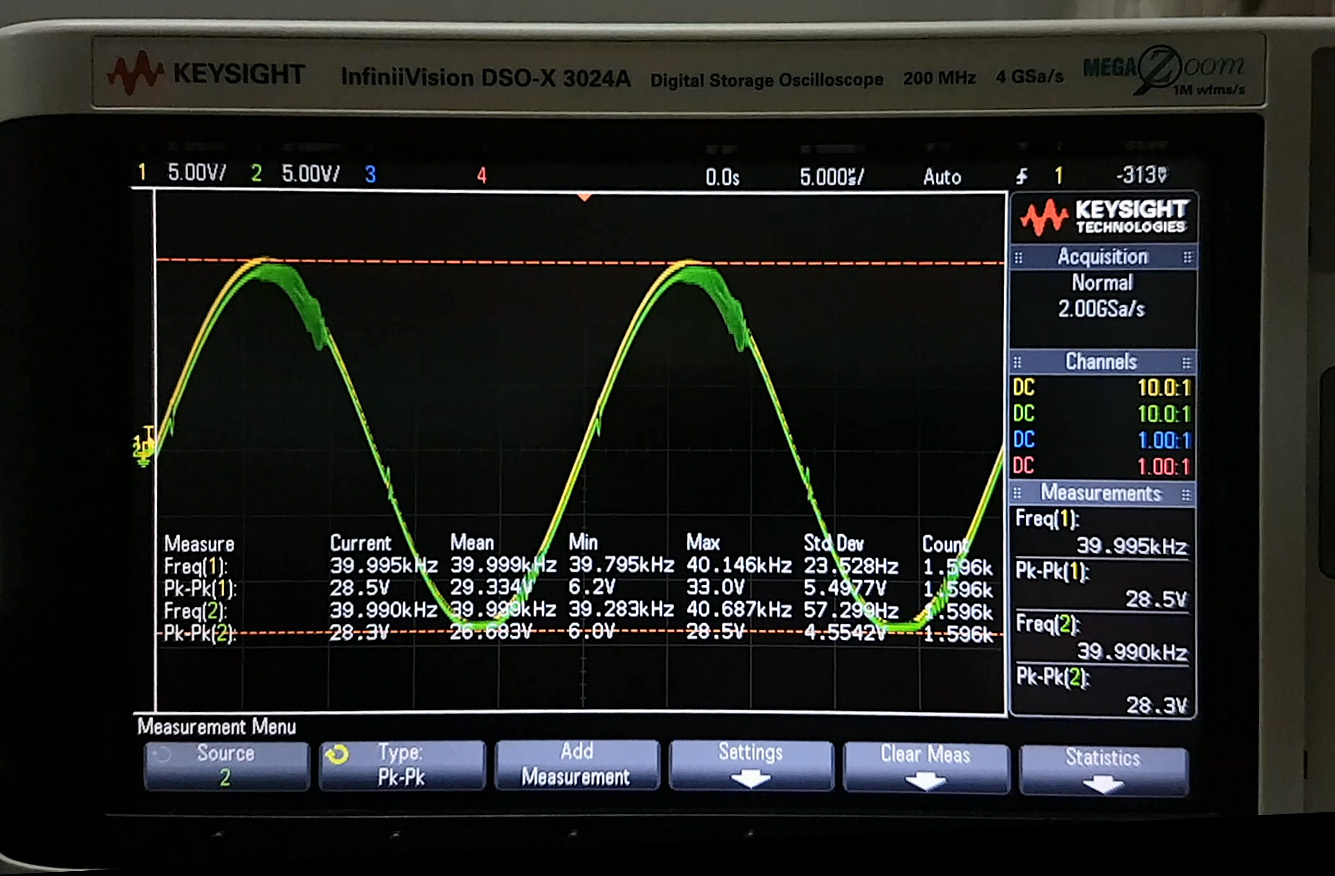 My idea to resolve the problem is to limit bandwidth of my circuit by using low pass filter. I found "simplified non-inverting amplifier filter circuit" on this site: http://www.electronics-tutorials.ws/filter/filter_5.html

Is this good approach to resolve my problem? Let me know: 1. Where in literature I can find information about especially this filter circuit? 2. Will this filter circuit work if I embrace in negative feedback loop also push-pull stage? 3. How to calculate the filter (the cutoff frequency and ensure unitary gain in passband).

Why I could't find much information about non-inverting amplifier filter in the Internet?

The first thing I note is that you have not used decoupling capacitors on the power rails of your op-amp and what can happen is this; the power rail drops cyclically with the output signal because of the load current and this causes the TL082 power rail to wobble up and down. That wobble inevitably finds it way to add (constructively) to the signal that you want to amplify. This can cause severe ringing and spurious oscillations and that is what I believe is the cause.

The ability of an op-amp to avoid this is called PSRR (power supply rejection ratio). 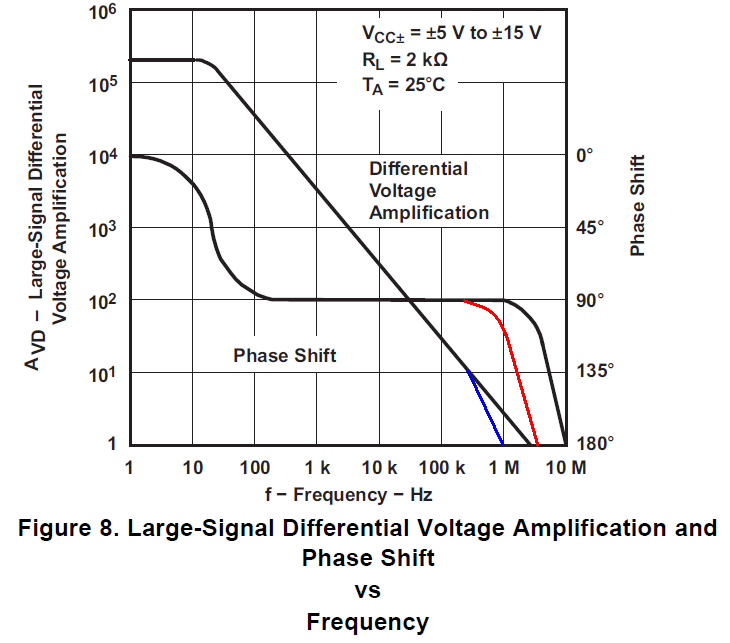 At about 200 kHz the phase (red) starts to be modified and this will tail off toward 180 degrees at a lower frequency than for the op-amp on its own. But the gain (blue) will also tail off and, as you should be able to see there should still be significant phase margin to avoid oscillation. Another clue is that oscillation appears to be bigger at the peaks of the waveform.

See Nyquist's stability criterion: at the frequency where the loop gain reaches 0dB, the entire loop phase shift must be lower than 180°. And a substantial margin of 45° is very desirable, so in practice it should not exceed 135°.

Your problem is that the output stage is slower than the opamp, so it introduces too much phase shift into the feedback loop. Also this particular opamp has a wimpy output stage, unable to source much current or drive the difficult load that a class-AB output stage presents. Also, its slew rate is low, so expect problems at crossover.

A quick fix would be to:

(note this output stage is different from yours, it is actually a simple current feedback amplifier with gain).

If you process DC signals, it will work. Now, for lower distortion on AC signals, I'd use a real audio amplifier output stage, with discrete transistors instead of darlingtons, and an opamp with a bit more output current ability than TL072.

If it fits the specs, it is much simpler to use an integrated power op amp like LM1875 or LM3886, these are foolproof, cheap, work very well, and you get output short circuit protection too! 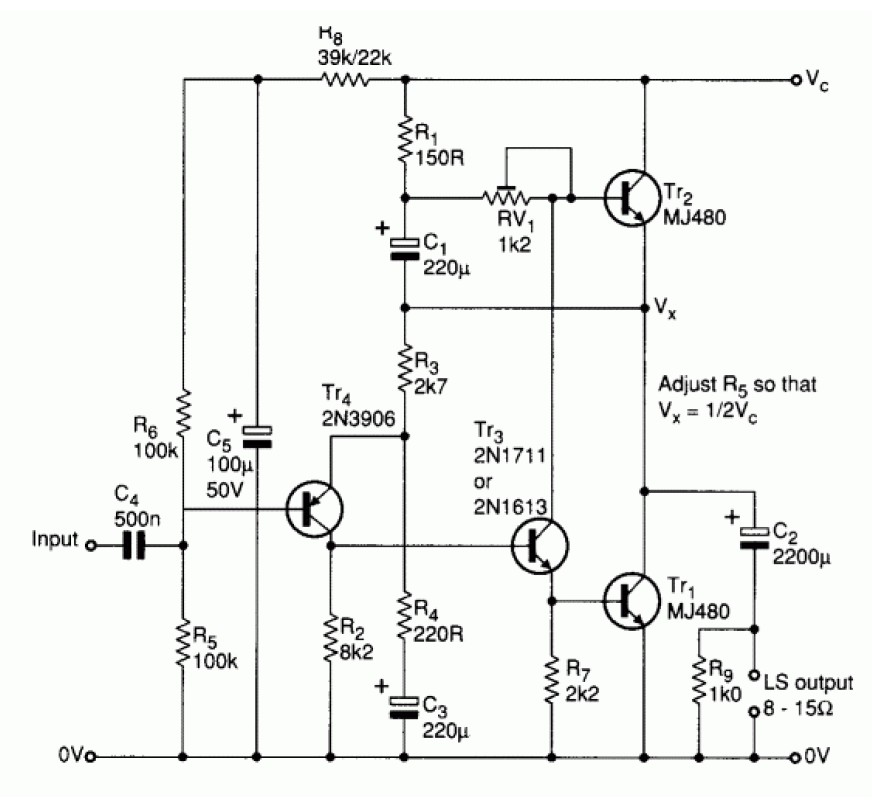 This one isn't bad for its age and simplicity, however...

You say it is "current feedback", well yeah, but the benefits of current feedback (ie speed) are only there when the output slews down! and Tr3 can conduct hard, pushing base current into Tr1. However if you attempt to slew in the other direction then Tr4 runs out of bias current and turns off. Tr3 turns off too.

And then you'll have to wait about... forever for the stored charge in Tr1's base to flow out through R7 which only pulls out a ludicrously low 300 µA or so.

Expect a generous amount of rail sticking on clipping, cross-conduction when coming out of clipping, and this can only run in class A since the amp is unable to turn off Tr1 fast enough to go through the crossover without humongous amounts of distortion.

Also, how is the bias set?

Guys let's be honest. It was good for its time, but now it is obsolete junk (unless you only do sawtooth with the fast edges going down...) ; LM3886 would beat this in pretty much any measurable way (and probably on sound too).

Run a simulation if you wanna have fun. I simmed a MOSFET variant a while ago, was quite fast but I had to use a 30mA pulldown on the gates... and it still had cross-conduction on clipping. Would've had to add drivers, then it's just as complex as another amp. Didn't even bother to build it. There are much better schematics.

the opamp you used may not be unity gain stable. the output transistors could be too slow. ...

think of the capacitor as a variable resistor whose resistance is frequency dependent. Set your gain so that the phase margin is sufficient at unity gain.

Not the answer you're looking for? Browse other questions tagged amplifier filter feedback low-pass push-pull or ask your own question.

2
Questions on Operational Amplifiers
5
Is it possible to make a non-inverting amplifier with positive feedback?
0
Push pull amplifier
5
Purpose of capacitors and extra resistors in the feedback of the inverting op amp?
8
Why does my electret microphone amplifying and filtering circuit output so much noise?
5
Calculating the cut off frequency of a filter circuit if you know all the component values
0
How exactly are the phase shift and cutoff frequency defined for a filter + amplifier circuit?
1
Inverting OpAmp with voltage divider in feedback loop