Need to amplify a square wave, 20 amps or so

I need to supply 4 MSD ignition coils with a square wave (normally unipolar) sine, triangle wave at 5v and amplify that signal up to say... 20A MAX.

Usually people use one or two darlingtons and the power is not sufficient.

I used 8 MJ11033's in parallel, which was sufficient, but I apparently didn't bias them right and they all burned eventually.

So what I'd like to do is just take advantage of the many amp boards offered on ebay such as http://www.ebay.com/itm/600W-High-power-Class-D-amplifier-switching-power-supply-board-DC-58V-/131947454104?hash=item1eb8ae5e98:g:HEIAAOSwwo1XeTiH.

Is there any reason this wouldn't work?

There's too many types of amplifiers out there; here's the basic idea 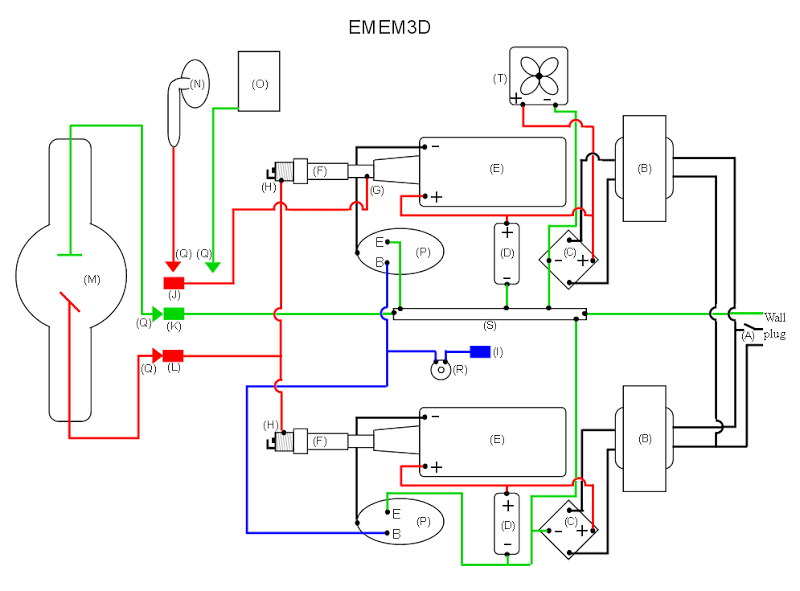 Thanks for the reply. Yeah that's all there is really to these, usually. If it helps here's a link to the coil specs I'm using- https://www.summitracing.com/int/parts/msd-5527/overview/make/ford/model/mustang , 4 in parallel, and an 8" phanotron plasma tube, I will be using one switchable vintage spark "tube" instead of the spark plugs. I just want to replace the darlington section with something that an engineer actually built. Will use any power supply that's required for the amp stage, not the transformers/rectifiers Again, the 8 MJ11032's in parallel that I tried were fine, they just didn't last. Hope that helps a little, and thanks again.

So this is a set of three different waveforms you need to amplify.

Problem is that square and triangular waves have theoretically infinite bandwidth. So, in reality, they are limited to some finite slew rate – you'll need to figure out what that is, but I'm pretty certain it's above audio frequency levels.

Is there any reason this wouldn't work?

Plenty. An amplifier is always bandwidth-limited, and especially a class-D amplifier only works by smoothing out a square wave until it doesn't look square anymore.

In other words: getting a set of MOSFETs to do the switching is exactly the right (and only) thing you should do if you need to amplify a square wave.

For a sine wave, things look drastically different. You need an amplifier with a linear in/output relationship – and at 5V/20A, ie. 100W, that's a pretty beefy amplifier. Looking at that ebay offer, there's positively no way imaginable the amplifier depicted comes close to 600W output power. Maybe 150W, or so. And that doesn't mean anything's sufficiently linear at 100W.

One problem might be(?) that I want to use a square wave, will the dc filtering remove this?

Possibly, but what's worse is that the output filter of that amplifier will never allow you to get sufficiently steep signal edges.

Does uni vs bipolar square make a difference?

Depends on how the wiring of your ignition actually looks like. The spark as is doesn't care, but in reality, the vehicle ground usually closes the circuit, so you typically can't choose an arbitrary virtual ground, and hence would need your amplifier or its power supply to generate a negative, 20A-average-capable supply – that's a hard job. So, I guess it's most likely you'd want to end up unipolar.

It's always "easiest" to switch something on and off – it's where transistors waste the least power. If you want to drive ignition coils, also, you typically want the highest \$\frac{d\,i(t)}{dt}\$ possible, so, you'd also want hard switching in that case, and not a sine wave or anything else. You're not trying to generate a high-voltage supply, you're trying to generate short sparks, so getting a nice smooth power transition from primary to secondary side in these transformers isn't at all what you want – I don't know, but I guess the transformers thermally aren't designed to continously transport power, but really just short impulses.

Your coil is a coil! Therefore, when your darlington transistor attempts to turn off, the coil will generate a voltage spike. This might be the reason why your transistors blow.

Let's have a look at the specs of your ignition coil...

Hmm, that's pretty low. An audio Class-D amplifier would expect a loudspeaker around 4-8 ohms, possibly down to 2 ohms if it's rated for it. A 4 ohm speaker would have around 2-3 ohms of DCResistance, but no speaker has a DCR of 0.4 ohms. Thus the amplifier will hit its maximum current limit long before delivering its peak power.

Can you wire the primaries in series while keeping the secondaries in parallel? This would increase the resistance, make the load easier on the amp.

Now, Marcus' concerns about speed are valid. However, you have to look at the primary inductance of your coil, and the actual switching speed you need.

To simplify things, if its inductance is higher than the filter inductor at the output of your class D amp, then the amp will be fast enough.

You can also check the sine frequency you want to drive into your coils: if they're much lower than the bandwidth of your audio amp, then it'll be fine.

You can also modify the output filter of your audio amp.

But as we saw, your problem is that the coil's resistance is too low compared to a loudspeaker, and this means you'd need an audio amp rated for your current.

If the waveform you need isn't "high fidelity", I'd just use a H-bridge driver like ADP3120, a pair of beefy NMOS, and PWM the thing.