I have a problem to understand how electromagnetic waves works. Why do transistors create EM waves when they're switching? And difference between antenna and transformer with secondary coil. When I have a antenna, the EM field is changing and electrons go forward and backward and the circuit with antenna isn't closed, so we can turn on a light bulb with two wires. Transformer uses also AC, so why does the circuit need to be closed to flow current?

Also see... Why is an inductor not a good antenna?

So, an inductor or transformer recovers 100% of the magnetic field whenever the current falls to zero ...but a loop antenna only recovers a smaller percent of the field, while the rest gets radiated as waves.

Here's an simulation of an inductor being driven with AC, from an EM physics course at MIT. The inductor in the video is microscopic, and located in the center of the screen. Its magnetic field expands and contracts, with all the magnetic energy being recovered during each inwards cycle: 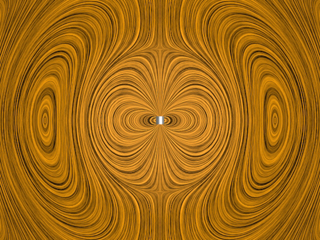 Above is the inductor, while here below is their simulation of a loop antenna. Only part of the field gets drawn back into the inductor. Some of it escapes and flies away:

Finally, here's the field-pattern for a pure antenna. The "nearfield" zone with it's expanding/contracting pattern, that part is tiny, and down in the center. The surrounding "far field" shows the radiated EM waves.

MIT 8.02 course also has a simulation of an inductor where the current suddenly changes to a higher value. The magnetic field pattern enlargers, and also a transient-wave of pulsed EM gets launched:

What's the difference between a loop antenna and an inductor? A loop antenna is physically large compared to the lightspeed delay, and to the AC wavelength. When its usual fields start acting like waves moving across the antenna, then it loses the ability to "pull in" the whole field-pattern. Inductors are different; they're microscopic when compared to the EM waves. That means their fields can all change together at the same time, with no waves involved. They can "pull in" the entire field as a whole.

Of course all inductors leak a little bit. For this reason even the smallest inductor can become a transmitting antenna. Just give it a million times higher current than would be needed by an electrically-large loop antenna having a quarter-wave diameter.

I have a problem to understand how electromagnetic waves works

Most people do including me.

Why do transistors create EM waves when they're switching?

And difference between antenna and transformer with secondary coil.

An antenna converts the impedance of an electrical signal to an impedance compatible with space (i.e. 377 ohms in a vacuum). It also acts as an interface between a cable and space allowing most of the electrical power to be passed into space as an EM wave (also a power).

When I have a antenna, the EM field is changing and electrons go forward and backward and the circuit with antenna isn't closed, so we can turn on a light bulb with two wires.

When you transmit an EM wave, it is real power and when you receive it you receive power so it could, in principle, turn on a lamp. Think of it like a powerful LED - it transmits light in most directions. That light is actual power. Think of a solar panel - it receives that power and turns it into electricity.

Light IS an electromagnetic wave.

Transformer uses also AC, so why does the circuit need to be closed to flow current?

Because it doesn't seek to turn electricity into an EM wave. If it did then there would be considerable losses involved and we would have long ago exhausted our currently diminishing hydrocarbon resources. Think about how you would harvest all the power produced by that LED I mentioned - you would need to totally surround that device with solar panels. LED efficiency might be 40%. Solar panel efficiency is about 20%. All this means big losses for witreless power transfer.

The above link tries to answer how the antenna radiates with the simple analogy to clapping our hands. This might help you.

Not the answer you're looking for? Browse other questions tagged transistors transformer antenna electromagnetism electron or ask your own question.

33
Why is an inductor not a good antenna?
0
Electric field internsity of RFID loop antenna

0
Short-circuit primary side of a transformer to collect all the spikes at the secondary
2
Dipole antenna VS. coil for RF transmission or recieving
10
Does current flow on an open transmission line?
0
Can we make a simple wireless device by mutual induction phenomenon
0
How does the secondary coil of a transformer affect the primary coil? How is it in case of Step-up and step-down transformer? Does it obey Lenz's law?
0
Mutual Induction in Transformer
0
Lenz's law and the magnitude of opposing fields
0
Voltage induced in aircraft high-tension magneto ignition system
2
How does an antenna tune in a particular frequency on the receiver side?