After a lot of theoretical studying of MOSFETs, I decided to try out at least the basics of it in practice.

Here is the first circuit I ever made using MOSFET: 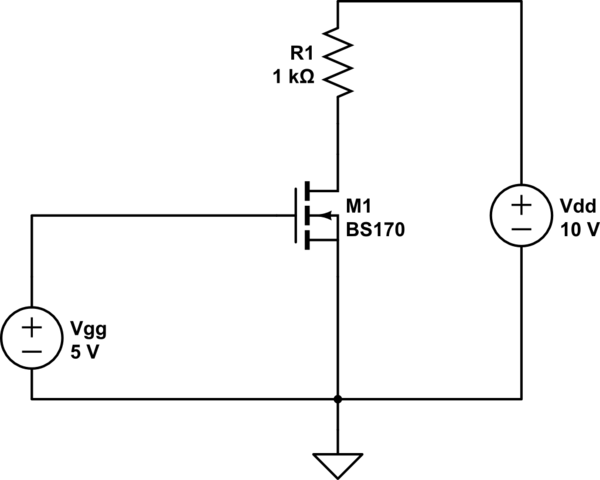 I haven't used resistor in series with gate, because MOSFET is obviously voltage driven component (input gate current is negligible).

I chosen next parameters for the circuit:

Then I didn't really knew which way to calculate Vgs (since the actual gate current can't be really calculated), so I tried next:

After I made the circuit on breadboard, this are the values I got with measurement:

Where did I go wrong on this one?

You should look more closely at the data sheet. Go to page 2, and about the 3rd item is gate threshold voltage. This is defined as the gate drive necessary to produce 1 ma drain current, and is specified to be in the range of 0.8 to 3 volts, with a typical 2.0.

In your breadboard circuit, in order to get Vcc/2 (5 volts) at the drain, you need 5 mA of drain current. Since a typical current at 2 volts is 1 mA, 5 mA at 2.4 volts seems perfectly reasonable. At voltages much below this the drain current will be right up next to 10 volts, since there is no current being drawn, and for much greater voltage the FET will be turned on hard and Vd will be near zero.

The only thing you really did wrong was computing gm. You seem to lost sight of the fact that this is your desired gm, not what you can actually expect. Go back to the data sheet, and you'll only find one gm value, specifically 0.2. However, notice the operating conditions - Vg is 10 volts and id is 250 mA, which is far, far away from the actual conditions you provided, so you can't trust it for what you were doing.

Where did I go wrong on this one?

There seems to be several flaws in your understanding of a MOSFET's operation. gm is not equal to Id/Vgs as you noted(you have a typo there saying it is Vds but I think you didn't mean Vds).

The transconductance of a MOSFET is equal to 2*Id/Vov, only when the MOSFET is in saturation. Vov is Vgs-Vth, where Vth is the threshold voltage. In the three cases that you have breadboarded, you might have put the mosfet in any of these three regions of operation, viz. sub threshold, linear and saturation (need to actually solve equations to see which region it is in: check here)

At a high level, when VGS is greater than Vth, the larger the VGS you put in, the more current you make the MOSFET sink. This current flows across the 1kΩ resistor and therefore, the VDS drops as current increases, as VDD is fixed. So what you are seeing is sane.

You seem to be concerned with input current to MOSFET. But in most cases, it is safe to assume this current to be zero(unless the MOSFET is a leaky cheapo). This zero input current is what gives MOSFETS >100 MΩ-s(frequently >1GΩ) of input impedance as compared to BJTs.

You already have the correct answers here but I would also like to add.

I haven't used resistor in series with gate, because MOSFET is obviously voltage driven component (input gate current is negligible).

In reality, MOSFET devices have significant effective capacitances on the gate as shown below. As such, when turning them on and off there is a finite charge which must be applied or removed during that turn on or off time. This results in a transient currents (and voltages) which, if not limited, can destroy whatever is driving the gate. A gate resistor is therefore almost always required. 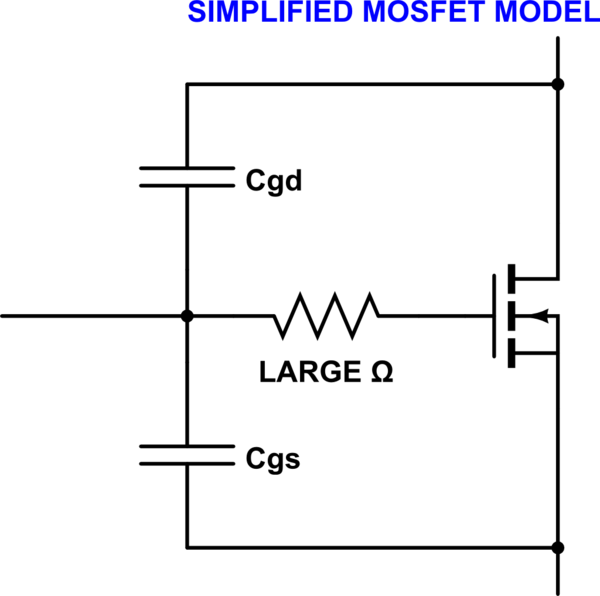 The size of the resistor is dependent on the maximum current the driving device can source or sink as well as the drain and source voltages applied to the device.

When used as a simple low frequency on off-switch, this resistor can be fairly large.

However, when used in a high frequency switching application you will want the resistor as small as possible so as to limit the effect on the charge time, and consequent switching time, of the MOSFET whilst still protecting the driver.

It should also be noted that in high frequency switching applications this charge/discharge current requirement can produce significant power to be dissipated in the driving gate as well as the gate resistor.

Not the answer you're looking for? Browse other questions tagged mosfet biasing transconductance or ask your own question.