what really is negative voltage in ELECTRON AND HOLE TERMS?

I learn by visualizing ideas and have a problem visualizing ac or dc negative voltage- what happens? for ac, do the electrons reverse direction? for dc, what happens? why dont we have simple textbooks answering these things in plain English? with diagrams to booth? i have read a couple of answers about this but it doesn't help when trying to visualize these terms. please forgive my insistence, but i do not want an analogy, i want a straight , dumb answer. again my apology for insisting, but i do not want analogies, i want an answer in electron and Hole terms.

someone edited the question while i was away and removed the key part mistakenly- the most important part for me is the fact about what is physically going on, not an analogy, i dont want to imagine it like something else, i want to imagine it as it is in real life.

In order to understand this you have to think about how atoms work. Atoms consist of a "positively" charged core surrounded "layers" of negatively charged electrons. Normally, this is balanced and the amount of electron charge equals the nucleus charge. 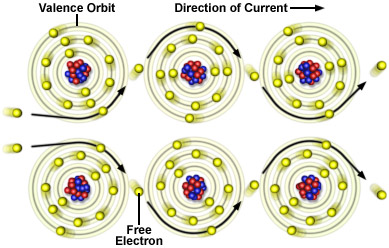 The electrons then move in a kind of chain through the entire circuit path.

Notice I said an electron is driven to the next atom. This effectively leaves a "hole" in the outer layer of that atom and the atom will become positively charged.

Now you can think of it as cars lines up in a traffic jam on the highway. As one car moves forward it leaves a gap behind it. The car behind fills that gap and the gap seems to move in the opposite direction to the traffic back down the traffic jam. This is the same as what we call hole migration in a conductor. Note nothing is actually moving, it's the absence of something that moves.

If you apply an AC electric field to the conductor, the electrons do indeed move forwards and backwards as you imagine.

I think the simplest way to visualize voltage is to imagine two metal plates (like a capacitor's) that are in outer space and separated by some distance, \$d=10\:\textrm{m}\$. Label the plates \$A\$ and \$B\$. You place a voltage source across the two plates. Let's say this is \$V=10\:\textrm{V}\$.

I need to point out that when I say that \$A\$ is the positive plate, I only mean that it is positive with respect to \$B\$. Not plate \$C\$. In fact, with this above arrangement using a voltage source across plates \$A\$ and \$B\$, there is no particular way to say what the voltage of \$C\$ is. It's not connected to anything and is just floating out there in space and could have any arbitrary voltage with respect to either of the other two plates. It's "unknown." But because we've applied a voltage source to \$A\$ and \$B\$, we do know the voltage between those two plates.

Now. Let's take one Coulomb of electrons and magically place them right next to (but not precisely touching) the surface of plate \$B\$ that faces plate \$A\$ (in short, in between the two plates but at plate \$B\$) with an initial velocity (relate to both of these plates) of zero. These electrons will be repelled by \$B\$ and attracted to plate \$A\$ and will start to move towards plate \$A\$. This force accelerates the Coulomb's worth of electrons (a specific number you can look up) and their velocity increases until they finally impact plate \$A\$. (Not unlike an asteroid impacting the moon.)

A certain amount of energy will be related to this impact. In this case, the energy will be exactly \$10\:\textrm{J}\$ (Joules.) This is because a Volt just happens to be one Joule per Coulomb. Since we released one Coulomb and subjected it to the acceleration of ten Volts, there will be ten Joules of energy due to the impact.

Voltage is always measured between two points. In between those points, there is an electric field strength. Sometimes, this field strength is uniform (as it is in the above example.) Sometimes, it varies (in which case the acceleration of the electrons would have varied as well during their travel time.)

Another way to look at the above example, turning it "inside out" in a sense, is to ignore the voltage source that I applied for a moment and to instead just think about the Coulomb of electrons themselves as they traveled from \$B\$ to \$A\$. In the set up I gave, there was a uniform (constant) acceleration they experienced throughout their travel time. Each moment, the electrons moved from one point in space to another and still felt the same acceleration there, as well. So you can imagine that there are an infinite number of points along their travel and that there was an "accelerating" field at each point that continued to push them along, the same as before. Think of each of these points in space as possessing an "electric field strength" (or arrow) that points in some direction (from one of the plates to the other, in this case.) And that the electrons "follow" that arrow, moving to a new point, where a new "arrow" points them again. etc.

Looked at this way, the voltage between two points is really just the sum of all these arrows that exist in between the two plates. It has nothing really to do with the plates themselves, but about the field strength in the space that exists between the plates.

Oh, well. We're stuck with it.

Physicists consider the voltage (if positive) to be the work required to move a positive charge against the electric field. In other words, rather than just letting the charge move with the field to "impact" on the other side, they want to know how much work it takes to go the other way -- the work needed to move a charge against each and every electric field strength "arrow" as they move a charge from one place to another. If it takes work to do that, they consider it "positive." If it gives work to do that, they consider it negative. (This is just book-keeping to let you know if energy is released or required.)

So, the potential of \$B\$ with respect to \$A\$ is the work done against that field in between the two plates, when taking a positive charge from \$A\$ to \$B\$:

This can also be written as:

where \$\mathscr{E}_x\$ is the electric field strength at each point in space between the two plates.

That's a mathy way of saying everything else I said before. Also, the above is all "linear." But it has the same meaning in 3D space, except that now you have more coordinates and the little pointing electric field arrow can point in any direction along the way. So the path of the electron(s) (or positively charged ions) can follow a crazy-looking path at times. (A corkscrew path isn't uncommon!)

As far as knowing what is the ultimate reality of what is physically happening in the universe? None of us knows. We have models. Some models work well at one level of consideration and work terribly at another. (Newtonion mechanics works good here on Earth, but terribly when velocities are near the speed of light.) We have atomic models, "electrons as a gas" models, etc. But the absolute physical reality is still a work in progress. Frankly, I don't believe we will ever really know what it is. But we will have better models and they will continue to improve their reach into new situations.

Not the answer you're looking for? Browse other questions tagged electricity or ask your own question.

26
Is voltage the speed of electrons?
-1
Relationship between potential in batteries and zero potential at infinity

18
Why do computer graphic cards use 8 pin (4 positive and 4 negative wires) connector instead of connector with only single positive and negative wire?
4
Confusion about conventional current and electron flow and how it runs through and powers a circuit
1
Does these terms consider the same Voltage, electric potential, and potential difference
6
What is negative current?
0
Electric potential Vss (negative) in Diodes, Mosfets and BJTs
14
What, exactly, is voltage?
1
What is the relationship between Power Generated in the grid and Voltage delivered?