How does this telephone circuit modulate the current?

I've been reading on how old landline telephones work (POTS, as they call it) and found out it's quite a bit more involved than I had expected.

This circuit comes from the wikipedia article "Telephone", and I have a few questions. 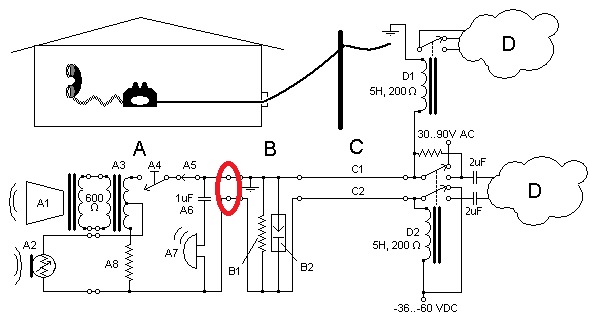 First, what I've got so far. Please tell me if I got anything wrong:

With that in mind, I'm trying to understand how this circuit works. I have a few questions:

These are all the questions I can think of right know. I will update if I think of anything else.

There is a pretty high DC voltage (48 V) between both wires (called tip and ring). I still ... don't know which one is connected to ground, if tip or ring.

The ring is about -48 volts with respect to earth ground (just remember the phone system emergency power is the equivalent to 4 car batteries and you will easily remember this voltage). The tip is about zero volts with respect to earth ground. By the way (BTW), this is the on-hook voltage. As soon as you go off-hook the voltage drops as tip and ring now carry sounds (dial tone).

The voices are modulated on the AC current, not on the voltage...

If you have voltage and a load you have current. They are all related:

...so both current and voltage change when a voice is being sent over tip and ring.

Phone audio is sampled at 8K bytes per second so the upper frequency cut-off is 4KHz. Nothing higher gets through a normal phone connection.

the impedance of the speaker should be fairly resistive ...

As said before, if you measured both the voltage between tip and ring and the current through tip and ring you will find both are changing according to the audio being sent over the tip and ring.

You get feedback on the speaker, right? The microphone signal goes through the transformer... so that the outgoing signal doesn't overpower the incoming signal...

A2 is the microphone, represented as a variable resistance, which I don't understand...

The off-hook voltage is about 3 to 9 volts. This is supplied by the phone company. Old phone microphones were made using carbon and would change resistance when air pressure waves hit the diaphragm. Again, as the resistance changes so does the voltage and current as given by the equation:

...most modern phones use electric microphones, which just generate a small voltage proportional to the sound pressure. How is this implemented on a modern phone? ...

What are the typical amplitudes of the AC currents?

Assuming you are referring to the ringer signal, it is about 90 volts at 20Hz.

Not the answer you're looking for? Browse other questions tagged circuit-analysis transformer analog modulation telephone or ask your own question.

13
Control the hardware of an old phone using a Raspberry PI
2
How does this direct digital synthesis accumulator work?
1
How would you increase voltage to drive an LED yet also keep it limited?
1
Increased current draw in data transmission circuit
1
What is the use of R5, C4, C2, R6, R5, D1 in the below amplitude modulation circuit?
4
Extracting speaker, microphone and hook signals from a two-line telephone