Neutral and the earth are bonded at the main panel or the substation but why is only earth wire used for safety?

Typical distribution system can be illustrated as:

Here are my premises (and assumptions):

1-) Chassis in a house must be connected to the earth, not to the neutral.

2-) The earth and the neutral are connected together at the substation.

Imagine one lives in a house and there is no earth in the outlet. I have seen such apartments and never understood how they are allowed to wire houses like that.

Including this web-site, I encountered similar questions (so this might be duplicate but the reason is I didn't comprehend the given answers such as this one) but never understood one thing. And here is my question:

Is there an "easy" example showing the fact that connecting the neutral to chassis is a bad idea? An illustration of a scenario helps a lot.

As others have mentioned primary reason is earth/ground line is a backup line separate from the neutral line to provide two fault protection.

That is, more than one thing needs to fail. For a grounded chassis device the chassis can become live only if two (or three faults occur).

There is actually a single fault case too though.. "Earth pin is wired to live at the outlet..." but there is nothing you can do about that one...

Also, under normal circumstances the earth line should have zero current flowing through it. That is quite different from the neutral line that can have 10s of amps running though it which can produce significant voltage drops at various points along the conductor. The ground line "SHOULD" be at zero potential everywhere.

By the way, the wiring you show for House#1 is not legal in these parts. A separate ground is required at the residence, usually clamped onto the incoming water line if it is a metal pipe, or to a long ground spike. Neutral may or may not be tied to this ground at the fuse box. This provides better local protection as opposed to relying on the electric company and the integrity of the service which may get disrupted (torn down) during a storm.

Is there an "easy" example showing the fact that connecting the neutral to chassis is a bad idea?

Yes, it is unfortunately very easy and common for bad wiring to exist where line and neutral are reversed at the outlet. Most appliances don't care, but if you plug your device with the neutral tied to the chassis into such an outlet.. well you can figure out the rest.

Further there is the broken neutral line scenario which can also be quite lethal. Consider the drawing below. 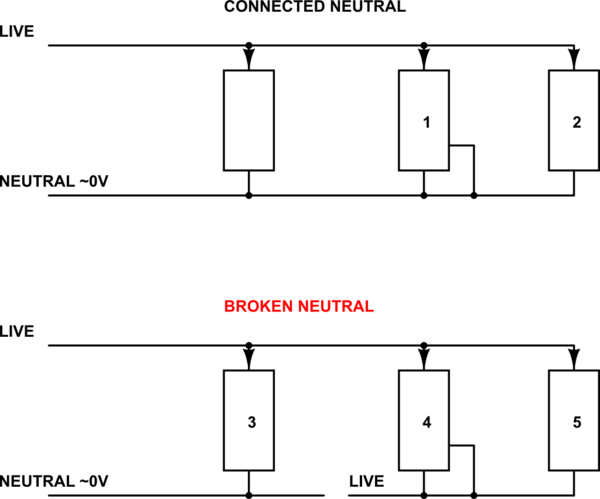 Lets assume appliance 4 used the neutral to ground the chassis. Since neutral does not actually go anywhere the chassis is really floating.

However, what happens when you turn on appliance 5. The neutral line coming out of appliance 5 is then pulled up to the live rail. Appliance 4s chassis will also become live. Appliance 5 could be in another room on the other side of the house...

Imagine one lives in a house and there is no earth in the outlet. I have seen such apartments and never understood how they are allowed to wire houses like that.

Standards vary around the world and age makes a big difference. People seem to forget that residential electricity is a relatively new phenomenon. In the early days things were A LOT more dangerous. It is only through time that we have developed more common and safer standards. Though, as I hinted, some parts of the world are still rather lagging due to the costs to replace everything... Canada/USA for instance, where you can still stick a plug into an outlet while touching the live pin....

I have seen such apartments and never understood how they are allowed to wire houses like that.

They are not allowed to, and haven't been for ~50 years (in my jurisdiction), but many houses are more than 50 years old.

Is there an "easy" example showing the fact that connecting the neutral to chassis is a bad idea?

Just as an example, if the neutral wire returning to the panel gets broken, you'd get return current going back through the ground wire and not notice the fault. Then when another fault happens (broken ground wire), you would end up with a hot chassis.

A fundamental principle of safety is that a single "plausible" failure should not in and of itself create an immediately-dangerous condition. If the case of a device is attached to the panel ground via one route (the groundING conductor) and the power that flows through the device returns to the panel via a different route (the neutral, groundED conductor), it will not be possible for a dangerous voltage to appear on the case unless one failure causes a something to be connected to the case that shouldn't be, and another failure causes the case not to be connected to ground.

If a proper groundING conductor is not available at an outlet, danger may be minimized by installing a device which in the US is called a Ground Fault Circuit Interruptor (GFCI) and in other countries is called a Residual Current Detector. When an electrical device is working normally, almost all of the current that flows through the hot conductor will return to the panel exclusively through the neutral conductor. Most electrical-shock scenarios, by contrast, involve current which flows out through the hot wire but returns to the panel through another path. A GFCI senses the difference between the amount of current flowing in the hot and neutral wires, and will break the circuit within about 1/50 of a second if they don't balance. If a fault would cause the case of a device to be erroneously connected to "hot", that might not trip a GFCI if no current flows, but if someone were to touch the case while it was live, a GFCI would likely trip fast enough to prevent the resulting shock from being lethal. Not a wonderful situation, to be sure, but a less dangerous situation than would exist with no protection.

I wrote the linked answer. Here's a variation of the illustrations in that answer.

Figure 1. Device has had neutral wire connected to chassis.

I have added a fault to the wiring. The neutral cable is broken.

Now consider what happens when someone switches the light on. The top of the bulb goes live as does the bottom and the chassis. This is an electrocution risk.

Even when the neutral is OK there is still a problem. With normal currents flowing there will be a voltage drop along the neutral cable meaning that the chassis will be several volts above ground. Touching the chassis and a properly earthed device or steel sink / plumbing will cause a current to flow through the body. Again, this is potentially fatal.

But now do the same thing with the usual case i.e. with the chassis properly connected to the earth. Now in proper case imagine the live touches to the chassis; and imagine also now the earth wire is broken. Now we have the same situation in your first example. What's the difference?

In industry in Europe it is a requirement to test earthing periodically on certain equipment. For example, the PAT (portable electrical test) units will test earth continuity and insulation. These periodic tests are designed to catch the missing / broken earth fault before a second fault can cause a problem.

Not the answer you're looking for? Browse other questions tagged safety earth neutral or ask your own question.

38
Why don't we use neutral wire for to ground devices and earth wire for closing the circuit?

10
Why is chassis connected to earth ground but not neutral?
3
Strange Earth Voltage Reading
38
Why don't we use neutral wire for to ground devices and earth wire for closing the circuit?
5
Safety of designing / using a plug that connects between two different wall outlets for increased voltage?
1
Question on Ground/Neutral connection for a 220V equipment
3
Earth Ground Portable Generator
2
Limits to use an off-the-shelf grounded AC-DC power supply with a two-prong cable
3
Why is there not lots of current flowing on a house’s grounding electrode?
6
What are the drawbacks of connecting circuit GND and Chassis via multiple mounting screws (for EMC and Safety)?