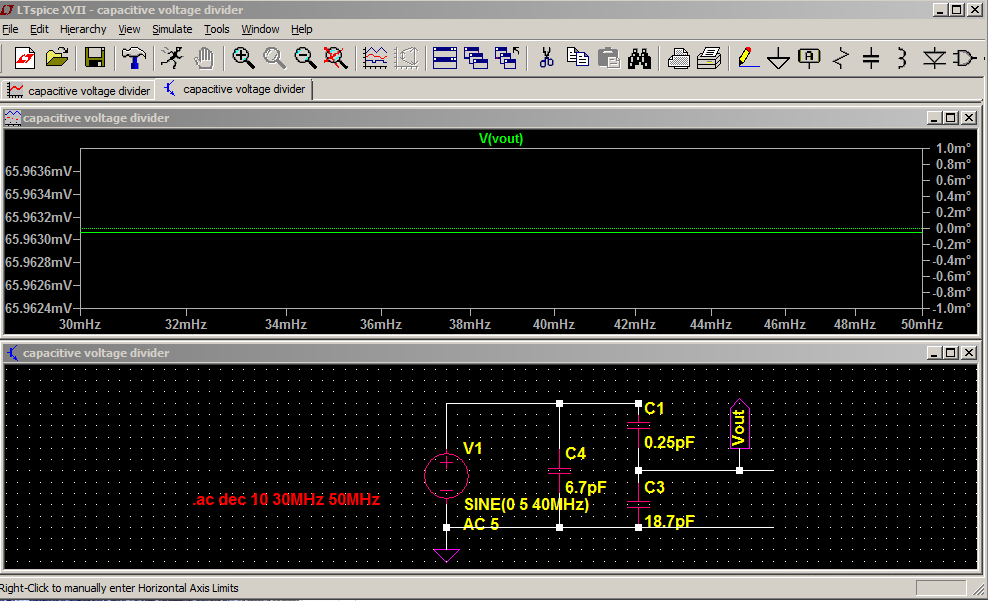 Question: Why is my measurement of the output voltage of my capacitor voltage divider not matching the theory? Is there some parasitic capacitance or some problem with my measurement technique that I am not taking into account? Thanks for the help.

A problem is that LTSpice doesn't like "MHz" for what you think. Instead, LTSpice thinks you meant milliHertz, when you wrote it out that way.

So you need to change that to read "40Meg", instead. That will help you with LTSpice, anyway.

Regarding syntax here, you can use Mathjax (I think it's called that.) Or, at least, the version of it they support here. You use either "\\$" to bracket an in-line equation, or "$$" to bracket a block equation.

See this link: MathJax basic tutorial and quick reference for some good info to try out.

Regarding your scope measurement, I don't know. I think you are saying that you are measuring way more than you expect. Is that correct?

Is this on a solderless breadboard? If so, there is capacitance there (significant enough in your case, as I've seen figures in the several pF range) and it may be affecting \$Z_1\$ far more than \$Z_3\$.

Assuming you chose a frequency that is high enough to avoid the loading effects of the 10 Mohm resistor you hit the next problem and that is the input capacitance of your scope probe.

13 pF in parallel with 18.7 pF is going to wreck your measurements but in the wrong direction so I have to assume that the 0.25 pF capacitor feeding the 18 pF is badly affected by parasitic capacitance in your set-up.

0.25 pF is round about the self capacitance of an 0805 surface mount component and it's really easy to add another 0.5 pF just by not paying attention to how you build things.

Not the answer you're looking for? Browse other questions tagged voltage-divider voltage-measurement parasitic-capacitance or ask your own question.