I am trying to match a gsm antena, doing it on a pcb, first time in practice. I understand the whole process to adapt it, I've done it in simulators. However, I don't understand the need for a pi matching network, since (theoretically) and LC circuit is enough, or a series and shunt capacitors. So why the extra component?

Plus, I understand even less the suggested pi matching network on the uC datasheet. It shows 2 shunt capacitors with a normally 0-ohm resistor in between. Aren't the capacitors redundant?

I forgot to add: I'm going to do this with a vna, the configuration I have is the antenna pin from the uC directly connected to the matching network and then the antenna. Should I do this with the uC powered or turned off. 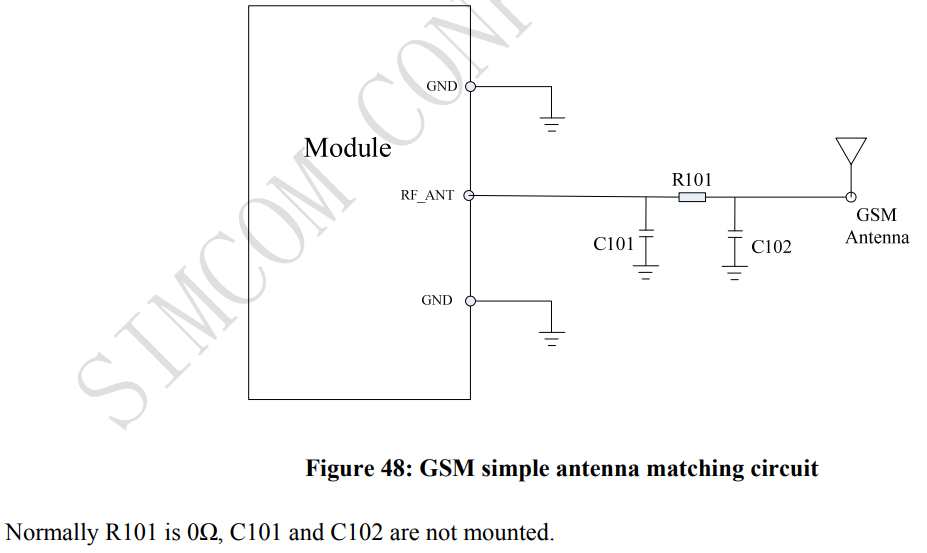 However, I don't understand the need for a pi matching network, since (theoretically) and LC circuit is enough, or a series and shunt capacitors. So why the extra component?

Think about what a simple inductor and capacitor provide regarding the input impedance. At resonance, the impedance looking into the LC network from the chips point of view is resistive because at resonance the phase angle is 0 degrees. However, from the perspective of the antenna it doesn't see a resistive impedance and this will be critical for a lot of antennas.

So, the network is designed to look resistive in both directions and, as a result, it doesn't quite run at resonance. The extra capacitor makes the network symmetrical so therefore, for the sake of impedance phase angles, it only needs to be analysed in one direction.

That extra capacitor (from the perspective of the chip or the antenna) turns the off-tuned LC (that now looks more inductive than resistive) into an impedance that looks purely resistive. This is because that extra capacitor is like power factor correction. In fact it IS power factor correction if you look into it. It looks resistive both ways providing you design the values to suit the operating frequency, the antenna impedance and the chip's output impedance.

Regarding the suggested pi network, those components can be fitted by you (the user) to suit the particular antenna you choose.

Key to understanding PI networks is the circulating current ---- its the same current in both capacitors, but you get to pick the capacitors. 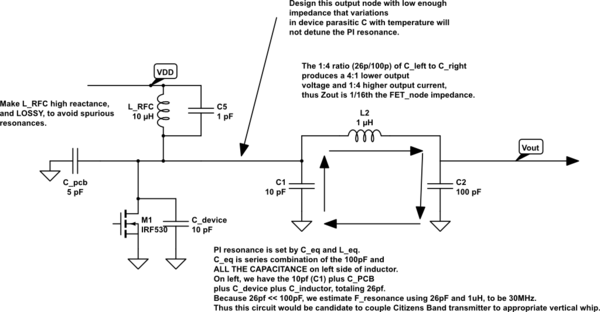 Pi networks with equal caps are intended to work with equal Zsource and Zload.

Not the answer you're looking for? Browse other questions tagged rf pcb-design antenna impedance-matching matching or ask your own question.