I am attempting to lower a 3.3V source to 3V for use with a sensor (which has a rating of 3V +/- 0.1V). Based on the other answers in here, I believe that placing two resistors in series would achieve this goal.

The sensor requirements are:

Using the math from this accepted answer:

I get that two possible values for R1 and R2:

Can someone confirm that this is correct? Also, will the Vout be affected if I connect the ground from the load at Vout to the same ground as this circuit?

The accepted answer from stevenh recommends use of a LDO regulator manufactured by Torex (XC6210) which supplies the required 3.0 voltage and 100mA current. I ordered the exact part from DigiKey and to my surprise it showed up and was about the size of a small pill (had never ordered a surface mount before). I have been searching for a viable alternative that is "through hole" mounting type, but for some reason there does not seem to be a solution. Am I missing something or do I need to have the circuit printed professionally to test?

Your math for the resistor divider is correct, but the output voltage will change it you connect anything to it. You can't draw 100mA from it. The output will sag to zero at a 16mA load.

That's 3%, that requires already precision components. Standard components are often 5%. Also keep in mind that the 3.3V may have a 5% tolerance as well!

A series resistor was suggested. That's the cheapest solution. And the worst. It's a Bad Habit™ you never should adopt. The voltage drop across the resistor changes with the load, so that you don't get a properly regulated 3V.

edit
I'm getting some critique on this. The reason I'm against a series resistor as a voltage regulator is that basic specs for a regulator, like line regulation and load regulation are very bad. But! This seems to be a special case. The load is a Wheatstone bridge which has a rather constant resistance, probably far more constant than the 10% the spec mentions (which is probably process tolerance, not measurement variation). A constant load means a constant voltage drop across the resistor, so that fixes the load regulation question. Then line regulation. Input is 3.3V from an iPhone. The voltage suggests this is regulated too, but we don't know for sure. If it's regulated then there's no line regulation issue either, and the series resistor can be seen as half of a resistor voltage divider, dividing a fixed voltage. In that case a series resistor will work. I have no problem admitting that. I still have to see the 3.3V confirmed, though. If it can vary the resistor is still bad, regardless of the constant load! In most cases either the input voltage or the load (or both) is variable, and then a series resistor won't give you a properly regulated, fixed output voltage.
Figures: the series resistor will give you a line regulation of 910mV/V. Compare with an LM7805, which has a typical line regulation of 0.2mV/V.

The series Schottky diode's voltage also varies a bit with current, but there's also process variation. Tony's graphs show typical and maximum voltage drops, but if you want to use one it's the minimum voltage drop which is important as well. Check it before use. Especially if the 3.3V would have a +5% tolerance (=3.47V). Tony's diode only drops 250mV typical, at this input voltage that would be too little. This diode only drops 150mV at 100mA, so that wouldn't even do at the nominal input voltage.

The zener diode that Kaz proposed also suffers from process variations. At 5mA this 3V zener can have a reverse voltage between 2.85V and 3.15V, which is outside the limits you specify. Most zener diodes will have this kind of variation (5%). Precision zeners (2%, 1%) exist, though. Your zener will have to draw at least 10mA, preferably 15mA (5 to keep it stabilizing, 10 to cover the 10mA tolerance on the load), which may or not may be within your budget.
A zener with a differential resistance of 30\$\Omega\$ drawing 15mA has a line regulation of 860mV/V, so that's only as good (or bad) as the resistor.

The neatest solution is an LDO regulator. It's a bit more expensive but the specs are worth it. My favorite for low power applications is the Seiko S-812C (only 1\$\mu\$A ground current!), but that can't supply the required 100mA. The Torex XC6210 however can, even up to 700mA. 2% accurate, only 50mV dropout voltage and only 35\$\mu\$A ground current.

edit
Typical application for the XC6210: 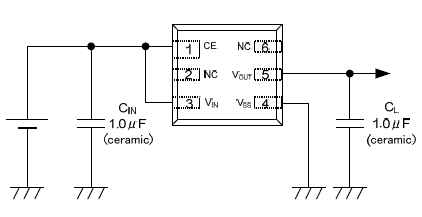 Don't forget the capacitors, especially the output cap. And don't forget to connect the Chip Enable (CE) to \$V_{IN}\$.

You need only one resistor in series with the device. That resistor has to drop 0.3 volts, so we know V. You need to know how much current the device draws when on a 3V supply. That gives you I. Then you can solve V = IR for R.

If the device draws variable current, then these resistor based methods will not provide a "stiff" voltage of 3V.

In that case the thing to try would be a 3V Zener diode in series with a resistor (similar to your two resistor circuit diagram, but the bottom resistor is replaced with the Zener). You take the voltage across the Zener to supply the sensor.

The resistance has to be such that the voltage will not drop below 3 under the maximum possible current draw.

Example: suppose the device draws up to 0.1 mA. Assume that when the device is drawing this maximum current, the voltage is at 3V, just on the threshold of closing off the Zener diode. I.e. the device is getting the entire 0.1 mA and nothing is going through the diode. The resistor has to drop 0.3V, which at that current calls for 0.3V/0.0001A = 3000. You need a 3K resistor on top of the 3V Zener.

Suppose the device draws less than 0.1 mA at times. In fact, suppose the worst case: the device shuts off, and behaves like an open circuit. In that case, 0.1 mA will still flow through the resistor because the Zener clamps the voltage at 3V. But now the current is going through the Zener instead of the device.

That's the idea: the Zener keeps the voltage at 3, and picks up the excess current.

What if your device draws more current than the 0.1 mA design assumption? This means that the voltage across the resistor will drop more than 0.3V and so the voltage starts to fall below 3V. The Zener diode is then not conducting and is out of the picture. Further demands on current just drop the voltage. The circuit no longer provides regulation.

This hot wire sensor needs an accurate voltage to function. You could use a diode drop of 0.25 V from a 1 Amp Schottky diode and this would work over a limited temperature range as diodes are also great thermometers with a negative voltage vs temp. characteristic so V drop can range from 0.15 to 0.35V over the military temperature range.

If you define your operating temperature range of the ambient and temp rise inside the case to where this diode could be mounted, then you can do a worst case tolerance analysis to ensure the supply will meet the sensor specs or conversely test it and have calibration error curve to correct the results on the iPhone software, taking into consideration the iPhone battery voltage.

The MBR120VLSFT1 costs $0.11 on tape & Reel.
Many alternate parts both leaded and Surface mount depending on total requirements.

See the variation on each graph for TYP to MAX variation at the bottom of the axis (0.1A) with temperature and consider what is your operating range. 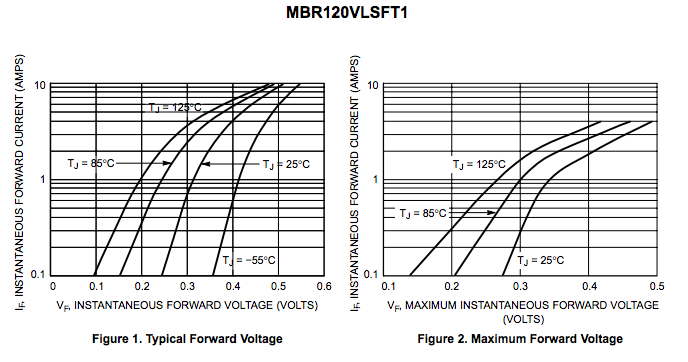 The accuracy of the system is totally dependant on the calibration of the unit and the error in assumptions. A thorough design review of any potential solution would include;

None of the solutions offered did the above, so if I were conducting a Design Review, all presentations (including my own ;) would have been rejected, and reconvened when completed. As this forum is not a formal process, many valuable suggestions have been made but many valid and invalid criticisms have been made. The worst ones are the ones which are only half-baked, meaning that they drew a conclusion and presented an un-finished argument without full analysis which might (IMHO) contradict the (possibly false) assumption due to lack of full Sensitivity Analysis.

( I offer this Answer to reflect my real-world design review experience having done this for large and small commercial engineering/manufacturing corporations in Aerospace, Telecom and AMR industries.)

A reverse engineering analysis of the sensor is required and its specifications.

Now let us examine the solutions offered to meet the 3.0Vdc supply

Now go do your SA and DVT plan before you finish your Designs.

**Fun Fact: Did you know Charles Wheatstone invented an Encryption method in 1854? What was it called? Now be marvelous and "play fair" with the hard working Engineers who contribute their spare time & opinions, based on experience to this pro bono site!!

Not the answer you're looking for? Browse other questions tagged voltage voltage-divider or ask your own question.

4
How can I know if I'm safe from burning out my robot with more voltage?