Relationship between potential in batteries and zero potential at infinity [closed]

I have been wondering really hard about what is the relationship between the defined zero potential at infinity as we do in physics, and the potential differences in circuits using batteries or other voltage sources.

Suppose we have a circuit with a battery and a resistor, and we measure the voltage across the resistor, what is the relationship between this potential and the zero defined at infinity?

As we know, the potential at a point due to an electric field is the integral from infinity to that point of E.dl, so how do you use this to calculate the potential across the resistor?

I know the zero of the circuit is in the circuit not at infinity as that would be dumb, but still this question hurts my brain. I want to know how do you calculate the potential across the resistor using the zero at infinity.

Can I define the potential across the resistor in relation to the zero at infinity or this doesn't exist ?

What direction does the electric field inside this resistor point to?

It's probably easiest to go right back to the definition of potential to see what's happening.

A potential field is one where the potential energy of an item that feels that field is dependent only on its position. For instance, in a gravity field, the energy of a test mass is given by its height alone. The change of energy in moving from height 1 to 2 is the same as that released by moving from 2 to 1. This energy is measured in Newton.meters (Nm) aka Joules.

In an electric field, you use a test charge instead of a test mass. It needs energy to move it to a higher potential, and releases the same amount of energy when moved to a lower potential. This energy is measured in charge.volts. In atomic physics, we use eV, electron.volts, but in electrical engineering, we tend to use coulomb.volts, aka Joules, aka watt.seconds.

What a multimeter does is allow us a short-cut way to estimate the energy changes that would happen as we move this test charge around. If we connect the probes across a battery, it will read directly what the voltage difference is between two points. If we took one coulomb of charge, and moved it from one terminal of a 12v battery to the other, it would absorb (if we were charging) or deliver (if the battery was discharging) 12 coulomb.volts, that is, 12 Joules.

Now let's push our test charge out from one battery terminal to a third point. The energy it took to do that is the potential difference of the third point to that at which we started. Now let's bring it back to the other terminal. The difference in energy for the whole trip will be 12 charge.volts. It doesn't matter (conceptually) where that third point is, at mains ground, on the moon, at infinity, the round trip journey still has the same change in energy.

As the only thing we can measure is the difference between two potentials, we can assign an arbitrary reference point. We could measure the potentials of several objects, then add the same constant to each measure, and the potential differences would stay the same.

For instance, in a gravity field, there are several common 'zero potential' reference levels. There's the floor level, local ground level, mean sea level, and deep space, depending on what your profession and purpose is.

In an electric field, electrical engineers tend to use earth potential or local chassis as zero, where physicists might sometimes prefer to use infinity. Either reference can be translated into the other by simply adding a constant to all potentials.

So 'zero potential at infinity' is a definition, not a measurement. 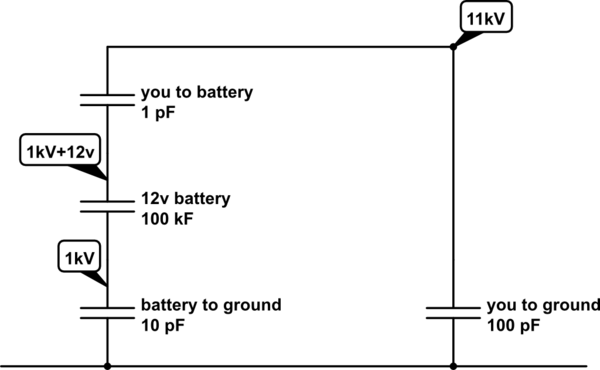 The idea is that initially the battery was at ground potential, but then you walked across a carpet, getting charged to 11kV in the process, and then held out a hand and waved it 100mm from the battery.

You can see that 1pF capacity to the battery gets charged to about 10kV, moving a charge of CV = 10nC.

As that charge also charges the battery capacity to ground, the battery case gets charged to 1kV (Q/C = V). See how easy it is to alter the potential of things when they're not grounded.

That charge also flows through the battery (in the configuration I've drawn it). If we do V = Q/C again, we find the battery voltage has changed by 100fV (0.1pV), which is not very much.

In the OP, you said (my emphasis)

'The integral' - there are several types of integral, things you can integrate, ways to do it. Unfortunately, my complex algebra was my weak suit at college, so I can't spell them all out or use accepted terminology.

The integral that's relevant here is the energy that's required to move a test charge from A to B. One way to do it would be the summation of the force.distance product (ie elements of work) as we move along a line from A to B, or \$\int_A^B force \,dl\$ . This integral is conservative, it doesn't matter what path is taken from A to B, the integral is always the same. This is the definition of a potential field.

If you are getting different results for integrating from A to B either directly, or via a point at infinity, then you are using the wrong integral, or visualising potential incorrectly, or both.

When people say 'electric field', they usually mean the gradient of the potential, so volts/meter.

There is an electric field inside the resistor as well, that makes the charge carriers move (don't get hung up in quantum mechanics, classical will do at this stage).

Restart your mental model with a potential field that has a defined voltage everywhere, and where the line integral between two points is independent of the path taken (caveat, this doesn't work where magnetic fields are changing, looping round a transformer core does affect the line integral, but that's for a later lesson!) Then see the electric field as the gradient of the potential field.

Not the answer you're looking for? Browse other questions tagged voltage current resistors charge or ask your own question.

-2
what really is negative voltage in ELECTRON AND HOLE TERMS?