How does this power inverter circuit work?

I'm looking for a power inverter for a DC voltage and I found this circuit on Wikipedia (I'm asking about the one on the bottom; ignore the one on top because it's the electromechanical equivalent of the one below.). I don't understand how it could possibly work, though. Isn't the negative terminal of the voltage source connected to the P-junctions, making reverse-biased connections to both transistors? And if that's the case, how do we get any current flow, much less a switch? 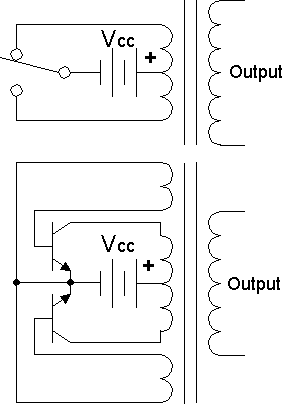 Here is the Wikipedia article that I found the circuit on.

The emitter is negative (usually 0V gnd) relative to the collector which pulls coil current from a common V+ in either direction.

This primitive drawing uses NPN to create a "Push-Pull" free-running Oscillator determined by the LC characteristics of the transformer. The outer primary coils sample the drive current and polarity is such with delay that it becomes a positive feedback loop or AC coupled pulses to drive the base and maintain oscillation as a quasi-square wave with cross-over deadtime.

Since the core is shared , each NPN takes turns in driving the flux in opposite directions and the turns ratio uses the individual winding turns not the sum of both for voltage ratio from an effective conversion from dc to ac of;

It is more common now to use MOSFET's and a controlled complementary gate signals with a defined dead-time to prevent shoot-thru across Vcc but this method guarantees a dead time but deadtime determined by slew rates then use optical feedback to control the clocks with precise controls on either skipped pulses for low power use or increase clock speeds or PFM for boost control or PWM for buck control.

The simplified diagrams in that article are only meant to be suggestive of the general circuit topology, not taken as complete working circuits.

This particular power oscillator won't reliably start up on its own without additional components. But if you assume that one transistor conducts more than the other, this induces current into the center-tapped primary winding. The two feedback windings are connected such that the drive of that transistor is increased while the other is decreased. In short order, the conducting transistor is saturated and the other is cut off.

The primary current continues to increase until the transformer core saturates, at which point, the voltages from the feedback windings start to switch polarity. This causes the conducting transistor to cut off and the other transistor to switch on. Now the primary current builds up in the other direction until the core saturates in that direction, at which point, the whole cycle starts over again.

The oscillation frequency depends primarily on the effective inductance of the transformer's primary winding, the input voltage, and the saturation current of the transformer. Most importantly, it varies significantly with load, which makes the circuit completely inappropriate for any load that requires a particular frequency.

Not the answer you're looking for? Browse other questions tagged power schematics or ask your own question.