What is the bypass capacitor at the emitter of a common-emitter amplifier for?

Why do we have the by pass capacitor parallel to R(E) in this amplifier circuit? They say it is to bypasses the RE resistor for AC signals but then why is it required to by pass the R(E)

It is tricky to see where the negative feedback is in a common-emitter amplifier but, consider what happens when the emitter resistor isn't present i.e. the emitter is connected directly to 0 volts. The signal input into the base then becomes an input into a grounded and forward biased diode.

Because the base-emitter region is a diode, when you raise the base voltage (NPN transistor) you get the input impedance characteristic of a diode: - 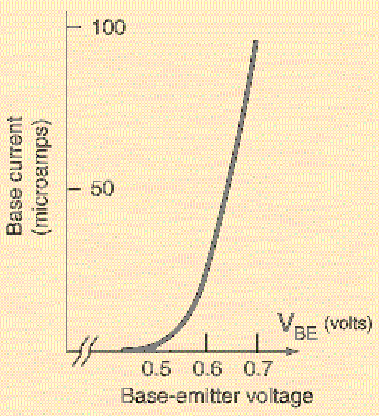 Picture taken from hyperphysics and simplified.

You should be able to see that a small change in base-emitter voltage produces a large change in base current around the 0.6 volt area.

So, if the base current changes from 2uA to 100 uA over the base voltage range 0.5 volts to 0.7 volts then the collector current is going to try to change by a value that is hFE times higher i.e. it will change from 200 uA to 10 mA (assuming that the BJT's hFE is 100).

If you have a 1 kohm collector resistor and a 15 volt supply, then the initial voltage at the collector due to the 0.5 volts at the base is: -

When the base voltage rises to 0.7 volts the collector voltage falls to: -

An impact of this is that there is now a signal voltage seen at the emitter and that signal voltage becomes virtually the same signal voltage as at the base but about 0.6 volts DC lower (for an NPN transistor). After all, it's just a forward biased diode in series with an emitter resistor i.e. this should not be unexpected.

Now, because it's reasonable to say that emitter and collector currents are the same, the circuit's voltage gain tends to become Rc/Re and, no longer do we have a strong dependency of voltage gain on hFE and temperature (Vbe changes with temperature at -2 mV per degC).

The bypass capacitor is an attempt to make voltage gain for AC signals larger than the DC gain set by Rc and Re. It adds problems and it solves some problems and is very much a mixed blessing. Input impedance for AC signals pretty much falls to the value when not using an emitter resistor.

The negative feedback consists in the fact that when the output signal increases, the current flowing in the collector (and so the emitter) also increases. If the current on the emitter increases the voltage across the Re increases and the potential (Ve) of the emitter becomes higher. So the Vbe of the transistor will get lower : Vbe = Vb - Ve. A lower Vbe bring to a lower gain. That's the negative feedback. If you put that capacitor to ground you will reduce this effect because at the operating frequency the capacitor will have a low impedance and so in parallel with Re will lower the whole emitter impedance, reducing the feedback effect.

What is the bypass capacitor at the emitter of an emitter-follower in an amplifier for?

to increase its ac gain without affecting dc stability.

The transistor needs to be biased at DC. R1 and R2 set the base voltage, thus Re sets the emitter current.

This biasing point determines the transistor's Gm, and thus its dynamic internal_re = 1/Gm. If it is biased around 24mA, then Gm=1A/V and internal_re=1ohm.

Now, without the bypass cap, the gain of this transistor would be Rc/(Re+internal_re) and this is likely to be low.

Reducing Re to increase the gain makes it harder to control the bias current at DC.

Bypassing Re with a cap provides a solution: the cap shorts AC signals, so AC gain is now Rc/internal_re which is much larger.

Since Re and the bypass cap control the gain, you can in fact use any network you want here to shape the frequency response of the circuit, not just a simple RC.

Not the answer you're looking for? Browse other questions tagged amplifier gain bypass-capacitor or ask your own question.