LED light fixture glows when not turned on 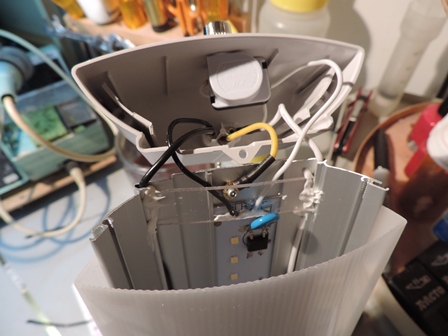 The LED shop light fixture has a glow to it. Looked like the LEDs were turned on, but not all the way. The power switch is turned off. Don’t know why I did this but I took one of those three prong adaptors converters to two prong and to my surprise the light fixture didn’t light up. I unplug the cord with the adaptor and turned it around and it still didn’t light up. The power supply electronics inside the light fixture must be using the earth ground wire somehow. Using my volt meter. I measured to earth ground to the green wire that comes out of the adaptor and to my surprise depending how I plug in the adaptor. I’m getting 112 volts AC. That's because the adaptor isn't keyed and I'm switching the HOT and NEUTRAL around depending how I plug it in.

I connected the LED light fixture to “Safety Analyzer tester”. When I press the “Open Ground” button, the fixture stops glowing (lightly lite LED’s). Looks like the power supply circuit inside the fixture has a connection to “Earth Ground”. I then switched the “Normal” on the polarity switch to “Reverse” and the LED’s were off. Switching the Neutral to open position has no effect. I'm thinking of taking them apart and see inside what's going on or take them back.

I figured out the problem.

In this light fixture you can clearly see the white wire (neutral/common) is connected to the light switch, turning the power off the LED light strip. Commonly we switch off the “HOT” to your light socket so when you change your bulb you have a less of a chance of getting electrocuted (that’s another story for later). Sometimes in Power supply circuits they place capacitors in there to help filter electrical noise out. Also known as suppressers (electronics to reduce unwanted noise or oscillation in a circuit or unwanted frequencies in a signal). Depending on how or where they are placed in the circuit it could possible cause some issue if not installed correctly or if the circuit isn’t designed correctly.

The current is flowing through capacitor C2, just enough to turn the LED’s on slightly. If the switch was on the hot side, this problem wouldn’t be happening. I still may use them just not connect the “earth ground” wire. Because that’s providing the return path for lighting the LED’s. 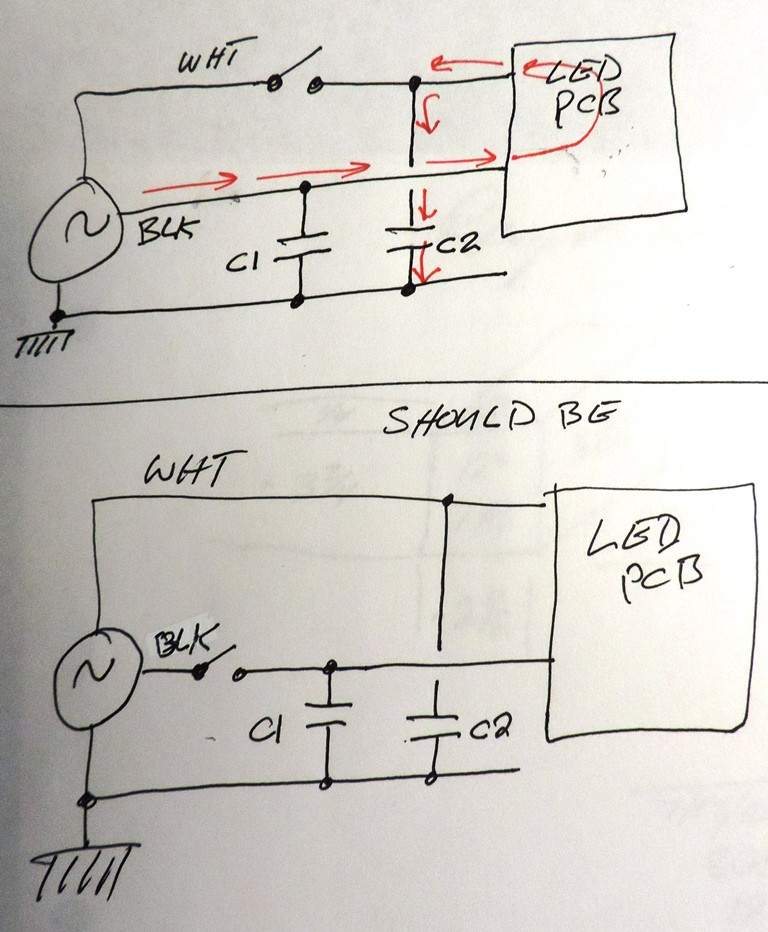 It has been posted elsewhere, but there appear to be several reasons why LEDs can glow when the light is switched off. The underlying reason, of course, is that LEDs require very little power to illuminate. There is a video of someone standing under some transmissions lines and getting a LED to glow from the induced current.

They are dangerous junk, and either falsified their UL listing, or altered the product after getting listed. The first warning sign is the switching the neutral, that may have been sloppy construction. But then having leaks to ground? Crazy, nothing should do that. That is a guaranteed GFCI trip especially if you have several.

But what about that switch?

When LED fixtures glow, the usual reason is the light switch isn't a switch. It's a dimmer, motion sensor, lighted switch or some other powered device -- which powers itself by leaking a small amount of current through the light bulb. It is intended for incandescent light bulbs, which have near zero impedance when off, and this works great. With LEDs, they often glow slightly because the leak-through current is enough to light them up.

The way to detect this situation is to put a single incandescent bulb in parallel with the LED fixtures (i.e. Supply it 120V or 230V off the same switch). If the LEDs suddenly behave properly, that was the reason.

What about that odd sub-120V voltage? Those are often due to measuring with a high impedance DVM, and picking up phantom voltage induced onto the wire by capacitive coupling. You detect this by using a lower impedance meter (one with a physical meter movement will suffice) or putting a trivial load in parallel with the test leads like a night-light (again, incandescent is better) or just a 10k resistor. If the voltage disappears, it was phantom.

Are you blind guessing about the capacitors between conductors and ground? Those shouldn't exist. In mains electrical, ground is nothing but a safety shield. To butcher Sigmund Freud, sometimes a ground fault is just a ground fault!

0
Mysterious LEDs glowing in spike buster without switching on