If Conventional Current is wrong, how can I trace the flow of current in a schematic?

If Conventional Current is backwards, how do I look at something like this schematic and trace the flow of current? I'd like to follow the design linearly from positive to negative. 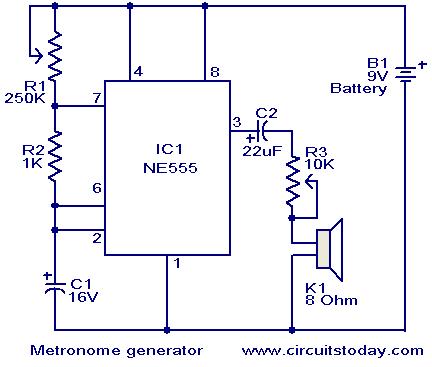 When the battery is on, does current go to 8, then 4, then through R1 and so on?

Does the current get "back around" to the side of the capacitor, 1, and the speaker eventually (though fast)?

How can this be so if in reality electrons flow from negative to positive?

Edit: If the current were water here, how would I see that physically on the wiring, as if they were pipes?

Conventional current being backwards from electron flow has no effect whatsoever on circuit analysis. If you really wanted, you could swap the signs on all your currents and voltages and the math would work out the same, but people would be confused.

If you're doing an ad-hoc intuitive analysis without any math, well, it still doesn't matter whether you start at the positive end or the negative end of things, or neither.

The behavior of currents flowing in wires and through components can and should be be understood symmetrically — positive and negative voltages/currents, or electrons and “holes”, being equal and opposite to each other.

The causality, the ways changes propagate around a circuit, is also symmetric. If you close a switch or make some other such change, the changes in voltage and current propagate away from the switch along both connected wires — with opposite signs, but otherwise completely identical, at the same speed.

Specific components (diodes, ICs, capacitors, tubes…) may have polarity, so they require or only allow a flow with a specific direction/sign, but it does not actually matter at all for understanding the behavior of the circuit which one matches the actual flow of electrons — only if you want to understand why the components do what they do does that begin to matter.

if Conventional current is wrong

Conventional current: used by engineers and physicists everywhere. It's what's measured by ammeters! It applies to all circuits, including the non-electron flows in dirt, nerves, acids, plasmas, etc.

"Electron current:" used by technicians during WWII ...and by several generations of students taught by them. Applies to solid metals, and especially to vacuum tubes. It cannot explain nerves and batteries, semiconductors and plasmas, or any situation where proton-flows or mobile ions are paramount.

In other words, electron current is wrong. Don't use it. If you have a textbook which employs backwards current (electron current,) just throw it away. Heh, or perhaps chop it up, so it cannot harm anyone.

how can I trace the flow of current in a schematic?

To understand circuits, we don't trace the flow. (After all, batteries don't spit out constant current.) Instead, we study the schematic as a whole, and determine the pattern of voltages across the various circuit points. Then, knowing the voltages, we can figure out the current in any component.

"Tracing the flow" doesn't work, since it isn't based on Ohm's Law, and it leads to mistaken thinking. For example, at any "Y" junction, how do the charges know to split up? How do they know which path to take? They don't. Instead, the voltages far downstream are determining the current in the entire circuit.

Also, to visualize the flow, we DON'T start at the power supply. After all, the wires are already filled with electrons. Current is like a flywheel or drive-belt, so we can start at any point on the circle. That's why the currents aren't simple and obvious: a schematic is like a bunch of flywheels, all loosely coupled together and spinning at different rates. (A battery isn't a source of electricity; a battery is actually an "electricity pump.")

If tracing the flow doesn't lead to understanding, then what does? Ah, that would be voltage, as well as the voltage-dividers scattered throughout the circuitry. The goal of electronics students is to learn to "see the voltages" all throughout a schematic.

One education site which goes into the voltage-divider viewpoint is NCSU/Williamson:

Also check out Falstad's java circuit simulator, where voltages are shown as colors. Here's the animated guts of a 555:

If Conventional Current is backwards, how do I look at something like this schematic and trace the flow of current?

The convention that current flows from + to - was agreed on long before the discovery of the electron by J J Thompson in 1898. It worked in all their calculations then and still works now.

In your schematic you have correctly drawn the positive rail at the top and the negative at the bottom as is favoured by most electronics designers. Current then (generally) flows from top to bottom. 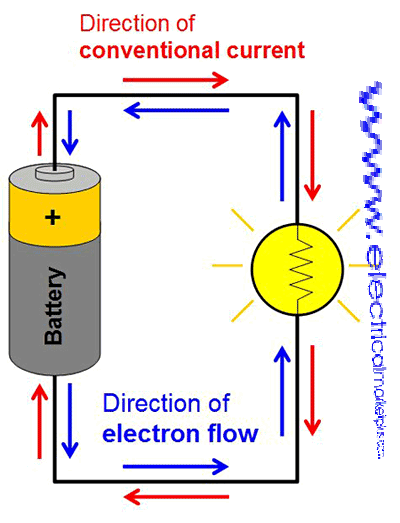 Figure 1. Conventional current vs electron flow. Both move simultaneously with equal effect - just in opposite directions. Source: Electrical Market Plus.

To analyse your circuit you would need a diagram of the internals of the 555 to understand how it switches when voltages change at its terminals.

Start with basic circuits and build up. It's a fascinating subject that you can spend a lifetime studying and continue to learn new things every day.

In your schematic, conventional current flows from the battery + terminal to the 555 pin 4 AND 555 pin 8 AND R1 simultaneously.

Any further analysis of current flow in that circuit requires a study of the internal workings of the 555 IC.

Forget the "water analogy" (and any other analogy you find), as it is only useful in very limited situations, and can be confusing or misleading otherwise.

Not the answer you're looking for? Browse other questions tagged current basic or ask your own question.

1
Why is conventional current still taught in school when it is unreal, given that real current flow is electron flow?