Why 180 degree is taken as phase cross over frequency in bode plot? In bode plot, grid impedance(Zg) and inverter impedance(Zi) is plotted for both magnitude and phase. The frequency at which Zg and Zi crosses in magnitude plot, see the phase in phase plot of bode plot at the same frequency.if the phase is above 180 degree,the system is unstable and stable when phase is below 180 degree.

here my question is , why we choose 180 degree as the point to be a system stable or unstable

Without seeing the diagrams your are talking about is a little difficult, but let me guess. At 180 phase delay, any controller loop is at critical point. Why? Because the negative feedback loop becomes a positive feedback loop. The feedback signal is not subtracted from setpoint value, but rather added. So what you get is an oscillator.

If I understand your question correctly, you seem bothered by the interaction between a source featuring a certain output impedance \$Z_{th}(s)\$ and loaded by a switching converter offering an input impedance \$Z_{in}(s)\$. A closed-loop-operated converter offers a negative incremental resistance (\$arg(Z_{in}(f))=-180°)\$ as long as the converter rejects the input voltage variations. This is observable only in the low-frequency portion of the spectrum, where the loop gain \$T(s)\$ is the highest. As you soon as you start increasing the frequency, the loop gain falls and the argument of \$Z_{in}\$ becomes less negative. It becomes that of the open-loop-operated converter beyond crossover. The source output impedance is often dictated by the EMI filter output impedance you insert to fight perturbations. The equivalent schematic once a filter is inserted looks like that: 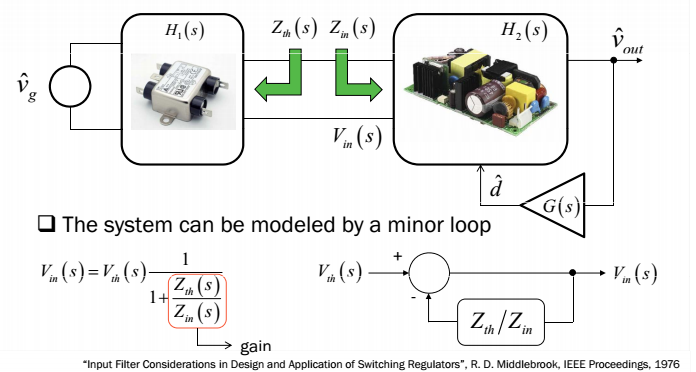 If you determine the voltage driving the converter and rearrange the expression, you can see the presence of a minor loop characterized by the ratio of \$Z_{th}\$ by \$Z_{in}\$. If this ratio becomes 1 - otherwise speaking you have overlapping points when you plot both magnitudes on a common-scale Bode plot - then you have condition for oscillations if the argument of \$\frac{Z_{th}}{Z_{in}}\$ becomes \$-180°\$. The difficulty is to assess this argument and Bode can sometimes be misleading. In this case, apply the Nyquist criteria and you will always be safe. Second option, damp \$Z_{th}\$ so that no overlap can be found - \$|Z_{th}(f)|<<|Z_{in}(f)|\$ - and you don't care about the phase anymore! You can find more information regarding interactions between a filter and a switching converter in a seminar taught at APEC this year.