I'm interested in the history of the logic design for the edge-triggered D flip-flop, as used in the SN7474. The design is composed of three set-reset latches (six NAND gates total) per flip-flop.

I've searched US patents for edge-triggered flip-flop design, but have not found one specifically for the three S-R latch design.

The subject came up as a result of a discussion on a private mailing list regarding the fact that the conventional J-K master-slave flip-flop design is NOT edge-triggered; pulses on J and/or K while the clock is high but stable can affect the Q (and not-Q) outputs of the FF at the following falling edge of the clock. That behavior is known as "pulse catching", and such a flip-flop is properly called pulse-triggered or level-triggered, but not edge-triggered. Early datasheets on J-K master-slave flip-flops actually had correct terminology and specifically stated that J and K should not change while the clock is high.

There are true edge-triggered J-K flip-flops which use a derivative of the three-S-R-latch D FF design, effectively generating an internal D input to the FF from J, K, and Q (and/or not-Q). The 74x109 is an example of that, using a not-K input rather than true K.

The Block II Apollo Guidance Computer (1965) used the three-SR edge-triggered flip flop circuit. I don't know if this was the origin of the circuit, but this pushes the date back a few years. The circuit is similar to the 7474's flip flop, but using NOR gates instead of NAND gates.

The AGC was one of the first IC-based computers, built out of NOR gates. It used S-R latches extensively; the edge-triggered flip flop is not as common but used for example here and here. A seven-gate variant is here.

(Thanks to Mike Stewart for info.) 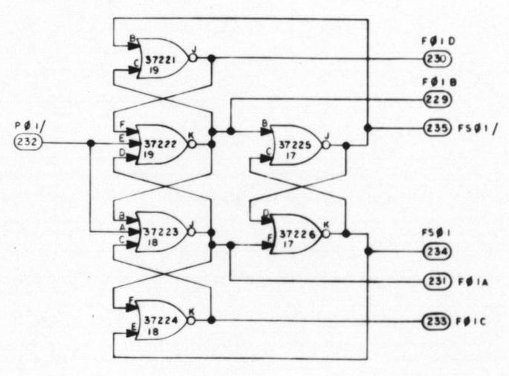 Edit: I've come across a 1966 document calling this a "Westinghouse flip flop" (Apollo Block II and LEM Computer Design Review page E-1). American Microelectronics Data 1964-1965 shows the Westinghouse WM-2203 "six-gate binary counter" using this circuit. There's also a Westinghouse patent 3018388A for a flip flop that might be related. Finally, this NASA document from 1966 describes Westinghouse building a power supply synchronizer IC using this flip flop circuit, called a "six gate binary". I conclude that Westinghouse had a key role in the creation of this flip flop.

Read the RTL book by Don Lancaster in 1968. Its on http://www.archive.org

RTL came before TTL and around p 112 he describes FF's in detail, but not a component databook.

but if you search there, you will find all the databooks too.

Not the answer you're looking for? Browse other questions tagged digital-logic integrated-circuit flipflop history or ask your own question.