I hope this question is not a repeat of others on this stack exchange concerning SPI. I've been searching for at least an hour and have not found the same problem/answer.

My friends and I are attempting to get an OLED and rotary encoder working together using our own personal board. Right now, we just want the position on the encoder to show up on the OLED.

An absolute position rotary encoder is hooked up with a development board using the ATmega2560 chip. The 2560 is talking to the encoder with these SPI settings:

I have the current program set to read from one of the encoder's internal EEPROM registers every second. Although I'm not yet certain about addressing the EEPROM accurately, the problem I would like to address is different.

I wasn't getting a response from the encoder, so I hooked up an oscilloscope and checked all four SPI lines, as seen below. For some reason, the MOSI line never drops below ~3.50V. The receiving device would still consider this a HIGH signal. 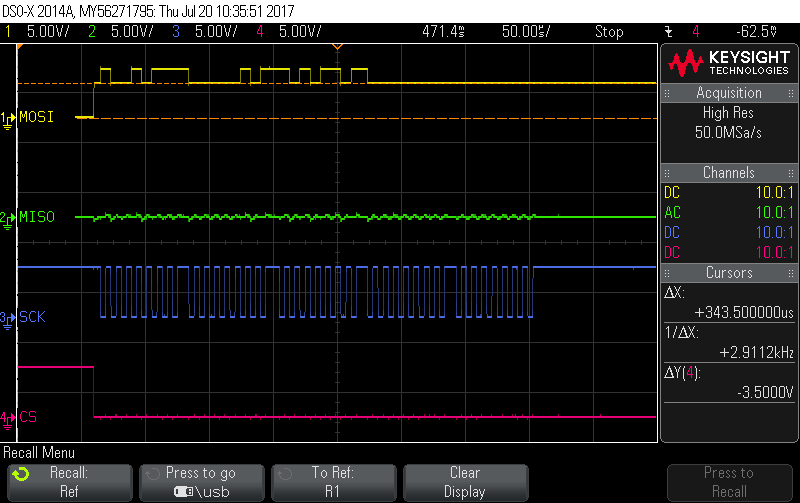 I have tried tapping into the OLED SPI connections since the display itself works with SPI. Nothing new happened. I've double-checked that I still have a working board, constantly reconnecting the OLED and disconnecting the encoder. The board definitely still works.

What might be the problem with the SPI? Is there a specific name for this problem?

That scope trace suggests that there is another driver on the MOSI signal, in addition to the MCU.

That is bad, since MOSI typically uses a push-pull driver and multiple push-pull drivers will conflict, if they attempt to drive to different logic levels at the same time. As a result, you tend to see a "stepped" voltage like you see on your MOSI scope trace, when the different conflicting drivers change the logic levels that each is driving. (In the worst case, multiple drivers of the same signal can become permanently damaged, if they exceed their allowed maximum sink/source current through the opposing driver.)

It isn't as simple as MOSI being shorted to Gnd as we wouldn't then see it reach ~5V, nor is it shorted to ~5V since the signal is 0V at the start of the trace. There appears to be a low resistance (e.g. another device's output driver? a low value resistor?) pulling it up. (See below.)

Is there a specific name for this problem?

Conflict between multiple drivers on the same signal. Your next step is to find out what else is driving that signal and why.

I browsed the encoder's datasheet. It is worth noting that it doesn't have a fixed SPI interface. It has a programmable serial interface, which can be SPI but can also be in other modes. I would check your programming of (and connections to) the encoder, to see if that is in a mode where it is driving the pin, which you believe is MOSI in SPI mode.

Notice how the MOSI signal starts at 0V, and goes to that ~3.5V level when -CS becomes active (low). Below, I have added a vertical white line onto your scope trace, to show that MOSI rises to ~3.5V at the same time as -CS is driven low, before the first clock pulse on SCK:

That correlation is a big hint that you are enabling the conflicting driver on the MOSI signal, when you drive -CS low. Assuming that the -CS signal goes only to the encoder, then that again makes the encoder the primary suspect.

sigh. I found the problem. When we hooked the custom board up, the MOSI and MISO lines were swapped. Case closed. >.< The encoder is now working as it should, as is the custom board. I think the tip-off was definitely that the MOSI line was trying to remain HI when I tried placing it LOW.

Hope that clears up a lot of questions.

For others who may come across this: I had a similar looking problem but it turns out the issue was that I needed to set the MOSI pin to output manually. I'm using Arduino IDE's built in SPI.h and Arduino Nano 168p. Also, I'm using SPI.beginTransaction(SPISettings(3000000, MSBFIRST, SPI_MODE1)) instead of the default SPI.begin(), so maybe the default sets the MOSI pin to output, but the custom settings mode does not. I dunno. Before adding pinMode(11, OUTPUT), the scope trace looked very similar to the above.

Not the answer you're looking for? Browse other questions tagged spi oscilloscope encoder rotary or ask your own question.