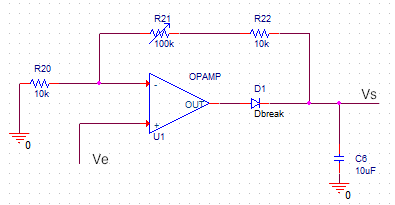 Here is a scope view of what I get before the diode (in blue : input, in yellow : output of the Op Amp): 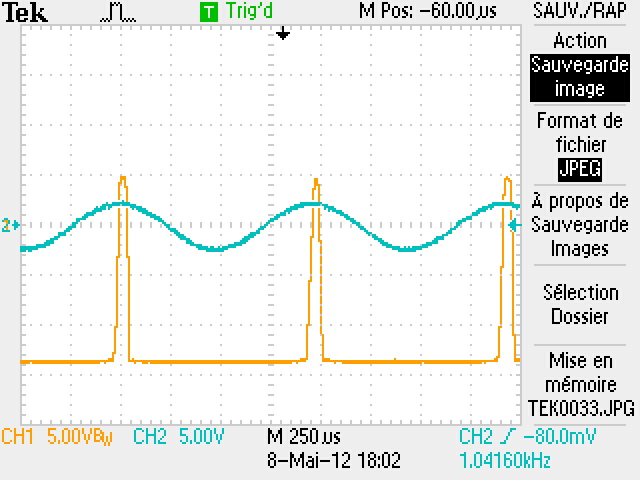 The circuit performs well in any case, it is just a wonder of comprehension.

You have a correctly connected positive peak detector that seems to be functioning correctly.

It would be instructive to look at Vs also. At the resolution of the traces you show, it probably will look flat and just a little below the levels of the peaks of the yellow trace. If you AC couple it and expand the voltage scale, you should see it go up sharply by a small step each cycle, then a linear ramp down between the steps. Even at the lowest gain setting when you have the shortest output time constant, that time constant is 200 ms. Your signal has period of less than 1 ms, so there will only be a small decay between the peaks of the input cycle. This is exactly what we are seeing the opamp do.

Olin's answer captures everything -- just wanted to add some plots.

Also, don't forget that you are getting amplification from the non-inverting amplifier configuration here -- currently a gain of (R20+R21+R22)/(R21+R22) = 12, according to your original schematic. If your input is truly a ~5Vpp sine wave, and your op-amp appears to be powered from +/-15V, your peak detector is quickly going to saturate at the upper rail and you won't be seeing the intended behavior.

I've drawn your active peak detector circuit but set the gain to 1, and added an explicit load resistance for discharge (although the capacitor also discharges through the feedback path as well): 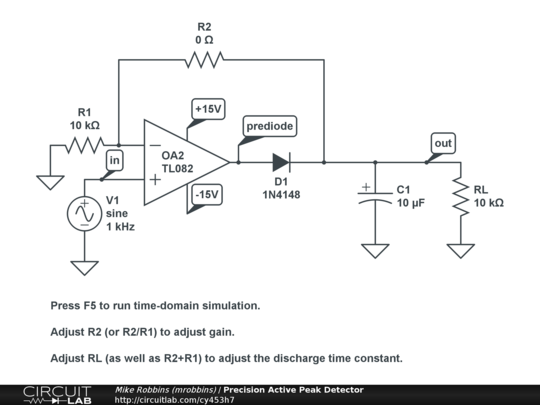 Looks a lot like your oscilloscope capture! You can see how V(prediode) is stuck to the negative output rail most of the time, but occasionally pumps a bit of charge through the diode to top off the capacitor. If you open the circuit, open it in the editor, and press F5, you'll see this plot and will be able to mouse over or zoom in to the V(out) line, and see the discharge that Olin mentioned (looking at Vs -- small step up, then slow discharge down, then repeat). The simulator also lets us plot the current into the diode, which may be instructive here:

I see your schematic has a non-inverting "Positive Peak detector". Yet your scope shows an inverting negative peak detector.

Please re-check your connections. for + - and diode Anode/Cathode. They appear to be reversed. It works well, just inverted.

Oh and since the inverting gain is adjustable from x1 to x10 the input signal should be small. I see a sine input = 2Vpp which is causing the abnormal pulse output. YOu are over-driving the input.

Not the answer you're looking for? Browse other questions tagged pic capacitor operational-amplifier diodes or ask your own question.