I'm running this regulator off of a ~12V car battery. I've set it up almost identically to the 'typical application' schematic and layout that the datasheet suggests to generate a 5 V output, except that I'm using a 22 μH inductor. 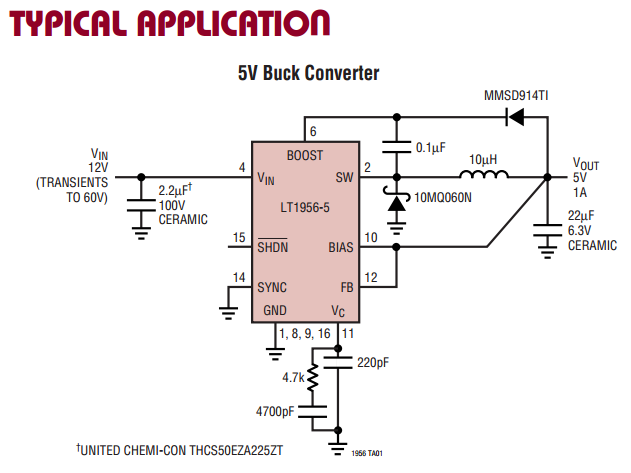 The problem is that when we run the starter motor, and also at undetermined points in time when the car is driving, the microprocessor on the board dies -- presumably due to some kind of glitch on the regulated 5 V.

I suspect the problem is noise, but I can't get a proper measurement of it while it is on the car. I'm going to try measure it in lab at some point.

I've got 8-9 0.1 μF bypass capacitors at the microprocessor, but apparently it isn't enough. Another problem might also be because the regulator is running in discontinuous mode most of the time. If I were to redesign it should I put some filters at the input of the regulator? Is this something that is typically necessary?

What's the best fix for this? It's too late for me to add signicant hardware to the PCB, but what would be the best thing to do if I redesigned it? You're likely dealing with either voltage spikes or big dips. I would tend to agree with those who believe that it's more likely a spike vs. a dip that's causing downstream damage.

You should put a high-power rated TVS or other crowbar across the input of your circuit, to attempt to contain big spikes. A DC line filter will also help smooth out high-frequency disturbances.

Ultimately, you may need a crowbar on the output as well, just in case the other protections fail (What happens if the buck goes to 99% duty cycle or the series MOSFET fails?) that's rated big enough to blow your fuse. Um ... please tell me you have a fuse in your design...

Another problem might also be because the regulator is running in discontinuous mode most of the time.

DCM is a good choice of operating mode for this topology, since there's only a type-2 compensation network on the voltage feedback. If the converter transitions to CCM, the added phase boost that a type-3 compensator gives is often necessary to ensure stability.

You may also be getting dropouts rather than spike ride-through.

If that is all the filter capacitance available on the 12V and 5V rails it won't last long. Quite likely the uCboard has some extra large caps on it.

One less than perfect system which worked well on a taxi system I was involved with long ago was to add a small lead acid battery at the input and feed it via a Schottky diode. Under cranking and misc dropout spikes the small battery provided the supply. It also adds a degree of +ve going spike filtering as well.

A lead acid battery is not a good long term solution as it runs at a diode drop below the main battery and experience shows that this is enough to reduce longevity by a surprising amount.

A supercap at the input would substitute well enough - or just a very large electrolytic. For T= VC/I - say 4C/I:

For +ve spikes a simple inductor input, cap to ground filter will help muchly. In this case the inductor can be in the supply wire so no PCB change. An exra cap can be too.

Not the answer you're looking for? Browse other questions tagged noise automotive buck or ask your own question.

15
Protection against automotive power supply hazards
8
How can I simulate and handle an automotive load dump?