How to compute input impedance?

I use a Sallen-Key filter for a project at university and I need to know its input impedance. Is there a way to compute it theoretically ? 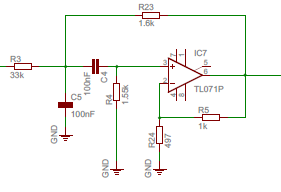 Yes, this is a standard circuit analysis problem.

Perform the analysis in the frequency domain (R and Xc) and connect a 1A ac current source at the input. Solve for the input voltage as a function of frequency and that expression is the impedance.

I suggest using nodal analysis to perform the analysis.

Assume that the op amp is ideal and so the current into the +/- terminals is zero and the voltage at these terminals are equal.

Calculating the input impedance by hand is almost certainly what you're supposed to do as the other answers have suggested. I just wanted to show you how to go about getting some numbers out of a circuit simulator so you could check your work (or apply the same concept to a more complicated circuit). Here's your Sallen-Key filter in CircuitLab: 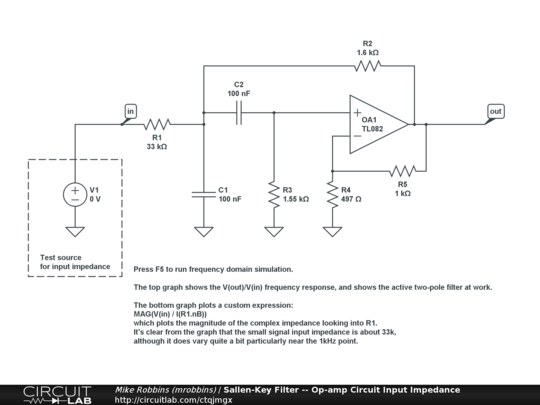 And here's the frequency domain simulation showing the input impedance looking into the input: 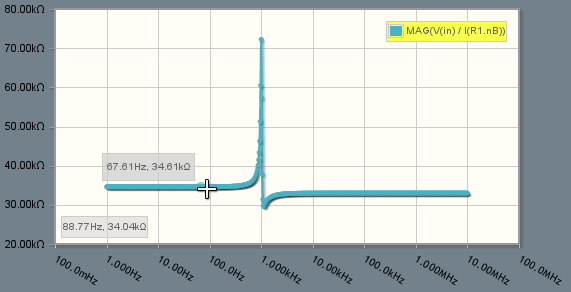 You can open the circuit and change the parameters, configuration, op-amp model, etc. Just hit F5 and you'll see the V(out)/V(in) Bode plot, as well as the input impedance plot that I've included a screenshot of above. Using custom expressions in the simulator, like MAG(V(in)/I(R1.nB)), allows you to calculate quantities like small signal impedances quite quickly!

Using a test current source, rather than a test voltage source, makes sense for how I'd probably go about solving this on paper. However, for simulation purposes, using a voltage source as the test input allows us to more easily understand the V(out)/V(in) Bode plot at the same time.

@snickers I pretty much just compute the Input Impedance, Zin in my Head.

Well you could solve for it using Ohm's Law and summing node equations, but after you've done it a few times, just do it in your head.

So if you had one of those nice HP or Anritsu Vector Network Analyzers, you get Zin with a big spike at f0 on a flat line where Zin starts at 35.6kΩ & ends at 33.0kΩ or something close to that...

But I do like the beautiful simulation and graph done above by one of our astute young Engineers.

See it my way? or your way starting with

Use the extra element theorem, as explained in Wikipedia. There are multiple paths to the solution with this approach (since any of the components may be made the "extra" one). Choosing C4 as the extra element looks like one of the simpler choices.

In your circuit, the op amp complicates things a bit, but you can write down the currents and voltages on the schematic to compute the various impedances required.

Once you've mastered the extra element theorem, you can then proceed to the generalized N-Extra Element Theorem (NEET, originally developed by S. Sabharwal), which enables you to write down the answer by inspection and a bit of algebra on the schematic:

You can obtain the input impedance of this active circuit using the fast analytical circuits techniques or FACTs. Install a test generator \$I_T\$ across the input terminals of your filter. The \$I_T\$ current is the stimulus while the voltage \$V_T\$ across the source is the response.

First, consider the circuit for \$s=0\$: open-circuit all caps. and inspect the circuit below. 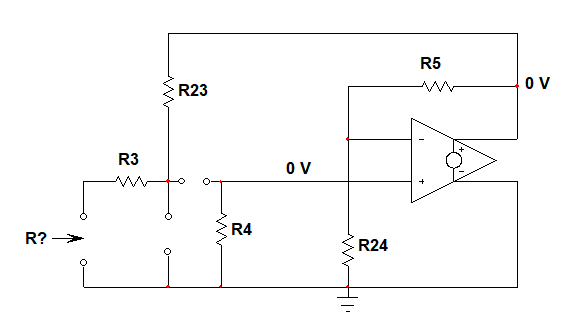 Now, reduce the excitation to 0 A and open-circuit the current source. Then "look" through the capacitor's connecting terminals to determine the associated time constants in this mode: 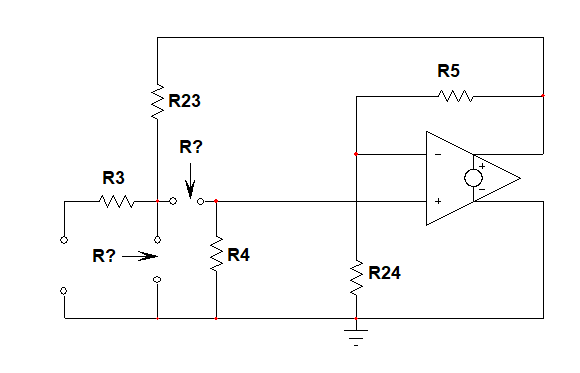 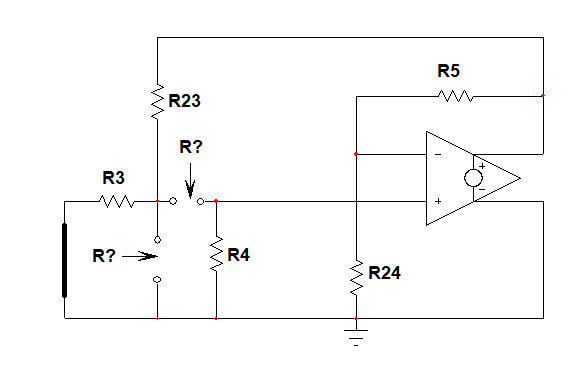 I have captured these data in a Mathcad sheet: 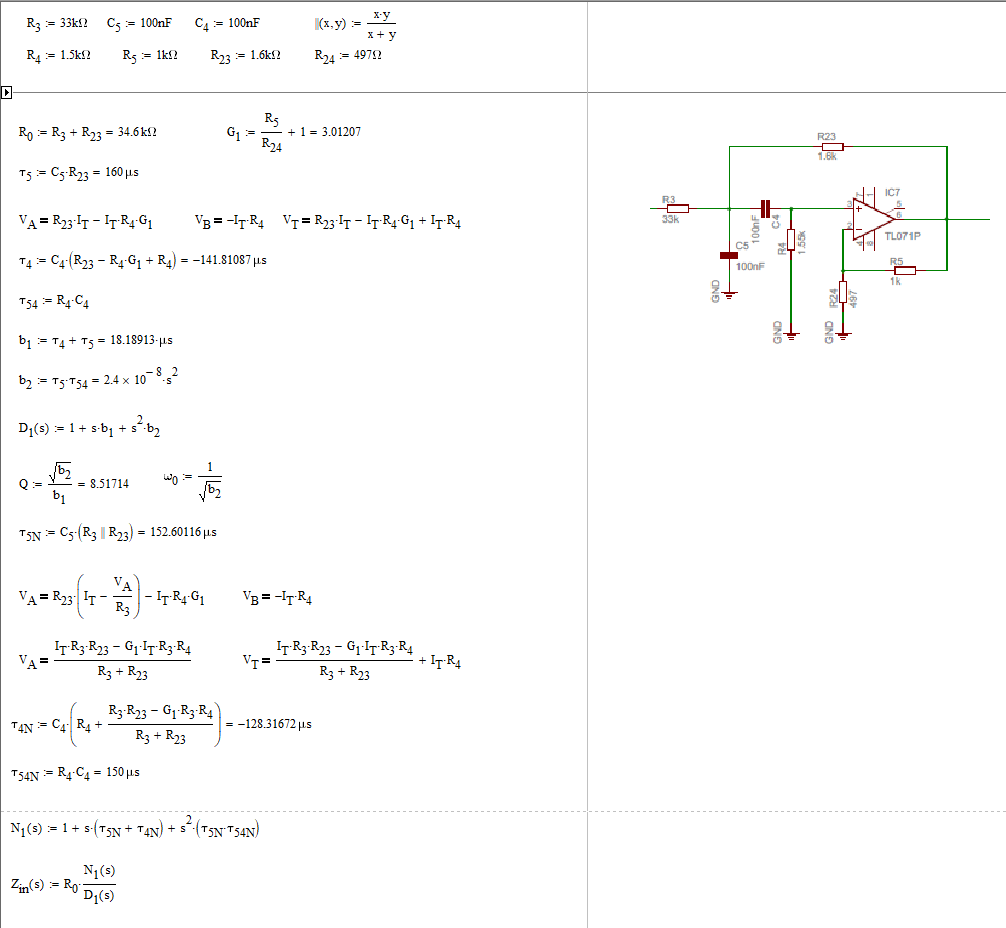 and the plots are here:

A quick SPICE sim tells us this is correct: 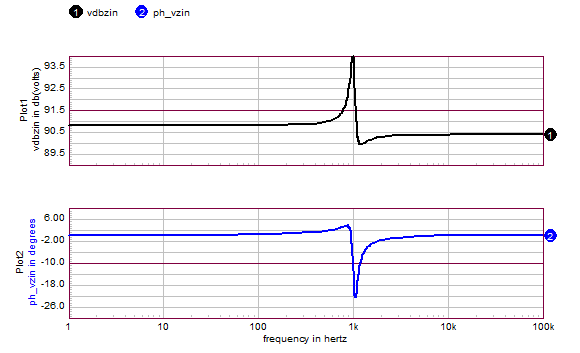 9
What are the properties of an N-bit microcontroller?
3
Losses in NE555 oscillator and Sallen-Key filter

2
Calculating symbolic input impedance of Multiple Feedback Low-Pass filters
3
Losses in NE555 oscillator and Sallen-Key filter
4
How to measure headphone impedance for a target cut off frequency?
0
Putting two sallen key filters in series
0
2nd order high pass filter PSPICE error
2
Does the Sallen-key filter require a buffer for low power applications?
0
Input impedance of a one stage voltage amplifier?
0
Does this Sallen and Key filter work on a single supply and does the input offset matter?
1
How to calculate the input impedance and transfer function
1
What type of filter did I accidentally create here?