Can I use voltage divider to reduce voltage from a set of battery connected in series which is 115 volt dc to 5 volt DC to use it as an input to a microcontroller and compare the value to turn on or off a UBS device?

What are the losses and is this possible without causing the resistors to heat up?

Yes you can but only if the microcontroller ground is connected to the battery ground. This may or may not be a good idea in your application. Make sure that fault currents can't find a return path to the battery through your micro.

It is worthwhile reading the resistor datasheet to understand what temperature the the resistor will be at in still air at that power dissipation. For example, I remember a colleague being delighted to find a compact wirewound resistor rated for 4 W. Great was his surprise when he realised that 4 W would cause the temperature to rise to over 200°C!

Note that if R2 becomes disconnected at either end you will be putting 110 V DC into your GPIO and this will destroy it.

To pick up what Harry started:

Assuming your MCU input current is above a couple µA:

you can't go for \$R_1+R_2=1M\Omega\$, because you cannot let the resistive divider be a loaded one; the "standby" current \$I_0\$ through \$R_1\$ needs to be much larger than the current draw of the microcontroller.

Now, more likely: The input current is significantly below 1 mA, so Harry's approach is fine.

I'm going to go off the deep end and provide a different option to consider.

A few things strike me immediately about the stated problem:

So I'd like to opto-isolate here, rather than use a resistive divider (for some reasons that have been discussed already.) But I also don't want something that might draw a lot of current from the batteries nor do I want a lot of complexity, either. I'd like it relatively "invisible" to the batteries (very low load) and cheap and to use readily available parts. I also want an easy-to-interpret signal for the microcontroller with adequate precision.

This is probably what I'd design for it: 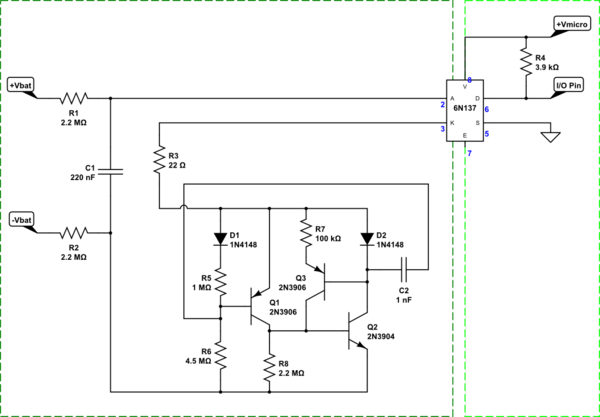 The circuit is just a relaxation oscillator.

On the left side is \$R\$ (represented by the sum of \$R_1\$ and \$R_2\$) and the \$C\$ (just \$C_1\$.) So \$C_1\$ charges up through that resistor pair. As it does so, the rest of the circuit (not including the microcontroller portion) monitors that capacitor voltage and self-triggers to discharge it when the voltage across \$C_1\$ gets large enough. In effect, it is a self-triggering SCR.

Ignoring the microcontroller side of things, a behavioral model would be something like this: 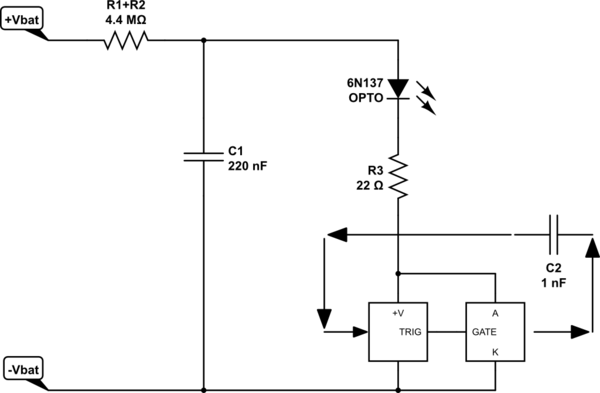 Returning to the first schematic again...

As drawn, average power draw from the battery system will be in the single-digit milliwatts range, even at full input voltage applied; with current draw in the tens of microamps.

I used two resistors (both \$R_1\$ and \$R_2\$) here just in case of an accidental short (with a screwdriver, or something.) That pair can be turned into a single resistor, though.

There's little dependence on specific values, it is more about relative values. While \$C_2\$ is needed for its positive feedback, it also isn't critical. Anything from ten times smaller to ten times larger and it won't hurt that much. (The circuit is pretty robust. But with some of these high valued resistors, it is possible to put enough dirt and grime into it and cause problems. Just keep it relatively clean, if possible.) Making it bigger will widen the low-going pulse. Making it smaller will narrow it.

The 6N137 is a nice opto-coupler part, sourced from multiple manufacturers, has very good isolation (differs depending on whose part is used), and is probably over-kill. But it is cheap and widely used, so I dropped it in. This galvanically isolates the higher voltage battery system from the microcontroller.

\$R_3\$ is a current-limiter part. The 6N137 needs more than \$7.5\:\textrm{mA}\$ per pulse. But the trigger and scr switch just dump all the charge in \$C_1\$, so a resistor limiter is probably helpful here. Use a lower value if regular pulses aren't coming through.

The above circuit will provide low-going pulses to the microcontroller pin. These pulses will probably be tens of microseconds wide. The number of pulses per second (or the time between each pulse) relates to the voltage. The relationship will need to be calibrated for any given circuit, because part variations will of course have a modest impact on the timing. But this is an easy step. A one-point calibration at the desired "threshold" may be sufficient, using a known voltage source, or else use different calibration points and use a developed formula. I believe that \$V_{BAT} \propto \Delta t\$, except that as the time period between pulses gets smaller the voltage must have been larger and therefore the proportional constant must be negative. But this should be pretty easy to work out, regardless.

If microcontroller does nt use much power then we can use the same concept as resister (not capacitive) transformerless power supply uses. The wattage of resistor and losses will b the main issue to deal with.

Instead of directly use a voltage divider to cut down a voltage of 110 V to 5 V, you can use voltage regulator such as 7805. Since, p = (V*V)/ R,we can say that resistance is inversely proportional to the power. So that , increasing resistance to drop a voltage to the required level, will drastically reduces the power dissipation. Using an IC 7805, is the most effective way instead of relying on resistors.Resistors may not be consistent in voltage divider. So, very easy and effective idea is using a voltage regulator.

By this concept, you need not to drop down a voltage to required level precisely say 5V. Instead make a voltage divider to drop around 20V which may reduce the burden on resistors and will be within the operating voltage range of 7805. According to data sheet 7805 can handle upto 25V as input for minimal current consumption of 550mA which would be enough for micro controller. Additionally there will be no fluctuations in input voltage to the microcontroller.

Since we use 500K, power consumption will be 24mV which is very low. So, using quarter watt resistor is enough.

This dropped 20V can be given as input to the 7805 which ultimately gives 5 V as output with out any fluctuations.

2
How to measure high DC voltage by micro-controller with an integrated approach?
3
High voltage (500V) measurement by scaling down voltage