is on how digital voltmeter works:

It makes some sense, but it is far from being precise.

I understand that finally we get our measure by ADC the signal that we know is proportional to the voltage. Question is how is this proportional signal produced and what relations are used. What gets measured really, is this the current measured by the number of charges per time, and how it is measured?

Many (probably most) current digital voltmeters are dual-slope integration. To translate to the hand-waving description of your article the point is to generate a pulse of width proportional to the ratio of the unknown voltage to a reference voltage. If you assume the reference is fixed, then it reduces to being proportional to the unknown voltage.

Here is the idealized waveform at the integrator output for a common series of chips:

The integrator is an amplifier pair and passives like this one (somewhat simplified):

The input is switched between the unknown voltage and the reference. Timing is controlled by a clock. The clock frequency is non-critical, however it must remain stable during the integration and de-integration phases. In other words, slow variations (say from temperature) are fine, but short-term stability must be better than the desired stability of the reading.

So the resulting measurement count is ideally 1000 * Vin/Vref, provided the integrator does not saturate, and assuming the integration time is 1000 clock cycles. Note that the count is not limited to 1000.

If the integration time (which is a fixed 1000 cycles) is chosen to be an integral number of cycles of a known periodic disturbance that effect can be minimized. For example, a time of 100ms will reject 50Hz, 60Hz, 400Hz etc. Practical chips typically include an auto-zero phase which eliminates the large offsets typical of CMOS op-amps, and there is a bit more logic needed to handle bipolar inputs and overrange, and fully differential inputs, but this is basically 'it'.

Suppose you have 1MHz crystal oscillator.

We will charge a capacitor from 0 volts to some voltage, using an R+C+opAmp integrator. We don't know the voltage, but we allowed the charging to occur for exactly one second. Exactly.

Now, using a precision voltage reference inside our DVM, we charge the cap back to zero volts, exactly, while TIMING the delay.

Then we perform some easy math: Vin = V_reference * Delay / 1 second.

The linked article doesn't give an adequate explanation of the operation of the scheme they are describing.

The scheme of Figure 1 is much more typical of digital voltmeters.

An alternative method is to generate a "staircase" output from the DAC by feeding it with an increasing binary count. When the DAC output exceeds the input signal the count value is latched and converted to a digital reading. 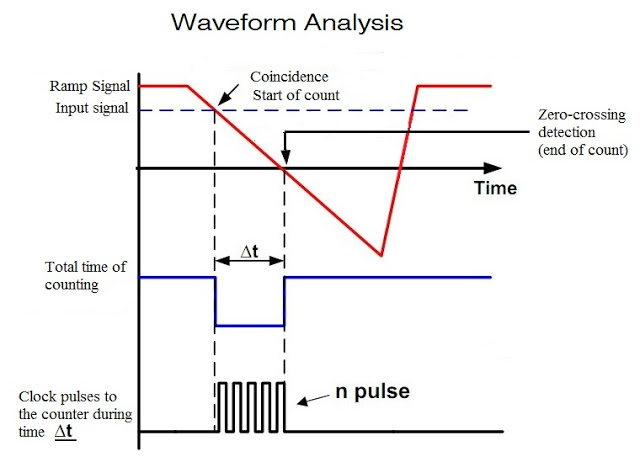 Your referenced article may be describing a system similar to Figure 2. A ramp signal is generated. (This will be a staircase as described in the previous paragraph.) Pulses are counted until the staircase crosses the input value. The pulse count is then converted into a meter reading.

I understand that finally we get our measure by ADC the signal that we know is proportional to the voltage.

That's fine and is explained above.

Question is how is this proportional signal produced and what relations are used.

That is also explained above. We generate a binary pattern, feed that to the ADC and compare the ADC output with the signal to be measured. Then adjust the ADC and try again.

What gets measured really, is this the current measured by the number of charges per time, and how it is measured?

Your voltmeter measures potential difference which is not the same. Current is the flow but voltage is the pressure causing the flow. For resistors the two are related by Ohm's law, \$ V = IR \$. If a current is flowing between two points but there is no resistance to flow then there will be no voltage drop measurable between those two points.

One of the beauties of digital voltmeters is that their input impedance is very high - typically 1 or 10 MΩ. They steal tiny amounts of current from the circuit they are measuring.