I read on the Interwebs that a Darlington can multiply or add the hFEs of the individual transistors, but this isn't the case (at least with BJTs).

What is the real ballpark hFE calc for a NPN Darlington pair, then?

If you really doubt that the Darlington setup you got doesn't work. Set it up according to this schematic to verify it. The 5MΩ is your finger. The red circle is an LED. 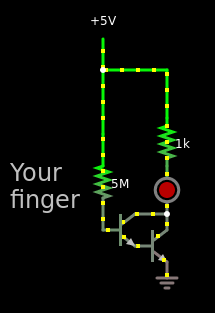 Here's the link to the schematic if you want to mess around.

Not the answer you're looking for? Browse other questions tagged transistors npn darlington or ask your own question.